Radio astronomy gets connected across the UK

By SpaceRef Editor
May 26, 2004
Filed under Astrophysics, Jodrell Bank Observatory, US

Work has started on the construction of an optical fibre network which will
connect five radio telescopes to the giant 76-m Lovell Telescope at Jodrell
Bank Observatory, operated by The University of Manchester in rural
Cheshire. This e-MERLIN network will operate as single radio telescope
spanning 217 km, with unprecedented sensitivity provided by the enormous
data rates carried by the optical fibres. The combination of high
resolution
due to the large separations and high sensitivity will make e-MERLIN a
world-leading astronomical facility, continuing the pioneering spirit
established by Sir Bernard Lovell over 50 years ago, and maintaining
Jodrell
Bank at the forefront of astronomical research well into the 21st century.

The network will use trunk fibres largely provided by Global Crossing UK
with new fibre links from each telescope to the trunks being constructed by
Fujitsu Telecommunications Europe. The total data rate carried by the
network will be a continuous and sustained 150 Gb/s – about five times the
total UK public internet traffic. Finding a way to provide a data network
of
this capacity on a national scale, reaching out to rural telescope sites,
within the very limited project budget has been the largest challenge
facing
the e-MERLIN project. Astronomers and engineers at Jodrell Bank are
delighted to have found a technical and commercial solution which meets
their needs.

The MERLIN network was first established in 1980 and is now operated as a
national facility by the University of Manchester on behalf of the Particle
Physics and Astronomy Research Council. It combines radio telescopes near
Cambridge, Worcester and Oswestry with two telescopes in Cheshire as well
as
the Lovell Telescope. Radio arrays like MERLIN produce detailed radio
images
of stars and galaxies. MERLIN’s strength has been the high resolution
provided by its 217-km span it is the only telescope on the ground which
can
routinely provide images with as much detail as the Hubble Space Telescope
but at radio rather than optical wavelengths. However, its sensitivity has
been limited by the present connections from the remote telescopes to
Jodrell Bank.

By linking the telescopes with optical fibre, the capacity of these
connections will be increased by a factor of more than 100 and together
with
the newly resurfaced Lovell Telescope and improved receivers at each
telescope, e-MERLIN’s sensitivity will be boosted by more than a factor of
30, guaranteeing a wealth of new discoveries as astronomers from the UK and
around the world use it to zoom in on distant stars and galaxies. Dr Simon
Garrington, project manager for e-MERLIN explained: “In an array like
MERLIN, the network which transports the data is performing the same
function as the curved dish of a single large radio telescope, bringing the
radio waves to a common focus. With our present links, we are only able to
transport less than half of one percent of the signal collected by our new
receivers to the correlator at Jodrell Bank but with the new fibre network
we will be able to transport an entire 4 GHz band back to Jodrell Bank.” 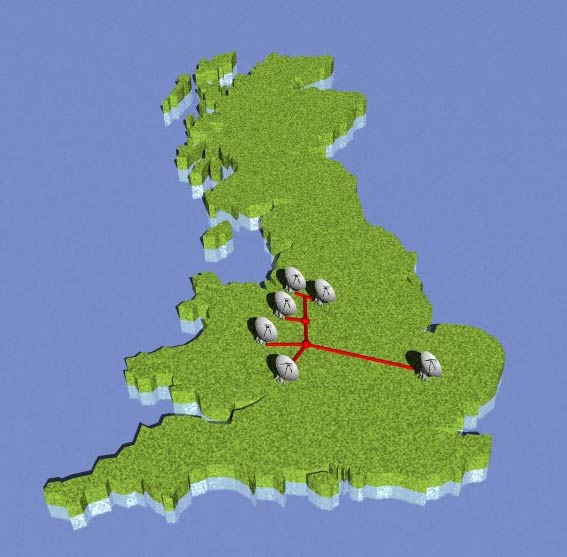 Prof Philip Diamond, Director of MERLIN, said: “Radio astronomy is crucial
to the understanding of our universe because radio waves penetrate the
clouds of cosmic dust and gas that hamper observations with optical
telescopes. Our deepest observations with existing instruments have given
us
glimpses of distant galaxies in the process of formation and we are
confident that e-MERLIN will reveal a radio sky teeming with such galaxies,
any one of which we will be able to study in detail.”

Roshene McCool, the fibre-optic engineer at Jodrell Bank who is designing
the transmission equipment for the network said: “The fibre network
provided
by Fujitsu and Global Crossing allows us to use transmission equipment and
protocols which we have developed with colleagues around the world
specifically for radio astronomy data.”

Phil Metcalf, managing director of Global Crossing Europe, said: “The
high-capacity backbone linking the e-MERLIN array will give UK astronomers
the networking platform they need to open up a new era of discovery.”

Shigeyuki Unagami, managing director of Fujitsu Telecommunications Europe
described the project as “a successful harmony of pioneering science, IT
and telecommunications”.

The e-MERLIN project has been jointly funded by The University of
Manchester, The Northwest Development Agency (NWDA), the Particle Physics
and Astronomy Research Council (PPARC), UMIST and The University of
Cambridge.

To celebrate the start of work on the fibre network a reception was held
today at Jodrell Bank Observatory with representatives from The University
of Manchester, Global Crossing, Fujitsu and the funding partners.

Images from this reception, along with illustrative astronomical and
technical images are available at www.jb.man.ac.uk/news

Professor Andrew Lyne, Director of Jodrell Bank Observatory, said, “This is
an exciting time as the University of Manchester combines with UMIST to
become a new premier research university. E-MERLIN epitomizes the
world-leading initiatives which will be required to achieve this”.

Chris Koral, NWDA Area Manager for Cheshire, said:,”Jodrell Bank
represents
a longstanding symbol of scientific endeavour in the Northwest and this
is a
great achievement which reaffirms its position at the leading edge of world
astronomy. I am delighted that the NWDA has contributed to this important
project, which will help to maintain the region’s reputation for excellence
in the future.”

Professor Ian Halliday, Chief Executive of PPARC said, “With the upgrade to
e-MERLIN, the UK’s National Facility for radio astronomy has ensured that
it
remains at the forefront of international research, enabling UK astronomers
to make important contributions to advancing our understanding of the
Universe.”

Professor Sir Martin Harris, Vice-Chancellor of the University of
Manchester
said,”This is very good news for Jodrell Bank Observatory and further
strengthens its position at the forefront of astronomical research in the
21st century. The e-MERLIN project forms an important part of the work
which
goes on at the Observatory and the Lovell Telescope is a key element of the
array which will benefit from the recent upgrades.”

Notes for Editors are available with the longer version with this release
at: