A team of astronomers from Germany, Bulgaria and Poland have used a completely new technique to find an exotic extrasolar planet. The same approach is sensitive enough to find planets as small as the Earth in orbit around other stars. The group, led by Dr. Gracjan Maciejewski of Jena University in Germany, used Transit Timing Variation to detect a planet with 15 times the mass of the Earth in the system WASP-3, 700 light-years from the Sun in the constellation of Lyra. They publish their work in the journal Monthly Notices of the Royal Astronomical Society.

Transit Timing Variation (TTV) was suggested as a new technique for discovering planets a few years ago. Transits take place where a planet moves in front of the star it orbits, temporarily blocking some of the light from the star. So far this method has been used to detect a number of planets and is being deployed by the Kepler and Corot space missions in its search for planets similar to the Earth.

If a (typically large) planet is found, then the gravity of additional smaller planets will tug on the larger object, causing deviations in the regular cycle of transits. The TTV technique compares the deviations with predictions made by extensive computer-based calculations, allowing astronomers to deduce the makeup of the planetary system.

For this search, the team used the 90-cm telescopes of the University Observatory Jena and the 60-cm telescope of the Rohzen National Astronomical Observatory in Bulgaria to study transits of WASP-3b, a large planet with 630 times the mass of the Earth.

“We detected periodic variations in the transit timing of WASP-3b. These variations can be explained by an additional planet in the system, with a mass of 15 Earth-mass (i.e., one Uranus mass) and a period of 3.75 days”, said Dr. Maciejewski.

This is the first time that a new extrasolar planet has been discovered using this method. The new TTV approach is an indirect detection technique, like the previously successful transit method.

The discovery of the second, 15 Earth-mass planet makes the WASP-3 system very intriguing. The new planet appears to be trapped in an external orbit, twice as long as the orbit of the more massive planet. Such a configuration is probably a result of the early evolution of the system.

The TTV method is very attractive, because it is particularly sensitive to small perturbing planets, even down to the mass of the Earth. For example, an Earth-mass planet will pull on a typical gas giant planet orbiting close to its star and cause deviations in the timing of the larger objects’ transits of up to 1 minute.

This is a big enough effect to be detected with relatively small 1-m diameter telescopes and discoveries can be followed up with larger instruments. The team are now using the 10-m Hobby-Eberly Telescope in Texas to study WASP-3c in more detail. 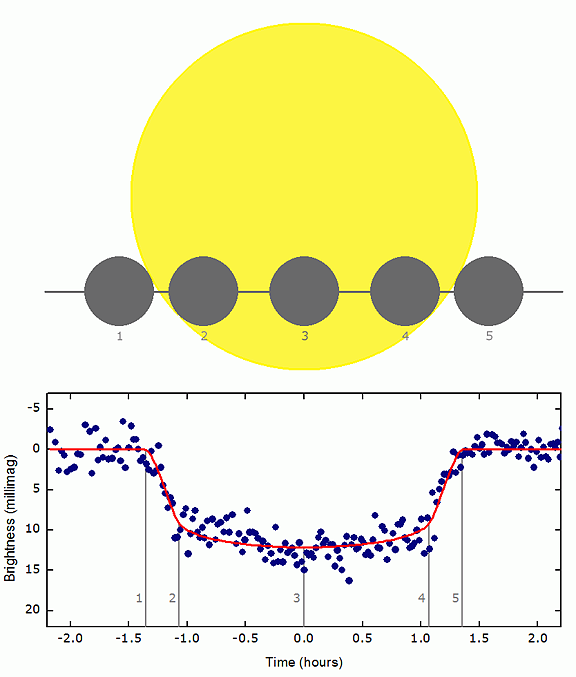 Caption 1: This figure shows the variation in light (the light curve) caused by the transit of the planet WASP-3b. These data originate from observations made on 18 April 2010 with the University Observatory Jena 90-cm telescope. Individual data points are shown as dots. The brightness of the star in millimagnitudes (an astronomical unit of brightness) is plotted against observing time in hours (0.0 marks the center of the transit). The red line is the best fit to the data showing the transit start (or ingress) from first to second tick-marks, mid-transit (3rd tick-mark) and the transit end (egress) from the 4th to the 5th tick-mark. During the ingress, the planet moves fully in front of the stellar disk and during the egress, the planet leaves the stellar disk. Credit: Gracan Maciejewski, Dinko Dimitrov, Ralph Neuhauser, Andrzej Niedzielski et al.

Caption 2: This is the so-called O-C diagram for WASP-3b. We plot the difference between observed (O) transit time and calculated (C) expected transit time on the y-axis in minutes versus the time given as orbital periods of WASP-3b. We plot the previously published transit times as blue dots and our own new measurements as red dots. If there was only one planet around the star WASP-3, then all the points should be on one straight line. With a second planet with 15 Earth masses and a 3.75 day orbital period, the orbital period of WASP-3b is modified in the way shown by the black line. This is indirect evidence for WASP-3c. Credit: Gracan Maciejewski, Dinko Dimitrov, Ralph Neuhauser, Andrzej Niedzielski et al.

Caption 3: This image shows the faint star WASP-3 (magnitude 10.5 or about 60 times fainter than can be seen with the unaided eye) in the center of the image, made using the 90-cm telescope of the University Observatory Jena. The star is enlarged with better sensitivity and resolution in the inlay in the lower left. WASP-3 is at a distance of 700 light-years and is located in the constellation Lyra. North is up, east to the left. The large image is a composite of three images taken using different filters (blue, visual and red) and the small inlay only uses a red filter. Credit: Gracan Maciejewski, Dinko Dimitrov, Ralph Neuhauser, Andrzej Niedzielski et al.

The research is based on the collaborative effort of scientists at the Astrophysical Institute of the Friedrich Schiller University in Jena, Germany, the Institute of Astronomy of the Bulgarian Academy of Sciences in Sofia, Bulgaria, and the Torun Centre for Astronomy of the Nicolaus Copernicus University in Torun, Poland. The work was led by Jena post-doc Dr. Gracjan Maciejewski, originally from Torun, Poland.

The TTV search for planets is funded by both Germany and Poland as a key example of scientific cooperation between the two states and on the Jena side is also supported by the European Union through a Marie-Curie project.

The University Observatory Jena is operated by the Astrophysical Institute of the Friedrich Schiller University and the Rozhen National Astronomical Observatory is operated by the Institute of Astronomy of the Bulgarian Academy of Sciences. On the Jena telescope, a new CCD detector was used, installed partly for this project at the telescope’s so-called Schmidt focus, a project supported by the Thuringian science ministry.

The Royal Astronomical Society (RAS: www.ras.org.uk), founded in 1820, encourages and promotes the study of astronomy, solar-system science, geophysics and closely related branches of science. The RAS organizes scientific meetings, publishes international research and review journals, recognizes outstanding achievements by the award of medals and prizes, maintains an extensive library, supports education through grants and outreach activities and represents UK astronomy nationally and internationally. Its more than 3500 members (Fellows), a third based overseas, include scientific researchers in universities, observatories and laboratories as well as historians of astronomy and others.