An international team of scientists has found some of the most
primitive matter containing abundant interstellar material analyzed to
date amongst dust particles collected from the upper atmosphere by
NASA aircraft. The samples were gathered in April 2003 during the
Earth’s passage through the dust stream left behind by comet
26P/Grigg-Skjellerup. Dr. Henner Busemann of the University of
Manchester will present the results at the European Week of Astronomy
and Space Science at the University of Hertfordshire on Tuesday 21st
April.

“We found an extraordinary wealth of primitive chemical
“fingerprints”, including abundant pre-solar grains, true stardust
that has formed around other earlier stars, some during supernova
explosions, associated with extremely pristine organic matter that
must pre-date the formation of our planets,” said Dr. Busemann. 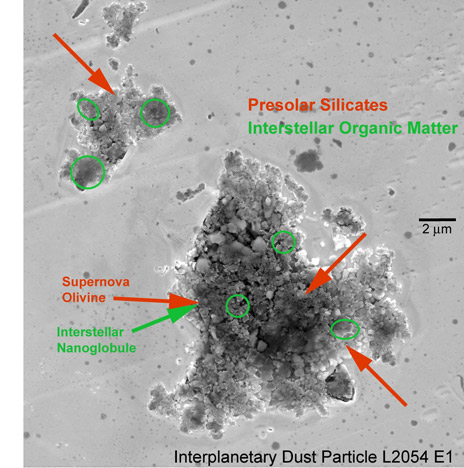 The interplanetary dust particles, which are only a few thousands of a
millimeter in diameter, were analyzed by an international
collaboration from the UK, the US and Germany. Two grains appear to
have percentage levels of material thought to match the nebula from
which the Solar System formed. One dust particle contained four
pre-solar silicate grains with an unusual chemical composition that
matches predictions for silicates formed from cooling gas following a
supernova explosion. One of these grains, a fragment of olivine, was
found next to a hollow, globule of carbon, most likely of interstellar
origin. Organic coatings are suspected to be the time-capsules that
protected and secured the survival of some of these fragile stellar
silicate grains in the radiating space environment.

“These tiny grains combine all the most primitive features, found to
date only separately in various meteorites, samples from the Stardust
mission and interplanetary dust particles. The particular collection
scenario allows us speculate that we truly have samples of a known
source, comet Grigg-Skjellerup, in our hands,” said Dr. Busemann. 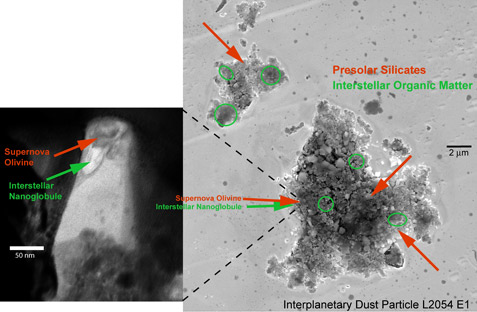 The group compared their findings with Deep Impact observations of
comet 9P/Tempel 1 and analyzes of samples from comet 81P/Wild 2
collected by Stardust. The comparison revealed surprising differences
between the comets, which are all short-period comets with orbits
constrained by Jupiter’s gravitational field. Comet 81P/Wild 2 was
found to have incorporated much higher levels of material formed in
the inner Solar System, however all the comets contained materials
such as carbonates that commonly indicate the presence of water.

The primitive matter, containing unaltered samples of the building
blocks of our Solar System, gives insights into the turbulent
processes leading to the formation of our Solar System and also the
fate of comets orbiting since their formation at the outer edges of
our planetary system. While the planets in the inner solar system,
such as Earth or Mars, once experienced harsh conditions and have
changed substantially over the past 4.5 billion years, comets are
believed to store the original material of the early Solar System,
acting as ‘supersized refrigerators’.

“We still have much to learn from samples of primitive matter
containing large amounts of interstellar grains. Aircraft offer a less
costly way to collect cometary dust, albeit of unknown origin.
Predictions and timed collection campaigns in the future offer an
increased likelihood to analyze material from known comets without
actually going there,” added Dr. Busemann.