By SpaceRef Editor
January 10, 2011
Filed under Astrophysics, University of California, Berkeley, US 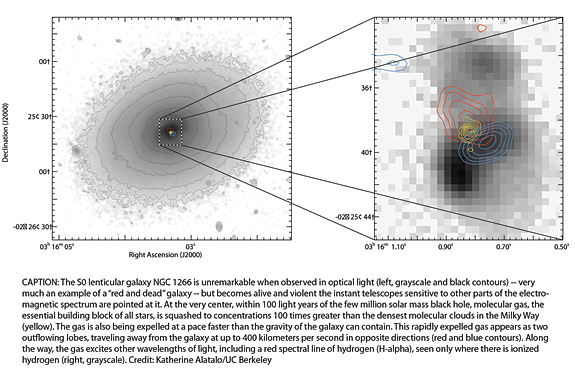 University of California, Berkeley, astronomers may have found the missing link between young gas-filled, star-forming galaxies and older, gas-depleted galaxies typically characterized as “red and dead.”

In a poster to be presented at the American Astronomical Society meeting in Seattle, the researchers report that a long-known “early-type” galaxy, NGC 1266, is expelling molecular gas, mostly hydrogen, from its core.

Astronomers have long distinguished between early-type “red and dead” galaxies, thought to be largely devoid of gas and dust and thus not forming stars, and younger galaxies that are currently forming stars from the raw material molecular hydrogen. One of the outstanding problems in astronomy is how galaxies evolve from being star-forming spirals to “red and dead.”

The galaxy NGC 1266 has such a rapid outflow — about 13 solar masses per year traveling at up to 400 kilometers per second — that it could easily shed all of its molecular gas in less than 100 million years, equivalent to about one percent the age of the Milky Way, according to the researchers.

“This is the first example of an early-type galaxy where all the molecular gas the star-forming gas is concentrated in the nucleus and where we have such a high-resolution picture of what’s going on with the molecular gas in the core,” said Leo Blitz, UC Berkeley professor of astronomy. “We see molecular gas being expelled at speeds that will allow it to escape from the galaxy and return to the intergalactic medium and we see the reservoir of gas from which it’s drawing. That tells us that if things go on at the current rate, the gas will only last another 85 million more years.”

Gas expulsion from the center of the galaxy could be one of many mechanisms that help gas-rich star-forming galaxies evolve into the gas-poor “red and dead” galaxies littering the cosmos, he said.

While most known galactic jets are associated with intense starburst regions in galaxies, this old galaxy doesn’t have enough star formation to drive an outflow, according to UC Berkeley graduate student Katherine Alatalo. A hungry central super-massive black hole could well be the energy source fueling the jets.

Based on optical and radio observations, the molecular gas is concentrated in a small, dense rotating disk about 300 light-years across in the core of the galaxy, instead of being evenly distributed throughout the galactic plane. The rapidly rotating disk in the nucleus confines the outflow into two jets of material that can be seen clearly in radio observations.

“The best way to force all the gas to the center is to smash two galaxies into each other, which provides a way for the gas to lose its angular momentum and fall directly into the center,” Alatalo said. “But there is no evidence that NGC 1266 is undergoing any sort of interaction like that, meaning we don’t know how this gas lost that momentum.”

The region of rapidly swirling gas, located not far from the central black hole, is much like the rotating gas and dust disk from which individual stars form, the researchers said, but is 10 to 100 million times more massive.

“The concentration of gas in the center probably had to have happened rather quickly, yet there is no obvious mechanism for how this happened,” Blitz added. “That allows for the possibility that this is just a pathological galaxy, but it may very well be the first of its kind representing a general case of early-type galaxies that have shed their gas by way of a strong central outflow.”

The ATLAS3D survey consists of optical spectroscopy using the SAURON integral-field unit on the William Herschel Telescope in La Palma, Spain; radio and millimeter observations with the Westerbork Radio Synthesis Telescope in the Netherlands and the Institut de Radioastronomie Millimetrique (IRAM) 30 meter telescope in Granada, Spain; and millimeter observations by the Combined Array for Research in Millimeter-wave Astronomy (CARMA), an Owens Valley, Calif., facility operated by the California Institute of Technology, UC Berkeley, the University of Maryland and the University of Illinois at Urbana Champaign. One of the survey’s goals is to determine how much molecular hydrogen older galaxies harbor.

Evolving to Become “Red and Dead”

Based on observations over many years, astronomers have concluded that these red and dead galaxies have amazingly little molecular gas. One major question has been, Where did it go?

The new, more detailed survey, however, is gathering evidence that these old, early-type galaxies may have more molecular hydrogen than once thought.

“If you look at other galaxies of this type, it was thought that only exceptional cases contain star-forming molecular gas, and only a small fraction contain any gas at all. Before our survey, it was believed that once these types of galaxies lose their gas, they become permanently red and dead,” Blitz said. “Our study is showing that, while they’re still red, they are not so dead, and they may be forming stars at a rate which is controlled by the molecular gas.”

“NGC 1266 is an old, fairly normal looking early-type galaxy that turns out have this deep underbelly of violence going on in the very center,” Alatalo said. “We are still at a loss to explain some of it.”

Alatalo, Blitz and their ATLAS3D team members will detail their results in a paper to be published in The Astrophysical Journal. The work is funded by the National Science Foundation and the National Aeronautics and Space Administration.

An optical image of NGC 1266 and a radio image of the central rotating disk can be obtained online : http://www.berkeley.edu/news/media/releases/2011/01/images/NGC1266.jpg