The names Nix and Hydra have been approved for the two small satellites of Pluto discovered in May 2005. The International Astronomical Union (IAU), the internationally recognized authority for assigning designations to celestial bodies, approved the names this week.

A team of researchers from Southwest Research Institute (SwRI) in Boulder, Colo., the Johns Hopkins University Applied Physics Laboratory (APL) in Laurel, Md., the Space Telescope Science Institute in Baltimore and Lowell Observatory in Flagstaff, Ariz., used Hubble Space Telescope images to make the discovery in support of NASA’s New Horizons mission to Pluto and the Kuiper Belt beyond.

“We’re very pleased with the decision of the IAU,” says co-leader of the discovery team, Dr. Alan Stern, executive director of the SwRI Space Science and Engineering Division and principal investigator of the New Horizons mission. “You’re going to be hearing a lot more about Nix and Hydra in coming years — astronomers are already applying for telescope time to study their orbits and physical properties. And when New Horizons flies by Pluto in the summer of 2015, each will be mapped in detail.”

“Pluto doesn’t reveal its moons easily,” adds discovery team co-leader and New Horizons Project Scientist Dr. Hal Weaver, of APL. “It took 48 years after the discovery of Pluto to find Charon and another 27 years to find Nix and Hydra. Perhaps we won’t have to wait as long for the next discovery because the New Horizons spacecraft will be making a rendezvous with Pluto in nine years and will be searching for other small satellites.” 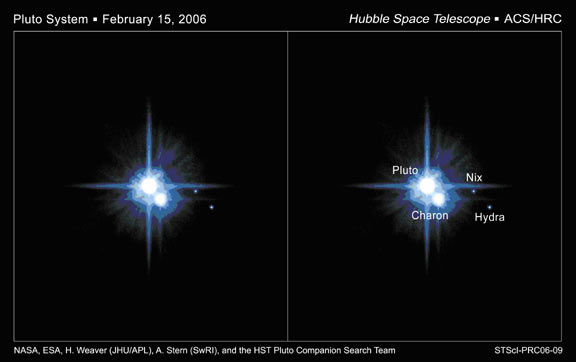 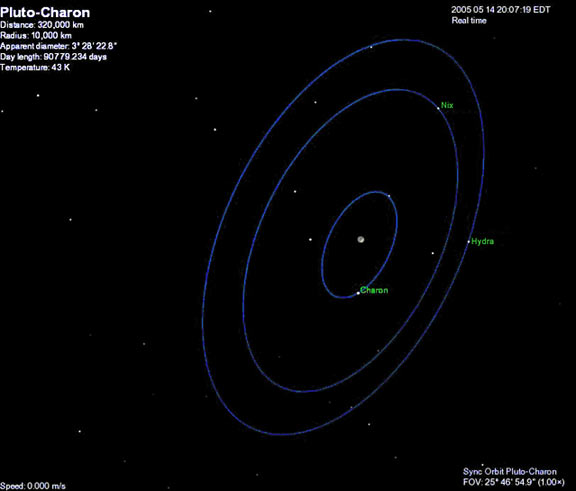 Nix and Hydra have circular, near-resonant orbits in the same plane as Charon, but are more distant from the planet. This strongly supports a common origin for all three satellites and offers new evidence that supports the long-held belief that a giant impact led to the formation of Charon. Credit: NASA/Space Telescope Science Institute (STScI)

Nix and Hydra, roughly 5,000 times fainter than Pluto itself, are about two to three times as far from Pluto as its large moon, Charon, which was discovered in 1978. The nine-member discovery team selected the name Nyx for S/2005 P 2, the inner small satellite, and the name Hydra for S/2005 P 1, the outer small satellite. Because asteroid 3908 already bears the Greek name Nyx, the IAU changed Nyx to its Egyptian equivalent, Nix.

In mythology, Nix is the goddess of darkness and night, befitting a satellite orbiting distant Pluto, the god of the underworld. Nix is also the mother of Charon, relevant to the giant impact believed to have created Pluto’s three satellites, indicating Charon was borne of the material from which Nix formed. Hydra is the terrifying monster with the body of a serpent and nine heads, befitting the outermost moon of Pluto, the ninth planet in the solar system.

In addition, just as Pluto’s name begins with the letters “P” and “L” to honor Percival Lowell, who motivated the search that led to its discovery, Nix and Hydra honor the search for new satellites and the New Horizons mission to Pluto by starting with the letters “N” and “H.” The first letter of Hydra also honors the Hubble Space Telescope that was used to detect the satellites.

Editors: Images to accompany this story are available at http://www.swri.org/press/2006/nixhydra.htm and http://pluto.jhuapl.edu

The Applied Physics Laboratory (APL) is a not for profit laboratory and division of The Johns Hopkins University. APL conducts research and development primarily for national security and for nondefense projects of national and global significance. APL is located midway between Baltimore and Washington, D.C., in Laurel, Md. For information, visit www.jhuapl.edu.

SwRI is an independent, nonprofit, applied research and development organization based in San Antonio, Tx., with more than 3,000 employees and an annual research volume of more than $435 million. For more information, visit www.swri.org.