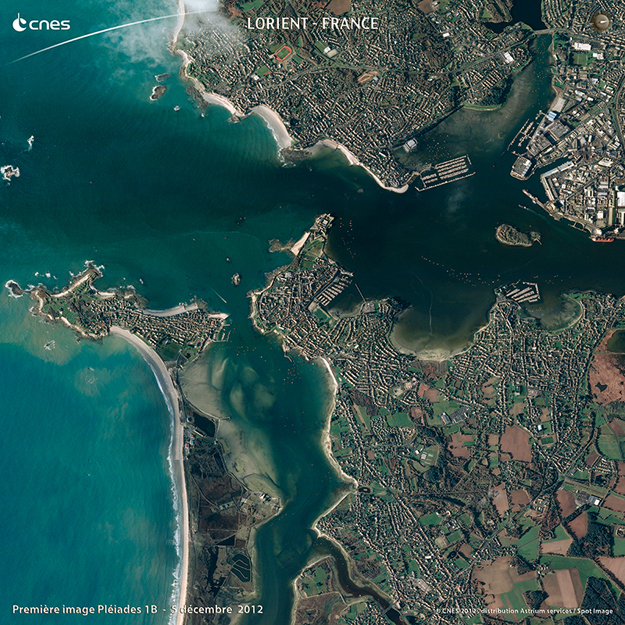 Pleiades 1B has been designed to provide dual use optical observation coverage with a 70-centimeter resolution. It was launched into space from French Guiana on 30 November 2012 and has accompanied its twin, Pleiades 1A, which was launched into space in December 2011. The Astrium division of EADS built both Pleiades satellites for the French CNES space agency for use by the French and Spanish defence ministries, civil institutions, and private users. They are based on smaller, cheaper, more agile platforms than their predecessors – the highly-successful Spot satellite series.

The 200kg, high-resolution optical imaging instrument on board Pleiades is equipped with a panchromatic and multispectral focal plane. Five e2v CCD98-50 imaging sensors equip the panchromatic focal plane; the sensors have 6,000 pixels each (giving 30,000 pixels per line), are back-thinned to improve sensitivity and have Time Delay Integration (TDI) functionality to enable them to capture high resolution images (70cm on-ground resolution). The multispectral focal plane is made up of five e2v AT71554 imaging sensors. These imaging sensors cover four spectral bands, made up of 1,500 pixels each, with each spectral band providing 7,500 pixels once installed in the focal plane.

Bertrand De Monte, marketing manager of high performance imaging at e2v commented “We are very pleased to be continuing our successful relationship with Thales Alenia Space, Astrium, and CNES by supplying high performance image sensors for Pleiades 1B. e2v has provided image sensors for a number of Earth observation satellites including the original Pleiades 1A and SPOT 2, 3, 4, 5, 6 and 7. We look forward to seeing yet more high resolution images of the Earth, made possible by e2v solutions.”

e2v employs approximately 1650 people, has design and operational facilities across Europe, North America and Asia, and has a global network of sales and technical support offices. For the year ended 31 March 2012, e2v reported sales of GBP235m and is listed on the London Stock Exchange. For more information visit e2v.com