The extremely low operational temperature of just a tenth of a degree above absolute zero (0.1 K) has been reached on the detectors of Planck’s High Frequency Instrument (HFI). This makes the HFI detectors the coldest known objects in outer space. The achievement, seven weeks after launch, marks a key milestone for the Planck mission. The spacecraft’s active cooling system has now reached its final operational conditions and the two instruments onboard Planck (HFI and the Low Frequency Instrument, LFI) are now both at their cryogenic operational temperatures.

The design of the Planck spacecraft allows it to cool down passively to about 45 K (-228 °C) by radiating heat towards the cold space environment. However, to reach the required operational temperatures for the two instruments (20K for LFI and down to 0.1 K for HFI) Planck is equipped with a sophisticated active cooling system. This system comprises three different coolers that act on different stages of the two Planck instruments, respectively down to 20K, 4K and 0.1K above absolute zero.

The passive cool down of the spacecraft in the space environment started immediately after launch on 14 May. The two coldest coolers (0.1K dilution cooler and 4K Joules-Thompson cooler) were switched on very shortly after launch, but at a low level. This was done to allow the gas that these stages use for cooling to flow through the system’s pipes, to prevent any potential clogging of these pipes that might be caused by the rapid passive cool-down. 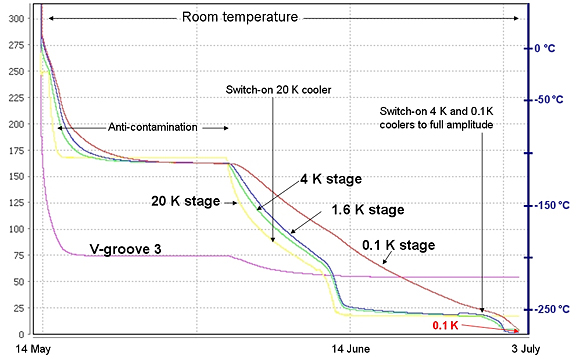 Figure 1. Plot of the temperature versus time for the three coolers of the Planck active cooling system during the cool down to operational temperatures. Credit: ESA and HFI consortium

Two days after launch the coldest of the spacecraft’s three V-grooves – panels that isolate thermally the payload from the hot spacecraft and help to cool the spacecraft by passively radiating excess heat – was already at 75 K. However, the Focal Plane Units (FPUs) of the HFI and LFI as well as the telescope were actively kept at a higher temperature of about 170 K (-103 °C) for two weeks, using dedicated heaters. This was to prevent any contamination, from the spacecraft that is outgassing early in the mission, to freeze onto the surface of these elements.

On 1 June the anti-contamination heaters were switched off and the focal plane and telescope were allowed to resume the passive cool down. Three days later, on 4 June, when the LFI FPU had passively cooled to 100K, the sorption cooler (20 K stage) was switched on. The sorption cooler is responsible for actively cooling the LFI Focal Plane Unit to its operational temperature of 20K and pre-cools the HFI Focal Plane Unit to 18K. Its coldest operational level was reached after nine days, on 13 June, with a temperature of ~17.5K.

As the next steps in activating the cooling system, the remaining two coolers (4K and 0.1K coolers), which had been switched on at a low level shortly after launch, were set to full power one after the other on 28 June. With all coolers of the active cooling chain in operation, the detectors in the HFI Focal Plane Unit finally reached the 0.1K level on 3 July.

For the two instruments HFI and LFI, the next and last phase of their commissioning before the start of nominal science operations is the Calibration and Performance Verification (CPV) phase. This phase will now last until mid August, during which they will carry out specific activities targeted to calibrate both the HFI and LFI. Upon completion of the CPV phase, Planck will start its scientific mission, surveying the whole sky twice over within about one year.

Editor’s notes: The active coolers form part of the two sophisticated instruments onboard Planck, which have been built and delivered to ESA by two large consortia of scientific institutes: the LFI Consortium and the HFI Consortium. See the corresponding links in the right-hand menu for the lists of consortia member institutes and organizations.

The three state-of-the-art coolers of Planck’s active cooling system were provided by: the Jet Propulsion Laboratory (Pasadena, California, US), a member of the LFI and HFI Consortia, built the 20 K cooler; the Rutherford Appleton Laboratory (Didcot, UK), a member of the HFI Consortium, & Astrium UK, built the 4K cooler; and the 0.1K cooler was built in collaboration by the Institut Néel (Grenoble), the Institut d’Astrophysique Spatiale (Orsay, FR), both members of the HFI Consortium, and DTA Air Liquide (Grenoble).