This new Hubble image reveals the gigantic Pinwheel galaxy, one of the best known examples of “grand design spirals”, and its supergiant star-forming regions in unprecedented detail. The image is the largest and most detailed photo of a spiral galaxy ever released.

Giant galaxies weren’t assembled in a day. Neither was this Hubble Space Telescope image of the face-on spiral galaxy Messier 101 (the Pinwheel Galaxy). It is the largest and most detailed photo of a spiral galaxy beyond the Milky Way that has ever been publicly released. The galaxy’s portrait is actually composed from 51 individual Hubble exposures, in addition to elements from images from ground-based photos. The final composite image measures a whopping 16,000 by 12,000 pixels. 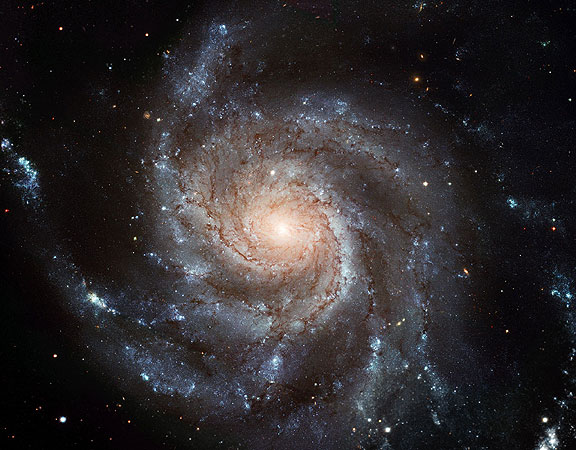 The Hubble observations that went into assembling this image composite were retrieved from the Hubble archive and were originally acquired for a range of Hubble projects: determining the expansion rate of the universe; studying the formation of star clusters in giant starbirth regions; finding the stars responsible for intense X-ray emission and discovering blue supergiant stars. As an example of the many treasures hiding in this immense image, a group led by K.D. Kuntz (Johns Hopkins University and NASA) recently catalogued nearly 3000 previously undetected star clusters in it.

The giant spiral disk of stars, dust and gas is 170,000 light-years across or nearly twice the diameter of our Milky Way. The galaxy is estimated to contain at least one trillion stars. Approximately 100 billion of these stars alone might be like our Sun in terms of temperature and lifetime. Hubble’s high resolution reveals millions of the galaxy’s individual stars in this image.

The Pinwheel’s spiral arms are sprinkled with large regions of star- forming nebulae. These nebulae are areas of intense star formation within molecular hydrogen clouds. Brilliant young clusters of sizzling newborn blue stars trace out the spiral arms. The disk of the galaxy is so thin that Hubble easily sees many more distant galaxies lying behind the foreground galaxy.

The Pinwheel Galaxy lies in the northern circumpolar constellation, Ursa Major (The Great Bear) at a distance of 25 million light-years from Earth. We are seeing the galaxy from Earth today as it was at the beginning of Earth’s Miocene Period when mammals flourished and the Mastodon first appeared on Earth. The galaxy fills an area on the sky of one-fifth the area of the full moon.

The newly composed image was assembled from archived Hubble images taken with the Advanced Camera for Surveys and the Wide Field and Planetary Camera 2 over nearly 10 years: in March 1994, September 1994, June 1999, November 2002 and January 2003. The Hubble exposures have been superimposed onto ground-based images, visible at the edge of the image, taken at the Canada-France-Hawaii Telescope in Hawaii, and at the 0.9-meter telescope at Kitt Peak National Observatory, part of the National Optical Astronomy Observatory in Arizona. Exposures taken through a blue filter are shown in blue, through a green filter in green and through a red filter in red.

CORRECTION: An even larger galaxy mosaic exists: Robert Gendler (http://www.robgendlerastropics.com/) has recently made a 21,904 X 14,454 pixel mosaic of M31 which is bigger than the new Hubble image. We apologize for the inconvenience and thank Robert Naeye (S&T) for pointing out this mistake. –Lars Lindberg Christensen HST/JWST Public Outreach Scientist (PIO), Europe

Notes for editors The Hubble Space Telescope is a project of international cooperation between ESA and NASA.

If you wish to no longer receive these News and Photo Releases, please send an email to distribution@spacetelescope.org with your name.