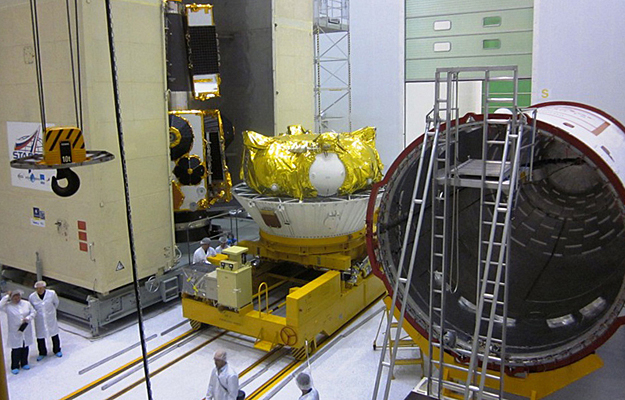 The “stack” of six Globalstar second-generation satellites is partly visible inside the protective container (at left) that was used for its transfer into Starsem’s Upper Composite Integration Facility at Baikonur Cosmodrome. At center is the Fregat upper stage on which the stack will be installed, followed by encapsulation in the payload fairing (positioned at right).

The Soyuz launch campaign for Globalstar’s final batch of second-generation satellites has entered a new phase at Baikonur Cosmodrome, with the “stack” of six spacecraft now positioned in the facility for its mating with the launcher’s upper stage and encapsulation in the payload fairing.

This activity is taking place inside the Upper Composite Integration Facility (UCIF), which is one of three on-site clean rooms operated by Starsem – which is responsible for commercial Soyuz operations from Baikonur Cosmodrome.

The campaign is now ready for installation of the satellite stack atop Soyuz’ Fregat upper stage in the UCIF. Once the payload stack/Fregat stage mating is completed, it will be rotated to the horizontal position, followed by payload fairing encapsulation.

The completed unit will then be transferred to the Cosmodrome’s launch vehicle assembly and integration facility (known by its “MIK 40” Russian designation) for mating with the Soyuz.

Starsem’s upcoming mission is set for February 4, and is the final of four launches currently contracted via Arianespace for orbiting Globalstar’s second-generation constellation. It will be the 26th flight conducted under Starsem’s responsibility since 1999, when the affiliate’s historic commercial Soyuz maiden flight carried four of Globalstar’s first-generation constellation satellites.