By SpaceRef Editor
January 25, 2013
Filed under Commerce, Orbital ATK, US 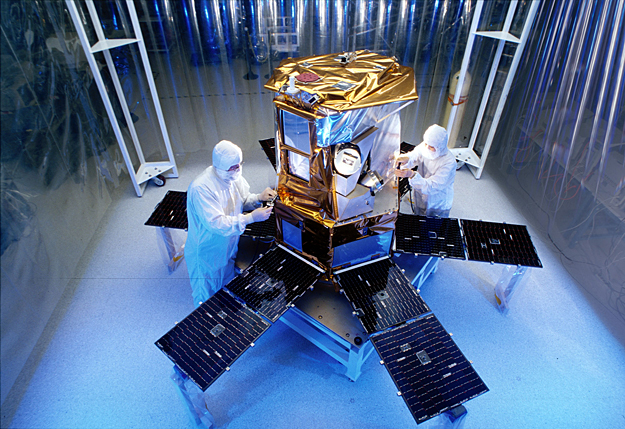 Orbital Sciences Corporation (NYSE: ORB), one of the world’s leading space technology companies, today announced that the company is celebrating the tenth anniversary of the launch and successful operation of the company-built Solar and Radiation Climate Experiment (SORCE) satellite. Ten years ago today, SORCE was launched into orbit aboard Orbital’s Pegasus rocket in a mission that originated from Cape Canaveral, Florida. The original plan for the SORCE mission was to provide continuous solar climate science and Earth atmospheric data for five years. Ten years later, the program’s Mission Operations Center at the University of Colorado’s Laboratory for Atmospheric and Space Physics (LASP) is still receiving valuable data that is shared with the science community worldwide.

“The SORCE mission is an ideal example of how academia, government and industry can partner to advance science investigations and our understanding of the world around us. The Principal Investigator model for developing and operating high-value science missions has proven to be very successful on programs like SORCE and NASA-funded Explorer-class missions,” said Mr. Rob Fulton, Orbital’s Vice President of Business Development and the original Program Manager for SORCE. “The SORCE program is an excellent example of this model, with the spacecraft and overall mission doubling the duration originally planned for the program.”

Scientists who study the Sun and Earth’s environment use SORCE data in conjunction with other measurements to track and analyze the connection between solar changes and atmospheric or climate changes on Earth.

The SORCE science mission and the instruments aboard the spacecraft were conceived, designed and built by LASP. The project’s funding and oversight is provided by NASA’s Goddard Space Flight Center. For more information about the SORCE mission, go to http://lasp.colorado.edu/sorce/index.htm

The SORCE spacecraft is based on Orbital’s LEOStar satellite platform. It was selected by LASP to host the sensitive instruments that record the Sun’s energy and measure all wavelength spectrums. The satellite also carries other instruments that record the level of radiation entering and leaving Earth’s atmosphere. This type of data is valuable to the heliophysics and atmospheric science communities to better understand how solar events affect climate change on Earth.

The SORCE satellite will soon be joined by other Orbital-built LEOStar spacecraft like LDCM (Landsat-8), which will be launched in several weeks, and ICESat-2, which is now in production, in providing long-term continuous data records to help us better understand Earth’s environment. In addition, Orbital’s satellite platforms are also well suited for future government weather missions such as the Joint Polar Satellite System-2 (JPSS-2), the JPSS Free Flyer-1 and the U.S. Air Force’s Weathersat Follow-on.

“The LEOStar family of satellite platforms is ideally suited to the current budget realities our government customers are facing. We are able to offer them an affordable and highly-reliable satellite with which to carry out their essential missions in an efficient and cost-effective manner,” said Mr. Fulton. “These attributes are a primary reason that Orbital has been selected for six of the last nine Explorer missions and that we are teamed with three of the current five finalists under the current selection process.”

Orbital is one of the world’s most experienced companies in the design, development and manufacture of a wide range of satellite products. In its 30-year history, Orbital has built nearly 150 satellites that have supported customer missions ranging from Earth and space science, military and intelligence, and commercial communications for domestic and international customers. Later this year, Orbital-built satellites will pass 1,000 years of cumulative on-orbit experience.