On a theme of “10,” Arianespace completes another year of launch successes 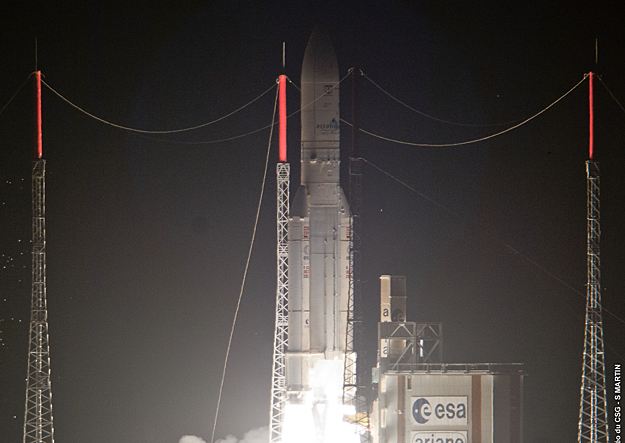 Arianespace’s Ariane 5 flight with the Skynet 5D and Mexsat Bicentenario satellite passengers today wrapped up another busy year of company launch activity, with its successes highlighted by the theme of “10.”

During 2012, the Arianespace launcher family performed a total of 10 missions from the Spaceport in French Guiana, led by the heavy-lift Ariane 5 with its 10-metric-ton payload lift performance – which has logged 53 consecutive successes during the past 10 years.

“It confirms the interest, effectiveness and availability of our launcher product line – which enables us to launch all satellites, for all of our customers, to all orbits,” he said during comments after today’s flight. “In addition, 2012 also marked a yearly record in terms of payload mass placed into orbit, since – for the first time – we have reached a total of nearly 75 tons, of which 20 tons was for the Edoardo Amaldi Automated Transfer Vehicle!”

The Arianespace launcher family missions performed from French Guiana this year were composed of seven heavy-lift Ariane 5 flights, two with the medium-lift Soyuz, and the lightweight Vega’s inaugural launch.

Le Gall paid homage to all of the players who contributed to the 2012 successes, including the European Space Agency, France’s CNES space agency, the Spaceport teams in French Guiana, Europe’s industrial network for Ariane and Vega, the Russian companies for Soyuz, and the team at Arianespace.

Along with the Spaceport’s launch successes was an additional Soyuz mission – performed from the Baikonur Cosmodrome in Kazakhstan by Arianespace’s Starsem affiliate.

For tonight’s mission, Ariane 5 deployed its Skynet 5D payload first, followed by Mexsat Bicentenario during a 36-minute flight profile that came after an on-time departure from French Guiana at 6:49 p.m.

Skynet 5D was orbited for Astrium Services as the fourth in the British military’s Skynet 5 satellite system, and weighed approximately 4,800 kg. at launch. This spacecraft is designed to reinforce and extend the operational services provided by the three other Skynet 5 satellites – all orbited by Ariane 5 – and will be located over the Middle East at a 53 deg. East orbital slot. The Skynet program is operated as a Private Finance Initiative with the United Kingdom’s Ministry of Defence.

Mexsat Bicentenario weighed an estimated 3,000 kg. for liftoff, and is based on Orbital Sciences Corporation’s GEOStar-2 platform. It is to provide communications services to Mexico and its surrounding waters from the 114.9 deg. West Longitude orbital slot. Orbital was designated by Boeing to provide the Fixed Satellite Services (FSS) segment of the Mexsat satellite system for the Federal Government of Mexico.

As Arianespace celebrated a 2012 to remember in terms of its launch activity, the company already is looking to next year’s activity. Preparations are well advanced for a Starsem Soyuz mission from Baikonur Cosmodrome with six Globalstar constellation spacecraft at the start of February, as well as an Ariane 5 launch at the Spaceport – which is to orbit the Amazonas 3 and Azerspace/Africasat-1 telecommunications satellites during the first week in February.