By SpaceRef Editor
February 11, 2015
Filed under Earth Science, US 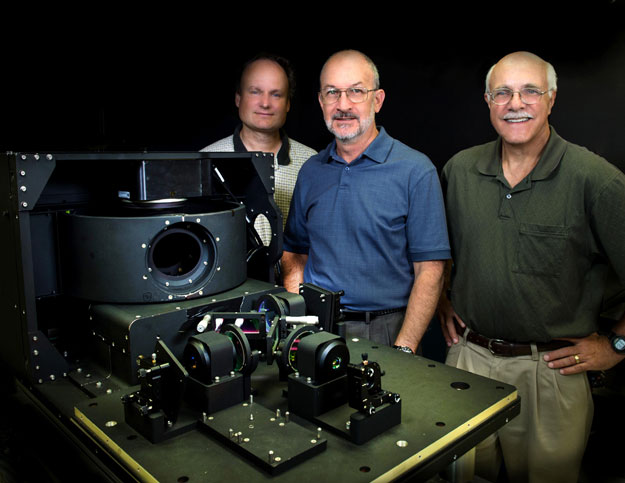 Its name refers to one of the biggest animals in the sea, but ORCA, the Ocean Radiometer for Carbon Assessment instrument, will be observing the smallest.

If selected for a flight mission, ORCA will study microscopic phytoplankton, tiny green plants that float in the upper layer of the ocean and make up the base of the marine food chain.

Conceived in 2001 as the next technological step forward in observing ocean color, the ORCA-development team used funding from Goddard’s Internal Research and Development program and NASA’s Instrument Incubator Program (IIP) to develop a prototype. Completed in 2014, ORCA now is a contender as the primary instrument on an upcoming Earth science mission.

Should it be chosen, ORCA will take ocean-color monitoring to the next level, helping scientists to more precisely measure marine photosynthesis, which is key to the carbon cycle and the ocean food chain.

Like its predecessors that also measured ocean color, the instrument will observe phytoplankton, which blooms en masse, covering hundreds of square miles of the sea surface at once and leaving a trail that is clearly visible from space. In particular, researchers will observe global changes in ocean color to estimate concentrations of chlorophyll, the pigment plants use for photosynthesis — the process during which the tiny plants convert energy from the sun and carbon dioxide into organic compounds that support life.

About a fourth of man-made carbon dioxide ends up in the ocean, said Chuck McClain, former ORCA principal investigator with Goddard’s Ocean Color Group. “The ocean is a big sink for CO2 and part of that sink involves ocean biology.”

ORCA builds on the work Goddard scientists and engineers pioneered in the development of ocean color sensors. Goddard’s proof-of-concept — the Coastal Zone Color Scanner that flew on Nimbus-7 from 1978 to 1986 — was the first sensor to demonstrate that ocean chlorophyll could be measured from space. NASA’s Sea-Viewing Wide Field-of-View Sensor mission, which collected data from 1997 to 2010, was the first flagship mission to routinely observe ocean color for long-term climate research. Currently, researchers employ the Moderate Resolution Imaging Spectroradiometer on NASA’s Terra and Aqua spacecraft, and the Visible Infrared Imager Radiometer Suite aboard the Suomi National Polar-orbiting Partnership satellite. 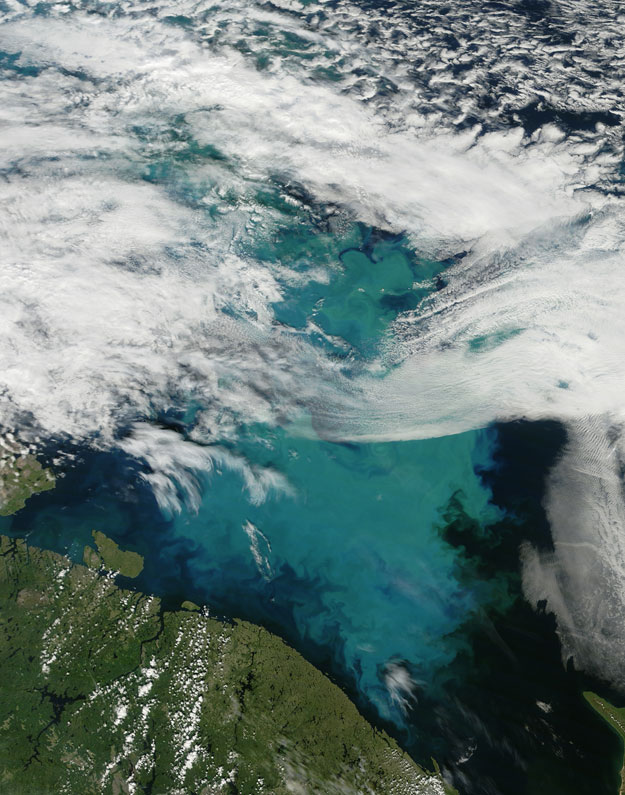 The area in this Aqua-MODIS image is located immediately north of the Scandinavian Peninsula. The intersecting waters, plus stiff winds, promote mixing of waters and of nutrients from the deep. The phytoplankton blooms are seen as bluish-green in color. Image Credit:  NASA/Norman Kuring

What sets ORCA apart from its predecessors is its hyperspectral capability. Instead of observing a handful of discrete bands at specific wavelengths reflected off the ocean, ORCA measures a range of bands, from 350 nanometers to 900 nanometers at five-nanometer resolution. Instead of having to choose one shade to represent each color of the rainbow, ORCA will see the entire rainbow, including the color gradations of green that fade into blue. In addition to the hyperspectral bands, the instrument has three short-wave infrared bands that measure specific wavelengths between 1200 and 2200 nanometers for atmospheric applications.

“That’s over a hundred wavelengths we measure,” McClain said. “We start way down in the ultraviolet, really short wavelengths and we go clear out to the short wave infrared.” To date, no satellite ocean color instrument offers this wavelength range. More and continuous wavelengths mean more data and more refined observations of the upper layers of the ocean, he said.

“When you have more information about the spectrum of the water, then you can do a better analysis of what is in the water. Most phytoplankton species are green, but they have different types of green, so they have slightly different spectra. You need a lot of different wavelengths to discern these differences,” said Gerhard Meister, ORCA’s principal investigator.

In particular, researchers will obtain more accurate measurements of chlorophyll concentrations. The concentration reflects the size of the phytoplankton bloom and how much carbon it holds. Detecting chlorophyll in various wavelengths also will allow researchers to distinguish between types of phytoplankton. Researchers also could collect information on the other types of particles present, such as suspended sediments in coastal regions.

The ORCA prototype has a scanning telescope designed to sweep across 2,000 kilometers (1,243 miles) of ocean at a time. It collects light reflected from the sea surface that then passes through a series of mirrors, optical filters, gratings, and lenses. These components direct the light onto an array of detectors that cover the full range of wavelengths.

The goal of the prototype’s development was to get ORCA as close as possible to flight readiness with minimal risk, McClain said. “Part of the IIP project was not only to build it, but also go through a very thorough performance evaluation,” he said. “We tried to certify that we met all performance requirements, everything that we could do without having a flight instrument. We were successful in doing that.”

Meister concurs. “When we got actual data from the instrument, we realized, wow, this is a good instrument,” he said.

Now that the prototype is complete, the ORCA team is waiting for the green light to begin working on a version that will fly in space.