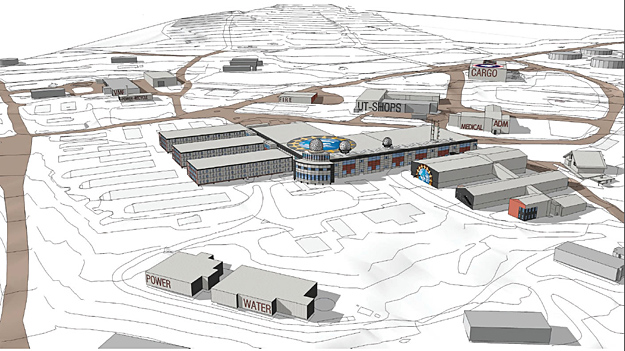 The National Science Foundation (NSF) has issued a summary response to the recommendations of an external panel of experts that was charged with advising the agency on how to improve and streamline its logistical capabilities to more efficiently support world-class Antarctic science in coming decades.

The NSF document, which was made public on March 21, is the agency’s response to the report, More and Better Science in Antarctica Through Increased Logistical Effectiveness, which was released in July of 2012 by the U.S. Antarctic Program Blue Ribbon Panel.

NSF and the White House Office of Science and Technology Policy (OSTP) co-commissioned the independent assessment of U.S. Antarctic Program logistics. Norman R. Augustine chaired the 12-member panel. Augustine was also chair of an external panel in 1990 whose recommendations led to the construction of a new research station at the South Pole.

NSF, through the Division of Polar Programs in its Geosciences Directorate, manages the United States Antarctic Program, through which it coordinates all U.S. research on the southernmost continent and aboard vessels in the Southern Ocean. The agency is also responsible for providing all of the logistical support required to carry out that research.

In the document, NSF responds directly to the 10 overarching recommendations made by the Blue Ribbon Panel.

Those topical areas are:

NSF’s response to the Blue Ribbon Panel was produced by an internal team of senior managers from various NSF offices and directorates, including the Division of Polar Programs.

In his cover letter to Augustine, NSF Director Subra Suresh commented, “You will note that… substantial progress has already been made on many fronts in implementing these recommendations.”

He added, “I am confident that the changes we have put in place will enable us to strengthen our world-leading U.S. Antarctic Program.”

The Blue Ribbon Panel report was the second document issued in a two-part, multi-year review of the nation’s program of research in Antarctica.

In December of 2011, a committee of the National Research Council (NRC) issued its report, Future Science Opportunities in Antarctica and the Southern Ocean.

The Blue Ribbon Panel took into account the findings of the NRC report, as well as information gathered during site visits to NSF’s three year-round stations in Antarctica, in formulating its recommendations.

NSF’s Response to the Blue Ribbon Panel notes that the panel “concluded that ushering in a new age of Antarctic science simply by expanding traditional methods of logistical support would be prohibitively costly” and therefore focused on more cost-effective and efficient ways to increase flexibility as research frontiers evolve over time.