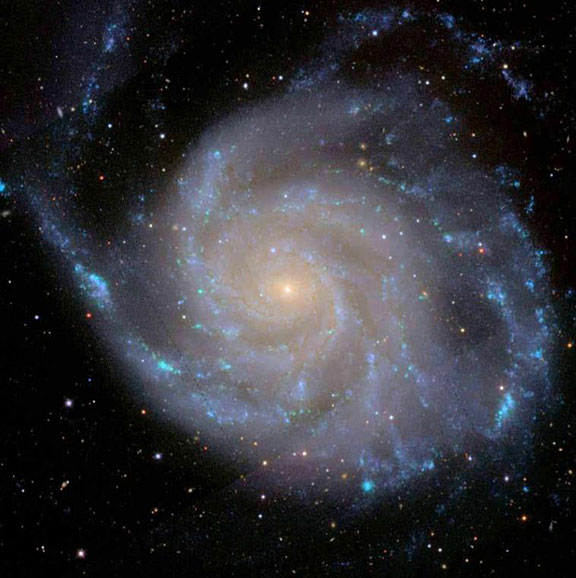 Massive black holes have been found at the centers of almost all galaxies, where the largest galaxies — who are also the ones embedded in the largest halos of dark matter — harbor the most massive black holes. This led to the speculation that there is a direct link between dark matter and black holes, i.e., that exotic physics controls the growth of a black hole. Scientists at the Max Planck Institute of Extraterrestrial Physics, the University Observatory Munich, and the University of Texas in Austin have now conducted an extensive study of galaxies to prove that black hole mass is not directly related to the mass of the dark matter halo but rather seems to be determined by the formation of the galaxy bulge. Their findings are published in a Letter to the journal Nature on 20th January.

Image: Messier 101 (NGC 5457, a galaxy with a massive dark halo but no bulge and no detected black hole. Observations show that this giant galaxy cannot contain a black hole that is even as small as the relatively small black hole in our Milky Way galaxy. Image Credit: wikisky.org

Galaxies, such as our own Milky Way, consist of billions of stars, as well as great amounts of gas and dust. Most of this can be observed at different wavelengths, from radio and infrared for cooler objects up to optical and X-rays for parts that have been heated to high temperatures. However, there are also two important components that do not emit any light and can only be inferred from their gravitational pull.

All galaxies are embedded in halos of so-called dark matter, which extends beyond the visible edge of the galaxy and dominates its total mass. This component cannot be observed directly, but can be measured through its effect on the motion of stars, gas, and dust. The nature of this dark matter is still unknown, but scientists believe that it is made up of exotic particles unlike the normal (baryonic) matter, which we, the Earth, Sun, and stars are made of.

The other invisible component in a galaxy is the supermassive black hole at its center. Our own Milky Way harbors a black hole, which is some four million times heavier than our Sun. Such gravity monsters, or even larger ones, have been found in all luminous galaxies with central bulges where a direct search is feasible; most and possibly all bulgy galaxies are believed to contain a central black hole. However, also this component cannot be observed directly, the mass of the black hole can only be inferred from the motion of stars around it.

In 2002, it was speculated that there may exist a tight correlation between the mass of the black hole and the outer rotation velocities of galaxy disks, which is dominated by the dark matter halo, suggesting that the unknown physics of exotic dark matter somehow controls the growth of black holes. On the other hand, it had already been shown a few years earlier that black hole mass is well correlated with bulge mass or luminosity. Since larger galaxies in general also contain larger bulges, it remained unclear which of the correlations is the primary one driving the growth of black holes.

To test this idea, the astronomers John Kormendy from the University of Texas and Ralf Bender from the Max Planck Institute for Extraterrestrial Physics and the University Observatory Munich carried out high-quality spectral observations of many disk, bulge, and pseudobulge galaxies. The increased accuracy of the resulting galaxy dynamics parameters led them to the conclusion that there is almost no correlation between dark matter and black holes.

By studying galaxies embedded in massive dark halos with high rotation velocities but small or no bulges, John Kormendy and Ralf Bender tried to answer this question. They indeed found that galaxies without a bulge — even if they are embedded in massive dark matter halos — can at best contain very low mass black holes. Thus, they could show that black hole growth is mostly connected to bulge formation and not to dark matter.

“It is hard to conceive how the low-density, widely distributed non-baryonic dark matter could influence the growth of a black hole in a very tiny volume deep inside a galaxy,” says Ralf Bender from the Max Planck Institute for Extraterrestrial Physics and the University Observatory Munich. John Kormendy, from the University of Texas, adds: “It seems much more plausible that black holes grow from the gas in their vicinity, primarily when the galaxies were forming.” In the accepted scenario of structure formation, galaxy mergers occur frequently, which scramble disks, allow gas to fall into the center, and thus trigger starbursts and feed black holes. The observations carried out by Kormendy and Bender indicate that this must indeed be the dominant process of black hole formation and growth.

Messier 101 (NGC 5457), a galaxy with a massive dark halo but no bulge and no detected black hole. Observations show that this giant galaxy cannot contain a black hole that is even as small as the relatively small black hole in our Milky Way galaxy. Image credit: wikisky.org

NGC 6503, another example of a bulgeless galaxy with a massive halo and a small black hole. Image credit: wikisky.org

Messier 31 (NGC 224), the neighbor of our Milky Way, with a large classical bulge. As was shown by Bender, Kormendy, and collaborators in 2005, this galaxy contains a black hole of 140 million solar masses, about 40 times bigger than the black hole in our own galaxy (Astrophysical Journal 631, 280). Image credit: wikisky.org

The Sombrero galaxy (M104, NGC 4594) is another example of a bulge-dominated galaxy. The Sombrero contains a black hole of 1,000 million solar masses as measured by Kormendy, Bender, and collaborators in 1996 (Astrophysical Journal 473, L91). Image credit: HST, STScI