We detected light emissions in the nightside Martian atmosphere with the SPICAM ultraviolet (UV) spectrometer on board Mars Express. The UV spectrum of this nightglow is composed of hydrogen Lyman a emission (121.6 nanometres) and the g and d bands of nitric oxide (NO) (190 to 270 nanometres) produced when N and O atoms combine to produce the NO molecule. N and O atoms are produced by electron UV photodissociation of O2, CO2 , and N2 in the dayside upper atmosphere and transported to the night side. The NO emission is brightest in the winter south polar night because of continuous downward transport of air in this region at night during winter and because of freezing at ground level.

Airglow spectroscopy and radiometry are powerful methods for remote sensing investigations of the physics of upper atmospheres of the terrestrial planets. For instance, Martian dayglow spectra reveal the effect of solar extreme ultraviolet (EUV) radiation on upper atmosphere CO2 as a major heating mechanism and on production of an ionosphere. On Venus, the observed UV nightglow is composed of weak O emissions, as a signature of electron precipitations capable of maintaining a night-time ionosphere, and stronger spectra of O2 and NO molecules, from radiative recombination of N and O atoms produced on the dayside and transported to the night side. Thus, these NO and O2 emissions are important tracers of atmospheric transport at high altitudes, constraining general circulation models. Up to now, however, nightglow from Mars had escaped detection.

The SPICAM instrument on board Mars Express is a UV-infrared dual spectrometer dedicated primarily to the study of the atmosphere and ionosphere of Mars but also capable of providing important results on the surface albedo of Mars. A UV imaging spectrometer (118 to 320 nm, spectral resolution of 1.5 nm, intensified charge coupled device) is dedicated to nadir viewing, limb viewing, and atmospheric vertical profiling by stellar and solar occultations.

The UV channel of SPICAM is a full UV imaging spectrometer that spatially resolves 288 spectra along its slit but, because of telemetry constraints, only five spectra can be transmitted for each 1-s measurement. These spectra are usually a sum of n individual spectra, with n = 32 in the present case, forming five-band spectra (numbered from 0 to 4). The slit of the spectrometer, placed at the focus of the parabolic mirror, has two parts: a narrow part, achieving a spectral resolution of 1.5 nm, and a wide part, achieving a higher (10 times greater) photometric sensitivity for extended sources at the expense of a reduced spectral resolution (6 nm). Two-band spectra were acquired with the narrow slit, and three-band spectra with the wide slit, during each second in the observations reported here.

At the time of this observation [orbit 734, 16 August 2004, 07:00 UT], the orbit of Mars Express had its pericentre on the night side, at an altitude of 266 km and a latitude of –16°. The orbit is almost polar, and Mars Express was descending from north to south. The attitude was fixed in an inertial system (departing from the usual nadir pointing near pericentre), so that the line of sight (LOS), which is aligned with the + Z body axis of the spacecraft, provided a grazing view of the limb while Mars Express was passing through its pericentre (±600 s). As a result, the altitude of the tangent point of the LOS [Mars Nearest Point (MNP)] changed from 375 km to a minimum of 15 km and back to 422 km. At the same time, the latitude changed from –11° to –70°. The whole altitude range at the limb was therefore scanned twice but at different latitudes on the descending and ascending branches. The spectrometer slit was maintained parallel to the limb. 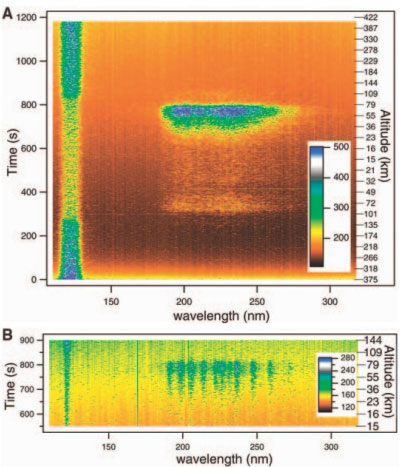 The observations were taken around pericentre of orbit 734, Mars was at a solar distance of 1.66 AU (astronomical units), and the season was Ls= 74°, near the northern summer. Figure 1A (top) is a colour-coded image of the time series of spectra of band 4 (low resolution). The most obvious spectral features are the H Lα emission, visible at all times, and a broad band emission in the region between 190 and 270 nm of variable intensity, only present when the MNP altitude is lower than ~80 km. The higher resolution of band 0 (Fig. 1B) reveals a well-structured band, with shapes that look constant.

By summing a number of spectra, we obtained the calibrated spectrum (Fig. 2) and identified the γ and δ bands of nitric oxide NO (respectively, transitions A2Σ+-X2Π and C2 Π-X2Π). 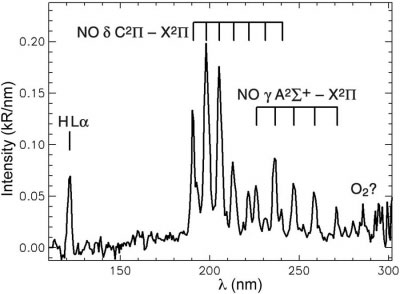 Photons are produced when N and O atoms combine to form the NO molecule. Our identification is eased by its similarity with the case of Venus. Although some UV Venus nightglow had been detected with Mariner 5 and Pioneer Venus, the first spectrum was acquired with International Ultraviolet Explorer (IUE) and identified as NO radiative recombination. It was proposed that N and O atoms are produced on the Venus day side by EUV photodissociation and transported to the night side where recombination occurs, a mechanism later supported by detailed Pioneer Venus spectra and three-dimensional modelling of Venus atmospheric circulation. We therefore propose that the same mechanism is responsible on Mars for our observed NO emission.