News about Tabby’s star, the most mysterious star of 2017 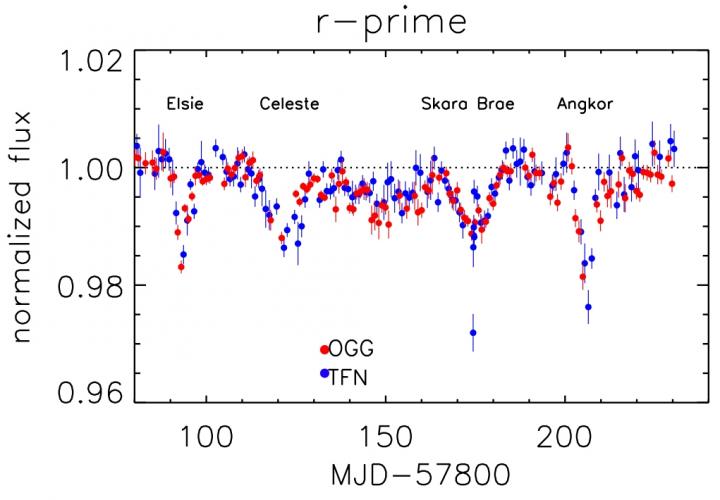 KIC 8462852, or “Tabby’s Star” named after Tabetha Boyajian, the researcher at Louisiana State University (USA) who is leading its study, is a medium sized star, some 50% bigger than the Sun, and 1,000 degrees hotter, at a distance of around 1000 light years. However its brightness has been rising and falling sporadically, without a known explanation. Many theories and speculations of different types have been proposed to explain the unusual light curve of the star, including a mega structure built by aliens orbiting around it.

This mysterious Tabby’s star, in the constellation of Cygnus, has caused tens of telescopes around the world to observe it during 2017, including the Gran Telescopio Canarias (GTC), the Mercator Telescope, the Nordic Optical Telescope (NOT) and the Telescopio Nazionale Galileo (TNG), all of them at the Roque de los Muchachos Observatory (Garafía, La Palma) and the network of telescopes of the Las Cumbres Observatory (LC0) group, which include a 40 cm telescope at the Teide Observatory (Izaña, Tenerife). As a result a new data set has been obtained, which is presented today in two articles, one by a large team led by Tabetha Boyajian, and the other led by Hans Deeg, a researcher at the IAC/ULL.

“Since the discovery of Tabby’s star, using data which extend over five years’ observations, finally we are in a position to present new, convincing ideas about the nature of this strange object”, says Hans Deeg.

Scientists have been observing this star closely with the telescopes of the Las Cumbres Observatory from March 2016 until December 2017. In May of last year, when a team led by the researcher Marian Martínez was observing it with the Mercator telescope, the LCO network detected the beginning of a reduction by 1% in the brightness of the star for a few days. Following these observations, follow-up of observations of the star were started with high-resolution spectroscopy using NOT and TNG in addition to Mercator, involving several researchers from groups specializing in fields as diverse as solar physics, massive star physics and exoplanets.

In parallel the team led by Hans Deeg was prepared to observe it with the 10m GTC, awaiting for the moment when Tabby’s star would “wake up”. Using the OSIRIS instrument on the GTC they measured the colour of the star with high precision during this, and other episodes of dimming during 2017. It is very likely that interstellar dust causes the light from the star to dim, and then brighten. The new data show that the different colours in the light are being attenuated differently. “For this reason” infers Roi Alonso, a researcher at the IAC/ULL and another of the authors, “we know that the material which is interposed between us and the star is not opaque, as would be expected if it were a planet, or an alien mega structure”.

However the method used to study this star is leading the way to a new era in astronomy. Amateur astronomers, called “Planet Hunters” have been among those who, sifting through huge quantities of data from NASA’s Kepler mission, detected the unusual behaviour of the star in 2015, years after the end of the mission in 2013. And in addition the observations with the LCO telescope network have been possible, at least in part, by the 90,000€ raised in a crowdfunding campaign organized by Boyajian for this purpose. “Yet again, without citizen support we would not have obtained this large quantity of data”, states this researcher, who is an author on both articles.

However not all the answers are known. At the present time the teams which are observing on the GTC, as well as those around the world, are waiting for Tabby’s star to wake up again, and show stronger dimming, from 10% to 20% as found in the observations from Kepler over 5 years ago. Although the present data support the hypothesis that the star is within a large dust cloud, which produces the attenuation, observing future deep fluctuations it is hope that the puzzle presented by this star will finally be solved.

The Observatories of the Instituto de Astrofísica de Canarias (IAC) and the Gran Telescopio CANARIAS (GTC) are part of a network of Singular Scientific and Technical facilities (ICTS) in Spain.