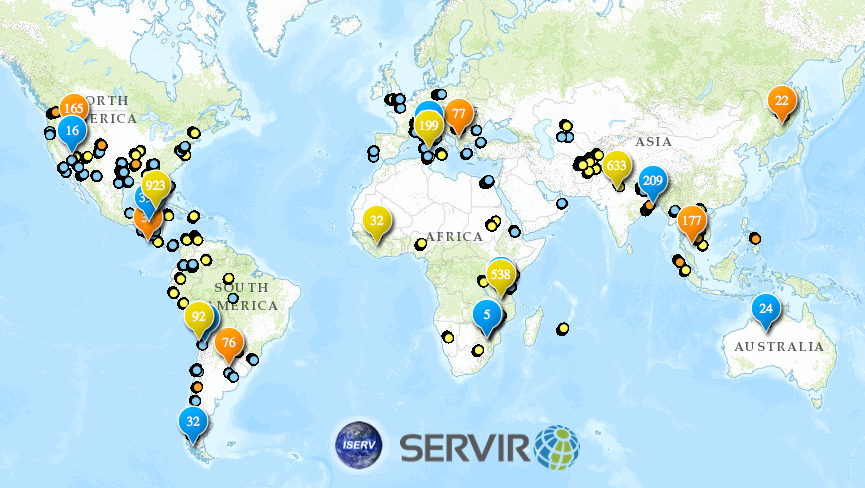 Flipping through online photo albums and social media collections of “selfies” is one thing, but when pictures can show land areas where millions of people live, it can put things in a completely different perspective – especially for scientists.

One of NASA’s newest tools for effective Earth observation has been orbiting our planet for more than 15 years. The International Space Station provides a constant, reliable perspective from which to record changes on the surface of Earth.

A new user-friendly online resource will provide images from a space station camera with nearly two years of images to share. The interface is a world map that links to thousands of images made by the ISERV camera: the International Space Station SERVIR Environmental Research and Visualization System. With the click of a mouse, the public can access the images with the ISERV Viewer.

People can view and download specific ISERV captures from a collection of more than 4,000 Earth images. ISERV scientists plan to expand the database to about 60,000 by summer 2015.

ISERV was installed as a technology testbed in the Window Observational Research Facility (WORF) on the orbiting laboratory in January 2013 and is scheduled to be removed from operation in 2015. The camera receives and acts on commands from the ISERV team to acquire image data of specific areas of Earth’s surface as the space station passes overhead.

Images from ISERV are uploaded quickly to the web due to a new automated georeferencing capability, allowing imagery to be processed and published much faster. This is critically important when dealing with a disaster situation. Georeferencing is a process in which points in an image can be associated with geographic locations on a map. Developed by the ISERV ground team, the automated system uses the space station orbit and position data, along with the acquisition time information contained within each image to establish location on Earth and post it on the online map.

The ISERV camera is part of the SERVIR Earth observation program. For 10 years, SERVIR — an acronym meaning “to serve” in Spanish — has been a successful collaboration between NASA and the U.S. Agency for International Development, or USAID. The program provides satellite-based Earth observation data and science applications to help developing nations in Central America, Africa and Asia assess environmental threats and the damage from — and their response to — natural disasters.

“ISERV has demonstrated the value of Earth observation from the International Space Station for decision makers and disaster responders around the world,” says Burgess Howell, ISERV principal investigator at NASA’s Marshall Space Flight Center in Huntsville, Alabama. “This new image portal will provide public access to a vast array of images over much of the populated area of Earth.”

With ISERV, the SERVIR team has pioneered using the space station to support humanitarian relief and disaster support in underserved regions of the globe.

“Nearly 95 percent of the planet’s populated area is visible during the station’s orbit,” said William Stefanov, PhD., associate program scientist for Earth observations in the International Space Station Program Science Office at NASA’s Johnson Space Center in Houston. “Imagery captured by ISERV provides valuable information to the scientists and governments around the world to assist in environmental assessments and disaster situations.”

The SERVIR project operates via regional “hubs” in Nairobi, Kenya; Kathmandu, Nepal; and Panama City, Panama, and is coordinated at NASA’s Marshall Space Flight Center. The SERVIR hubs can task the ISERV system to image scenes of Earth’s surface in their regions of interest to address environmental issues and disasters.

Much as parents can look back to see how their child has changed over the years, scientists hope that the snapshots gathered by ISERV of land areas before and after environmental changes will improve future response to natural disasters.

For more information about SERVIR, visit the program website: