In early 2007 New Horizons flew through the Jupiter system, getting a speed-boost from the giant planet’s gravity while snapping stunning, close-up images of Jupiter and its largest moons.

Fast forward to 2010 and New Horizons has given us another glimpse of old friend Jupiter, this time from a vantage point more than 16 times the distance between Earth and the Sun, and almost 1000 times as far away as when New Horizons reconnoitered Jupiter. While the planet is too far for the camera to pick up the swirling clouds and brewing, Earth-sized storms it saw just three years ago, “the picture is a dramatic reminder of just how far New Horizons, moving about a million miles a day, has traveled,” says mission Principal Investigator Alan Stern, of the Southwest Research Institute.

The photo, one of three taken on June 24, also marked a successful test. Project Scientist Hal Weaver says the pictures were part of an Annual Checkout activity to have the Long Range Reconnaissance Imager (LORRI) “see” objects relatively close to the Sun (from LORRI’s point of view). The angle between Jupiter, New Horizons and the Sun – known as the solar elongation angle – was only 17 degrees, and to the camera eye the nearby Sun was about 460 million times brighter than Jupiter. 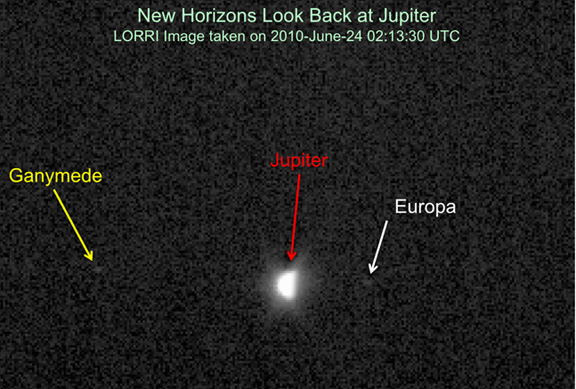 In Tune with Neptune: The New Horizons Long Range Reconnaissance Imager (LORRI) observed Neptune on June 23, as part of a test of the critical optical navigation during the mission’s latest annual checkout (ACO-4). In this 100-millisecond exposure, taken when the spacecraft was 23.2 astronomical units (about 2.15 billion miles) from Neptune, the planet appears slightly larger than a star. At the time of this observation, the solar phase angle (the spacecraft-planet-Sun angle) was 34 degrees and the solar elongation angle (planet-spacecraft -Sun angle) was 95 degrees. Only New Horizons can observe Neptune at such large solar phase angles, which can be used to study the light-scattering properties of Neptune’s atmosphere. Image Credit: NASA/Johns Hopkins University Applied Physics Laboratory/Southwest Research Institute 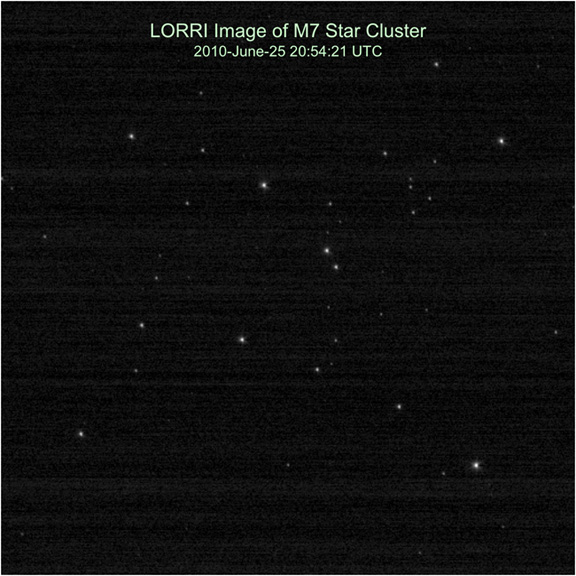 Star Treatment: The New Horizons team calibrates the Long Range Reconnaissance Imager (LORRI) by taking pictures of the open star cluster M7. This is the first LORRI image of M7 taken during Annual Checkout (ACO) 4; the 100- millisecond manual exposure was taken on June 25. A preliminary comparison of this image to a 2008 LORRI picture of M7 indicated no degradation or change in LORRI’s performance. Image Credit: NASA/Johns Hopkins University Applied Physics Laboratory/Southwest Research Institute

Speaking of ACO-4: the mission’s fourth annual checkout, which started on May 25, wraps up this week. “We packed a lot of activity into nine weeks,” says Mission Operations Manager Alice Bowman, of APL. “It was very successful.”

Read about ACO-4. The final activities included making sure the spacecraft’s command and data handling system was in working order, and loading new navigation data into the spacecraft’s guidance and control system, based on the June 30 trajectory-correction maneuver that refined New Horizons’ path to Pluto. The Venetia Burney Student Dust Counter has also been turned on, now that the other six instruments in New Horizons science payload have been shut down. Working from commands transmitted last week to its computers, New Horizons will enter hibernation on Friday (July 30) and remain in electronic slumber until November. Operators at APL will monitor the craft through a weekly status beacon and a monthly transmission of housekeeping data.