Titan, the largest moon of Saturn was discovered by Dutch astronomer Christian Huygens in 1655 and certainly deserves its name. With a diameter of no less than 5,150 km, it is larger than Mercury and twice as large as Pluto. It is unique in having a hazy atmosphere of nitrogen, methane and oily hydrocarbons. Although it was explored in some detail by the NASA Voyager missions, many aspects of the atmosphere and surface still remain unknown. Thus, the existence of seasonal or diurnal phenomena, the presence of clouds, the surface composition and topography are still under debate. There have even been speculations that some kind of primitive life (now possibly extinct) may be found on Titan.

Titan is the main target of the NASA/ESA Cassini/Huygens mission, launched in 1997 and scheduled to arrive at Saturn on July 1, 2004. The ESA Huygens probe is designed to enter the atmosphere of Titan, and to descend by parachute to the surface.

Ground-based observations are essential to optimize the return of this space mission, because they will complement the information gained from space and add confidence to the interpretation of the data. Hence, the advent of the adaptive optics system NAOS-CONICA (NACO) [1] in combination with ESO’s Very Large Telescope (VLT) at the Paranal Observatory in Chile now offers a unique opportunity to study the resolved disc of Titan with high sensitivity and increased spatial resolution. 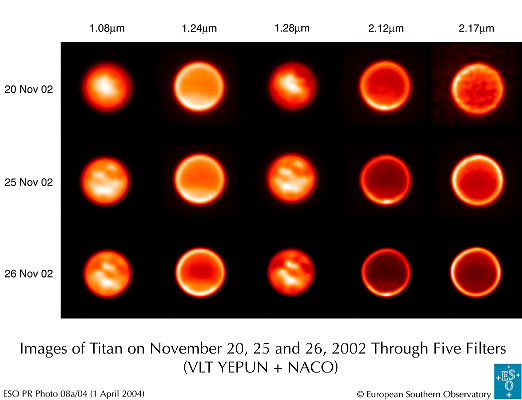 Caption: ESO PR Photo 08a/04 shows
Titan (apparent visual magnitude 8.05, apparent diameter 0.87 arcsec) as observed with the NAOS/CONICA instrument at VLT Yepun (Paranal Observatory, Chile) on November 20, 25 and 26, 2003, between 6.00 UT and 9.00 UT. The median seeing values were 1.1 arcsec and 1.5 arcsec respectively for the 20th and 25th. Deconvoluted (“sharpened”) images of Titan are shown through 5 different narrow-band filters – they allow to probe in some detail structures at different altitudes and on the surface. Depending on the filter, the integration time varies from 10 to 100 seconds. While Titan shows its leading hemisphere (i.e. the one observed when Titan moves towards us) on Nov. 20, the trailing side (i.e the one we see when Titan moves away from us in its course around Saturn) – which displays less bright surface features – is observed on the last two dates. 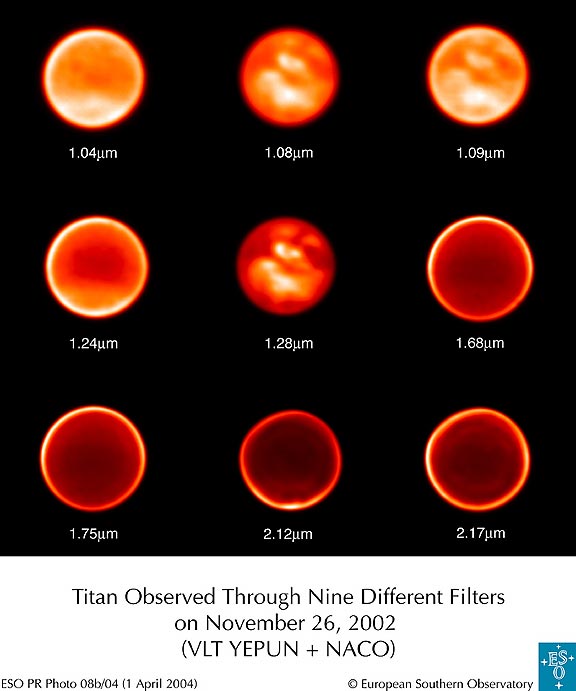 Caption: ESO PR Photo 08b/04:
Images of Titan taken on November 26, 2002 through nine different filters to probe different altitudes, ranging from the stratosphere to the surface. On this night, a stable “seeing” (image quality before adaptive optics correction) of 0.9 arcsec allowed the astronomers to attain the diffraction limit of the telescope (0.032 arcsec resolution). Due to these good observing conditions, Titan’s trailing hemisphere was observed with contrasts of about 40%, allowing the detection of several bright features on this surface region, once thought to be quite dark and featureless. 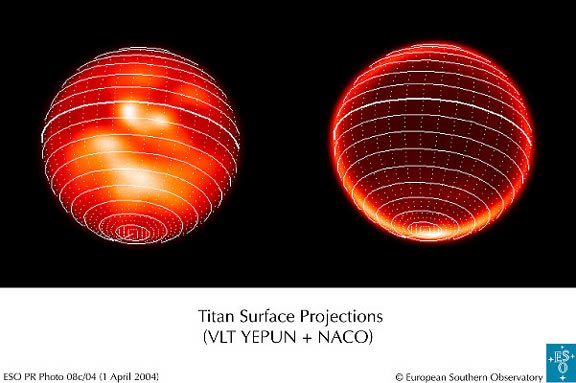 Caption: ESO PR Photo 08c/04 :
Titan images obtained with NACO on November 26th, 2002. Left: Titan’s surface projection on the trailing hemisphere as observed at 1.3 μm, revealing a complex brightness structure thanks to the high image contrast of about 40%. Right: a new, possibly meteorological, phenomenon observed at 2.12 μm in Titan’s atmosphere, in the form of a bright feature revolving around the South Pole.

A team of French astronomers [2] have recently used the NACO state-of-the-art adaptive optics system on the fourth 8.2-m VLT unit telescope, Yepun, to map the surface of Titan by means of near-infrared images and to search for changes in the dense atmosphere.

These extraordinary images have a nominal resolution of 1/30th arcsec and show details of the order of 200 km on the surface of Titan. To provide the best possible views, the raw data from the instrument were subjected to deconvolution (image sharpening).

Images of Titan were obtained through 9 narrow-band filters, sampling near-infrared wavelengths with large variations in methane opacity. This permits sounding of different altitudes ranging from the stratosphere to the surface.

A high-contrast bright feature is observed at the South Pole and is apparently caused by a phenomenon in the atmosphere, at an altitude below 140 km or so. This feature was found to change its location on the images from one side of the south polar axis to the other during the week of observations.

An additional series of NACO observations of Titan is foreseen later this month (April 2004). These will be a great asset in helping optimize the return of the Cassini/Huygens mission. Several of the instruments aboard the spacecraft depend on such ground-based data to better infer the properties of Titan’s surface and lower atmosphere.

Although the astronomers have yet to model and interpret the physical and geophysical phenomena now observed and to produce a full cartography of the surface, this first analysis provides a clear demonstration of the marvellous capabilities of the NACO imaging system. More examples of the exciting science possible with this facility will be found in a series of
five papers published today in the European research journal
Astronomy & Astrophysics (Vol. 47, L1 to L24).

The results presented here are based on an article published in Astronomy & Astrophysics (A&A 417, L21-24, 2004): “VLT/NACO adaptive optics imaging of Titan” by E. Gendron et al.

Images of Saturn taken with NACO can be found in ESO PR Photo 04a/02.

[1] NACO is an abbreviation of NAOS/CONICA. The NAOS adaptive optics corrector was built, under an ESO contract, by Office National d’Etudes et de Recherches Aérospatiales (ONERA), Laboratoire d’Astrophysique de Grenoble (LAOG) and the LESIA and GEPI laboratories of the Observatoire de Paris in France, in collaboration with ESO. The CONICA infra-red camera was built, under an ESO contract, by the Max-Planck-Institut für Astronomie (MPIA) (Heidelberg) and the Max-Planck Institut für Extraterrestrische Physik (MPE) (Garching) in Germany, in collaboration with ESO.