By SpaceRef Editor
February 8, 2013
Filed under Citizens in Space, US 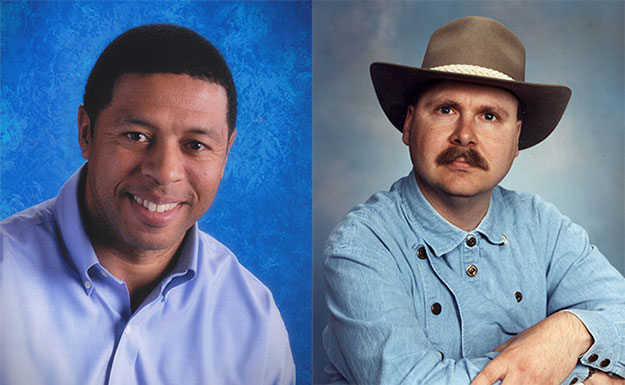 Citizen-astronaut candidate Maureen Adams , who has been in training for three years, announced the new additions.

“As a citizen of Texas, I take special pride in making this announcement,” Adams said. “Today we are expanding our astronaut corps to four, as Michael Johnson and Edward Wright , both from Texas, join our training program.”

Michael Johnson is a founding member and executive director of the North American Aerotech Academy, a non-profit organization that provides aviation-based STEM education to schools in the Dallas-Fort Worth area, including four-year aviation academies at Irving High School and DeSoto High School . Johnson is a single- and multi-engine commercial pilot, instrument ground instructor, and type-rated captain on the Cessna Citation jet aircraft.

Johnson also provides STEM-based afterschool programs and summer camps, most recently teaching the Hot Roc STEM camp at Cedar Valley College in Lancaster, Texas that included an on-site mission-control room and the construction and launch of over 300 rockets. He is currently pursuing an Executive MBA degree at the University of Texas at Dallas and serves in the Texas Wing of the Civil Air Patrol as an Aerospace Officer with the rank of 2nd Lieutenant.

Edward Wright is the chairman of the United States Rocket Academy and project manager for Citizens in Space. He brings almost 30 years of experience in the computer, aviation, and space industries. In the past, he developed the first Space Enterprise Symposium and founded X-Rocket, LLC.

“This is an important step in the development of our program,” said Lt. Col. Steve Heck (USAF-ret.), training director for Citizens in Space and another citizen-astronaut candidate. “Citizens in Space has purchased 10 flights on the XCOR Lynx spaceplane, which is expected to enter operational service in 2014. We will be flying over 100 citizen-science experiments and training 10 citizen astronauts to fly as payload operators.
“The individuals named today provide the right mix of skills to help us develop our training program, which will ensure that our current and future astronauts are able to fly safely and perform effectively as payload operators.

“As a veteran military aviator and future astronaut, I am well aware of the risks involved in this sort of undertaking and the tragedies that can occur when things go wrong. The United States Rocket Academy is dedicated to providing the highest standard of training to minimize those risks.”

“Spaceflight is an inherently risky activity,” Wright said. “Safety is an ethical matter. I have seen too many friends die in aircraft accidents. I did not feel that I could ask people to participate in this program and accept the risks unless I was willing to do so myself.”

“Citizen astronauts will fly as payload operators, not just space tourists,” Johnson said. “This means that a higher standard of training is necessary.”

Adams, Heck, Johnson, and Wright are pathfinders for a larger training program. The “first four” will participate in training activities at several locations this summer. Training will expand next year as Citizens in Space seeks to fill out all ten astronaut slots.

Photographs of Michael Johnson and Edward Wright are available at:
http://www.citizensinspace.org/2013/02/new-citizen-astronaut-candidates-announced