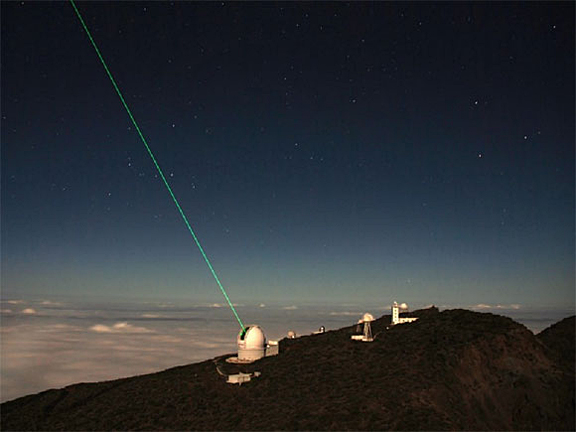 Adaptive optics allows one to observe the sky without suffering perturbations from atmospheric turbulence. Now, a French-British team has demonstrated a major improvement of this technology, opening the study of very faint sources in a very large field of view. It was done with the CANARY demonstrator installed at the William Herschel 4.2m telescope on La Palma, Canary Islands, Spain. The analysis of the first results obtained in September 2010 shows that the system performs very well. This test validates the feasibility of the EAGLE instrument, dedicated to the characterization of 20 galaxies of the early universe at a time, distributed within a 5 arcminute diameter field of view (1/6 the apparent width of the full Moon), on the future 42 meter European Extremely Large Telescope of the European Southern Observatory (ESO) to be installed in the Atacama desert, Chile.

The question of how the universe evolved from the Big Bang into its highly structured state of stars, galaxies, and clusters of galaxies is a key question for modern cosmology. If we could look back to the early epoch when the first stars started to emit light, we could observe the formation of the very first galaxies.

In order to make such observations, one of the key tools will be an optical telescope of unprecedented size. The largest telescope planned is the European Extremely Large Telescope, 42 meters in diameter. Such a telescope must be ground-based, and its imaging qualities should approach those of a space telescope. This means overcoming the effects of looking through the inevitable atmospheric turbulence above the telescope. The technology to do this has been under development for the last 20 years or so and is called adaptive optics. It uses special deformable mirrors that can adapt themselves to cancel the changing atmospheric distortions of the light waves many hundreds of times per second.

Hitherto, adaptive optics has only operated over fairly limited fields of view. To survey the early universe efficiently, however, larger areas of sky must be corrected all at once. This is the role of the EAGLE instrument, designed in France and the United Kingdom. It will be able to look in detail at 20 target galaxies at a time, each one of which will be separately corrected for atmospheric distortion.

However, the first galaxies are too faint to allow us to measure the atmospheric distortions using their own light as a reference. It is therefore required to find a number of guide stars bright enough for this purpose in the field of view. It is also envisioned to generate artificial laser guide stars. Moreover, using only one deformable mirror for compensating for the whole field of view, as is done in conventional adaptive optics, is not feasible. Because of the very small size of the first galaxies, it is instead only required to compensate for turbulence in a few small image zones distributed throughout the whole field of view. The new technology, called Multi-Object Adaptive Optics (MOAO), implements one deformable mirror per target in a dedicated optical train. All deformable mirrors are being controlled, from all the measurements performed on all the guide stars, through a global tomography approach to measuring the atmosphere. This new technique was demonstrated on-sky for the first time in September 2010 by the EAGLE team at the William Herschel 4.2m telescope on La Palma in the Canary Islands, Spain.

The William Herschel Telescope is exactly 1/10 the diameter of the future European Extremely Large Telescope. The first observations made with CANARY were a spectacular success. The new technology operated at the hoped-for performance level the first time it was used.

Photo 1 shows the image of a test star with the correction system switched off and then with it on. The achieved performance is very similar to that obtained by conventional adaptive optics under the same conditions. Corrections were applied 150 times every second using information gathered from three other off-axis stars. This information was used to infer the corrections required to sharpen the view in the direction of the test star. This crucial tomography of the atmosphere above the telescope and the deformable mirror control are the novel achievements of CANARY.

The next step will be to repeat this experiment but using artificial guide stars generated in the atmosphere using powerful lasers. This technique has been used elsewhere, but never to perform the tomographic measurements required by CANARY. The use of laser stars is essential for EAGLE today and for the E-ELT in the future.

Images recorded in the near infrared (1.65 microns) by CANARY. Right, without any correction. Left, with correction recovering the telescope’s diffraction limit.

Professor Gerard Rousset of LESIA and Dr. Richard Myers of Durham
University are co-leaders of the CANARY Project. The team also
acknowledges contributions from Engineering and Project Solutions Ltd.
and the staff of the Isaac Newton Group of telescopes, who operates
the William Herschel Telescope.