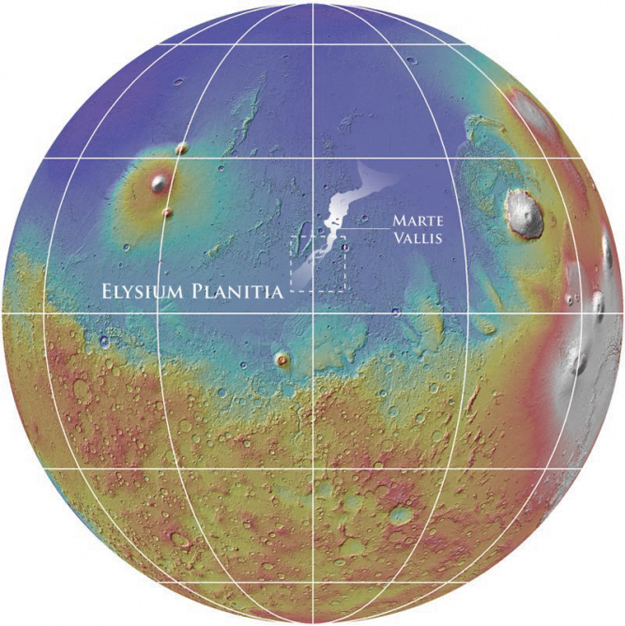 The location of the ~ 1000 km Marte Vallis channel system on Mars. Marte Vallis is filled with young lavas obscuring the source and morphology of the channels. The dashed box highlights the area shown in Fig. 2. The background shows the global topography of Mars (MOLA colorized elevation above a MOLA hillshade image).

New maps of the subsurface of Mars show for the first time buried channels below the surface of the red planet. Mars is considered to have been cold and dry over the past 2.5 billion years, but these channels suggest evidence of flooding. Understanding the source and scale of the young channels present in Elysium Planitia–an expanse of plains along the equator, and the youngest volcanic region on the planet–is essential to comprehend recent Martian hydrologic activity and determine if such floods could have induced climate change.

Image: Smithsonian/NASA/JPL-Caltech/Sapienza University of Rome, Example of SHARAD data used in the study. SHARAD data is presented as radargrams which depict the delay time of the return signal against distance along the martian surface. From this we can identify the surface and subsurface structure. Throughout eastern Elysium Planitia two parallel subsurface reflectors are present (L1R and L2R) which we interpret to be boundaries between extensive geologic layers. The formation of Marte Vallis cut channels through these boundaries. Thus from identifying where the reflectors are absent, we were able to map out the shape and scale of the Marte Vallis channels. Image Number: WEB12780-2013

The findings are reported by a team from NASA’s Goddard Space Flight Center, the Jet Propulsion Laboratory, the Planetary Science Directorate in the Southwest Research Institute and the Smithsonian Institution, led by Smithsonian scientist Gareth A. Morgan, in a paper, “3D Reconstruction of the Source and Scale of Buried Young Flood Channels on Mars” scheduled for publication in the March 7 issue of the journal Science.

As a consequence of extensive volcanism throughout the past several hundred million years, young lava covers most of the surface of Elysium Planitia, burying evidence of its recent geologic history, including the source and most of the length of the 1,000 kilometer-long Marte Vallis channel system. Marte Vallis has a similar morphology to more ancient channel systems on Mars that likely formed by the catastrophic release of ground water; however, little is known about Marte Vallis due to its burial by lava. The team used data from the Shallow Radar on board the NASA Mars Reconnaissance Orbiter spacecraft to probe the subsurface of Elysium Planitia. They were able to map the buried channels and establish that the floods originated from a now buried portion of the Cerberus Fossae fracture system. 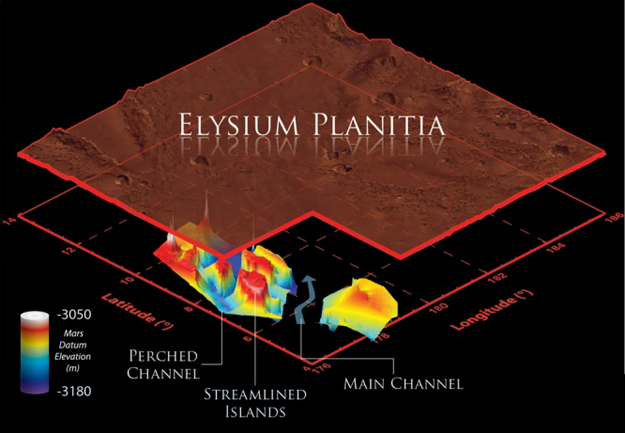 Image: Smithsonian/NASA/JPL-Caltech/Sapienza University of Rome/MOLA Team/USGS, 3D visualization of the buried Marte Vallis channels beneath the martian surface. Marte Vallis consists of multiple perched channels formed around streamlined islands. These channels feed a deeper and wider main channel. Please note the surface has been elevated, and scaled by a factor of 1/100 for clarity. The color scale represents the elevation of the buried channels relative to a martian datum (Note: the reason the values are negative is because the elevation of the surface of Mars in this region is also a negative – below average global elevation).

“Our findings show that the scale of erosion was previously underestimated and that channel depth was at least twice that of previous approximations,” said Morgan, geologist at the National Air and Space Museum’s Center for Earth and Planetary Studies and lead author on the paper. “The source of the floodwaters suggests they originated from a deep groundwater reservoir and may have been released by local tectonic or volcanic activity. This work demonstrates the importance of orbital sounding radar in understanding how water has shaped the surface of Mars.”

SHARAD was provided by the Italian Space Agency. Its operations are led by Sapienza University of Rome, and its data are analyzed by a joint U.S.-Italian science team. NASA’s Jet Propulsion Laboratory, a division of the California Institute of Technology in Pasadena, manages the Mars Reconnaissance Orbiter for the NASA Science Mission Directorate in Washington. Lockheed Martin Space Systems in Denver built the spacecraft.

The National Air and Space Museum is on the National Mall in Washington, D.C., at Sixth Street and Independence Avenue S.W. The museum’s Steven F. Udvar-Hazy Center is located in Chantilly, Va., near Washington Dulles International Airport.