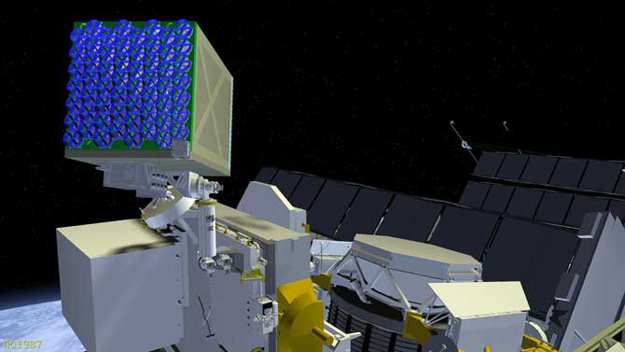 The Neutron-star Interior Composition Explorer (NICER), which NASA recently selected as its next Explorer Mission of Opportunity, will gather scientific data revealing the physics of the densest matter allowed in nature, and–from the same platform–will demonstrate a groundbreaking navigation technology that could revolutionize the agency’s ability to travel to the far reaches of the solar system and beyond.

The multi-purpose mission, also known as NICER/SEXTANT (Station Explorer for X-ray Timing and Navigation Technology), consists of 56 X-ray telescopes in a compact bundle, their associated silicon detectors, and a number of other advanced technologies.

The X-ray instrument is roughly the size of a typical college dormitory refrigerator and will be deployed on the International Space Station (ISS) in 2017 as an external attached payload on one of the ISS ExPRESS Logistics Carriers. Both NASA’s Science Mission Directorate’s Explorers Program and the Space Technology Mission Directorate’s Game Changing Development Program are contributing to the mission’s development.

“NICER/SEXTANT represents the quintessential cross-cutting mission,” said Principal Investigator Keith Gendreau, a scientist at NASA’s Goddard Space Flight Center in Greenbelt, Md., who is leading NICER/SEXTANT’s development. “Our technology demonstration will establish the viability of spacecraft navigation using neutron stars, while the same instrument gives scientists an important new tool with which to better understand these stars that can serve as navigation beacons.”

In addition to NASA Goddard scientists and engineers, the mission team includes the Massachusetts Institute of Technology and commercial partners, who are providing spaceflight hardware. The Naval Research Laboratory and universities across the United States, as well as in Canada and Mexico, are providing science expertise. The Japanese HII-B Transfer Vehicle (HTV) or the Dragon, a carrier now being developed by Space Exploration Technologies Corp. (SpaceX), of Hawthorne, Calif., is expected to deliver the payload to the Station, Gendreau said.

NICER/SEXTANT’s primary objective is to learn more about the interior composition of neutron stars, the remnants of massive stars that, after exhausting their nuclear fuel, exploded and collapsed into super-dense spheres about the size of New York City. Their intense gravity crushes an astonishing amount of matter — often more than 1.4 times the content of the sun or at least 460,000 Earths — into these city-sized balls, creating the densest objects known in the universe. Just one teaspoonful of neutron-star matter would weigh a billion tons on Earth.

“We have no way of creating or studying this extraordinary material in any laboratory,” said Zaven Arzoumanian, a Goddard scientist serving as the deputy principal investigator on the mission. “There are many theories about what it is and how it behaves, but the only way to test our models and understand what happens to matter under such incredible pressures is to study neutron stars. NICER/SEXTANT will reveal the nature of ultra-dense matter in these stars and the physics that governs it.”

Although the nuclear-fusion fires that sustained their parent stars are extinguished, neutron stars still shine with heat left over from their explosive formation, and from radiation generated by their magnetic fields that became intensely concentrated as the core collapsed.

Neutron stars emit radiation across the spectrum, but observing in the X-ray band offers the greatest insights into their structure, the ultimate stability of their pulses as precise clock “ticks,” and the high-energy, dynamic phenomena that they host, including starquakes, thermonuclear explosions, and the most powerful magnetic fields known in the universe.

NICER’s array of 56 telescopes will collect X-rays generated both from hotspots on a neutron star’s surface and from its tremendously strong magnetic field. There are two hotspots on a neutron star, one at each magnetic pole, where the star’s intense magnetic field emerges from the surface. Here, particles trapped in the magnetic field rain down and generate X-rays when they strike the surface. As a hotspot spins through our line of sight, we perceive a rise and fall in X-ray brightness. This subgroup of neutron stars rotates rapidly, emitting from their magnetic poles powerful beams of light that sweep around as the star spins, much like a lighthouse. At Earth, these beams are seen as flashes of light, pulsing on and off at intervals from seconds down to milliseconds, giving rise to the stars’ alternate name, pulsars.

Because of their predictable pulsations–especially millisecond pulsars, which are the mission’s prime target and are found to spin as much as 700 times per second–“they are extremely reliable celestial clocks” and can provide high-precision timing just like the atomic clock signals supplied through the 26-satellite, military-operated Global Positioning System (GPS), an Earth-centric service that weakens the farther one travels out beyond Earth orbit and into the solar system, Arzoumanian said.

As a result, NICER/SEXTANT also will demonstrate the viability of pulsar-based navigation. “The hardware needed for neutron star science is identical to that needed for pulsar-based navigation,” Gendreau said. “In fact, the mission’s two goals share many of the same targets and the same operational concept. The differences are on the back end in terms of how the data will be used.” To demonstrate the navigation technology’s viability, the NICER/SEXTANT payload will use its telescopes to detect X-ray photons within these powerful beams of light to estimate the arrival times of their pulses. With these measurements, the system will use specially developed algorithms to stitch together an on-board navigation solution.

“We’re excited about NICER/SEXTANT’s possibilities,” Gendreau added. “The experiment meets critical science objectives and is a stepping-stone for technology applications that meet a variety of NASA needs. It’s rare that you get an opportunity to do a cross-cutting experiment like this.”