NASA’s Webb Telescope Gets Its Wings 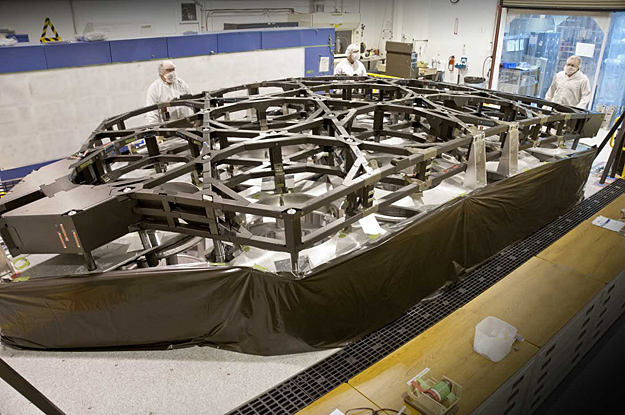 A massive backplane that will hold the primary mirror of NASA’s James Webb Space Telescope nearly motionless while it peers into space is another step closer to completion with the recent assembly of the support structure’s wings.

The wings enable the mirror, made of 18 pieces of beryllium, to fold up and fit inside a 16.4-foot (5-meter) fairing on a rocket, and then unfold to 21 feet in diameter after the telescope is delivered to space. All that is left to build is the support fixture that will house an integrated science instrument module, and technicians will connect the wings and the backplane’s center section to the rest of the observatory. The center section was completed in April 2012.

Designed, built and set to be tested by ATK at its facilities in Magna, Utah, the wing assemblies are extremely complex, with 900 separate parts made of lightweight graphite composite materials using advanced fabrication techniques. ATK assembled the wing assemblies like a puzzle with absolute precision. ATK and teammate Northrop Grumman of Redondo Beach, Calif., completed the fabrication.

“We will measure the accuracy down to nanometers — it will be an incredible engineering and manufacturing challenge,” said Bob Hellekson, ATK’s Webb Telescope program manager. “With all the new technologies that have been developed during this program, the Webb telescope has helped advance a whole new generation of highly skilled ATK engineers, scientists and craftsmen while helping the team create a revolutionary telescope.”

When fully assembled, the primary mirror backplane support structure will measure about 24 feet by 21 feet and weigh more than 2,000 pounds. The backplane must be very stable, both structurally and thermally, so it does not introduce changes in the primary mirror shape, and holds the instruments in a precise position with respect to the telescope. While the telescope is operating at a range of extremely cold temperatures, from minus 406 to minus 360 degrees Fahrenheit, the backplane must not vary more than 38 nanometers (about one one-thousandth the diameter of a human hair). The thermal stability requirements for the backplane are unprecedented.

“Our ATK teammates demonstrated the thermal stability on test articles before building the wing assemblies with the same design, analysis, and manufacturing techniques. One of the test articles ATK built and tested is actually larger than a wing,” said Charlie Atkinson, deputy Webb Optical Telescope Element manager for Northrop Grumman in Redondo Beach, Calif. “The mirrors are attached to the wings, as well as the rest of the backplane support structure, so the alignment is critical. If the wings distort, then the mirror distorts, and the images formed by the telescope would be distorted.”

The James Webb Space Telescope is the successor to NASA’s Hubble Space Telescope. It will be the most powerful space telescope ever built and observe the most distant objects in the universe, provide images of the first galaxies formed and see unexplored planets around distant stars. The Webb telescope is a joint project of NASA, the European Space Agency and the Canadian Space Agency.

For the news release on the completion of the center section of the backplane, visit: http://go.nasa.gov/Zuggpq

For a “Behind the Webb” series video about the backplane, visit: http://go.nasa.gov/Zugltr