Gusev is halfway around the planet from the Meridiani region where
Spirit’s twin, Opportunity, recently found evidence that water used to
flow across the surface.

“This is not water that sloshed around on the surface like what
appears to have happened at Meridiani. We’re talking about small
amounts of water, perhaps underground,” said Dr. Hap McSween, a rover
science team member from the University of Tennessee, Knoxville.

“The evidence is in the form of multiple coatings on the rock, as well
as fractures that are filled with alteration material and perhaps
little patches of alteration material,” McSween said during a press
conference at NASA’s Jet Propulsion Laboratory, Pasadena, Calif.

The rock, called “Mazatzal” after mountains in Arizona, lies partially
buried near the rim of the crater informally named “Bonneville” inside
the much larger Gusev Crater. Its light- toned appearance grabbed
scientists’ attention. After Spirit’s rock abrasion tool brushed two
patches on the surface with wire bristles, a gray, darker layer could
be seen under the tan topcoat. The rock abrasion tool ground into the
surface with diamond cutting teeth on March 26. Then, after an
examination of the newly exposed material, it ground deeper into the
rock two days later. A lighter-gray interior lies under the darker
layer, and a bright stripe cuts across both. 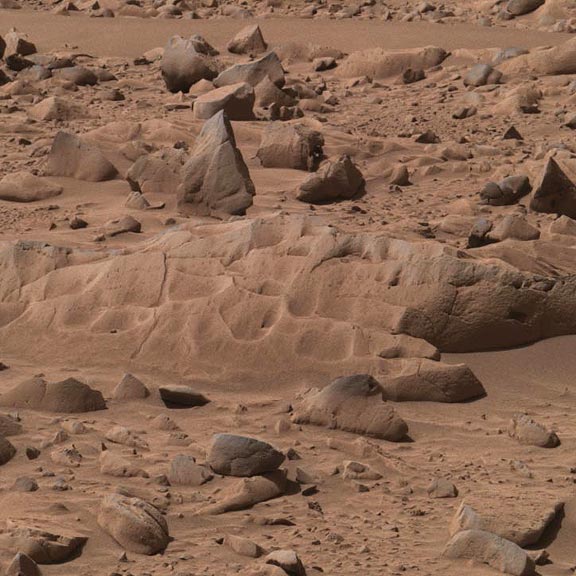 This approximate true-color image taken by the panoramic camera on the Mars Exploration Rover Spirit shows the rock dubbed “Mazatzal” before the rover drilled into it with its rock abrasion tool. On sol 82, Spirit ground into a circular patch of the rock called “New York,” then repeated this operation on sol 85 to complete the hole. Several observations were made during this grinding process with the rover’s suite of scientific instruments. Preliminary results suggest that fluid may have been present during Mazatzal’s formation. Images from the panoramic camera’s blue, green and red filters (480, 530 and 600-nanometer filters) were combined to make this picture.

Dr. Jeff Johnson, a science team member from the U.S. Geological
Survey’s Astrogeology Team, Flagstaff, Ariz., said the stripe “seems
to be a fracture that water has flowed through, potentially with
minerals precipitating from that fluid and lining the walls of the
crack.”

He and other scientists stressed that the interpretations are
preliminary. “The team is, as always, trying to find time to digest
these observations while also preparing for the next day’s
operations,” Johnson said.

Spirit’s alpha particle X-ray spectrometer checked what chemical
elements were close to the surface of untreated, brushed, once-drilled
and twice-drilled patches. “Miracles, miracles, miracles. We have a
lot of work to do,” the instrument’s lead scientist, Dr. Rudi Rieder
of the Max Planck Institute, Mainz, Germany, exclaimed about the
results. For example, the ratio of bromine to chlorine seen inside
the rock is unusually high and possibly a clue to alteration by water.

The final experiment on Mazatzal was to scrub the surface with the
rock abrasion tool in a pattern of five circles arranged in a ring,
with a sixth circle in the center. Besides creating a rock-art daisy,
this task by the engineers of New York-based Honeybee Robotics, as
well as JPL, produced a brushed patch big enough to fill the field of
view of Spirit’s miniature thermal emission spectrometer, said Dr.
Steve Ruff of Arizona State University, Tempe. The tan outer surface
appears to have a strikingly different mineral composition than the
dark gray coating exposed by the brushing, but more time is needed to
complete the analysis, he said.

McSween proposed that the light outer coat, dark inner coat and bright
veins could have resulted from three different periods of the rock
being buried, altered by fluids and unburied.

While scientists await transmission of additional data Spirit has
collected about Mazatzal, the rover will be making its way toward the
“Columbia Hills” about 2.3 kilometers (1.3 miles) away. Spirit left
the rock and drove 36.5 meters (120 feet) early Thursday.

Before moving on across the plains of Meridiani, though, Opportunity
will complete an investigation it has begun of Bounce Rock. The rock
is unlike any seen on Mars before, said Dr. Jim Bell, lead scientist
for the rovers’ panoramic cameras. “There are some shiny surfaces on
this rock,” he said, describing them as “almost mirrorlike.”

The two rovers’ 18 cameras have now taken more than 20,000 images.
JPL, a division of the California Institute of Technology in Pasadena,
manages the Mars Exploration Rover project for NASA’s Office of Space
Science, Washington, D.C. Images and additional information about the
project are available from JPL at http://jpl.nasa.gov