A critical series of ground tests are scheduled to begin this week at NASA’s Kennedy Space Center to confirm that Ares I-X, the precursor to NASA’s next generation launch vehicle, will behave as predicted as it lifts off the pad and powers through the initial stage of flight in a demonstration flight later this year.

Computer analytical models developed by the agency have predicted how the Ares I-X will behave when launched. The upcoming ground tests will validate those vehicle models that were used to derive the flight control parameters by comparing test data with the predicted vehicle flight behavior.

Called “modal survey testing,” the tests include two partial stack tests and a test of the full Ares I-X vehicle on the Mobile Launch Platform that are located in Kennedy’s Vehicle Assembly Building. The first partial stack test will involve only the top part of the vehicle that includes the launch abort tower, crew module, service module and spacecraft adaptor. The second partial stack test is composed of the interstage, frustum and simulated fifth segment of the first stage of the rocket. 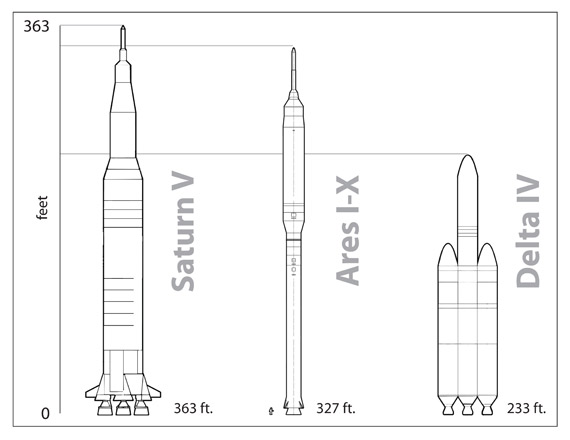 Strategically located sensors throughout the stacks will measure the amount, acceleration, and direction of movement, as shakers impose random loads/vibrations to determine the flight test vehicle’s first several bending modes.

The flight test, estimated to last less than three minutes, gives NASA an early opportunity to test and prove hardware, facilities and ground operations that will be needed for the Ares I crew launch vehicle, under development to carry astronauts to the International Space Station by 2015 and to the moon by 2020.

May 26, 2009″The actual Ares I-X launch vehicle will be tested to make sure our structural models match what actually happens to the vehicle,” said Paul Bartolotta, Ares I-X Modal Test Lead. 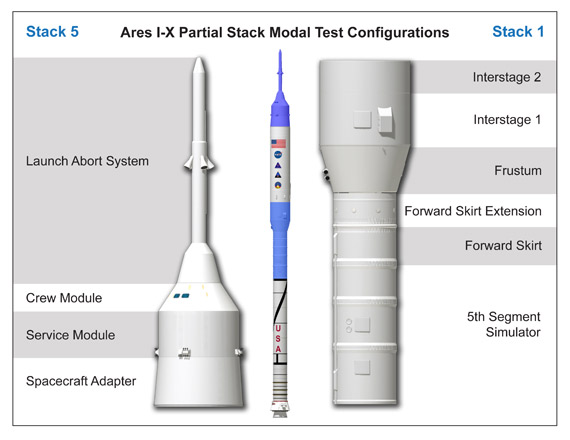 The “modal tests” include two partial stack tests and a test of the full Ares I-X vehicle on the Mobile Launch Platform, all in Kennedy’s Vertical Assembly Building. At left, the first partial stack test will involve only the top part of the vehicle and includes the launch abort tower, crew module, service module and spacecraft adaptor. At right, the second partial stack test consists of the vehicle’s interstage, frustum and simulated fifth segment of the first stage of the rocket. The center diagram illustrates the full vehicle (not to scale). The grayed areas represent Stack 5, at top, and Stack 1, midway, on the vehicle. Image Credit: NASA

Kurt Detweiler, Ares I-X Lead Systems Engineer, based at Langley, adds, “If the vehicle dynamics do not match the analytical models, its guidance, navigation and control systems will need to be modified. So it’s important that the computer models are accurately correlated with the vehicle dynamics to predict how Ares I-X will respond during flight.”

Ares I-X launch is now scheduled for no earlier than August 30.