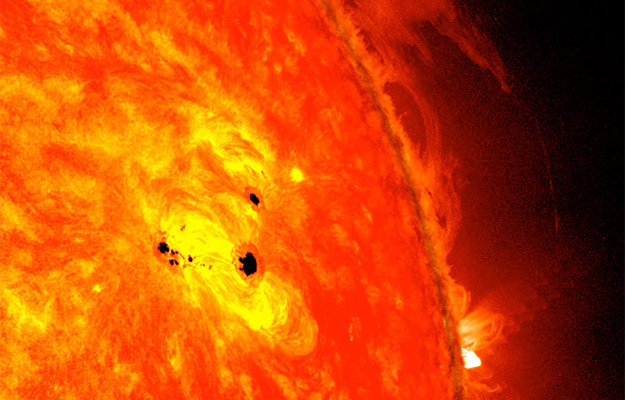 The bottom two black spots on the sun, known as sunspots, appeared quickly over the course of Feb. 19-20, 2013. These two sunspots are part of the same system and are over six Earths across. This image combines images from two instruments on NASA’s Solar Dynamics Observatory (SDO): the Helioseismic and Magnetic Imager (HMI), which takes pictures in visible light that show sunspots and the Advanced Imaging Assembly (AIA), which took an image in the 304 Angstrom wavelength showing the lower atmosphere of the sun, which is colorized in red. Credit: NASA/SDO/AIA/HMI/Goddard Space Flight Center

As magnetic fields on the sun rearrange and realign, dark spots known as sunspots can appear on its surface. Over the course of Feb. 19-20, 2013, scientists watched a giant sunspot form in under 48 hours. It has grown to over six Earth diameters across but its full extent is hard to judge since the spot lies on a sphere not a flat disk.

The spot quickly evolved into what’s called a delta region, in which the lighter areas around the sunspot, the penumbra, exhibit magnetic fields that point in the opposite direction of those fields in the center, dark area. This is a fairly unstable configuration that scientists know can lead to eruptions of radiation on the sun called solar flares.