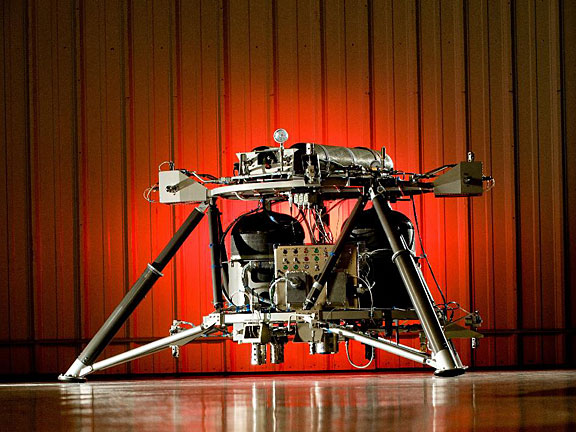 The lander prototype was placed on modified skateboards and a customized track system as a low-cost solution to control movement during final testing of the prototype’s sensors, onboard computer, and thrusters. The functional test focused on ensuring that all system components work seamlessly to sense, communicate, and command the lander’s movements.

The prototype will be transported to the United States Army Redstone Arsenal Test Center in Huntsville this week to begin strap-down testing, which will lead to free-flying tests later this year.

The lander prototype will aid NASA’s development of a new generation of small, smart, versatile landers for airless bodies such as the moon and asteroids. The lander’s design is based on cutting-edge technology, which allows precision landing in high-risk, but high-priority areas, enabling NASA to achieve scientific and exploration goals in previously unexplored locations.

Development of the lander prototype is a cooperative endeavor led by the Robotic Lunar Lander Development Project at the Marshall Center, Johns Hopkins Applied Physics Laboratory of Laurel, Md., and the Von Braun Center for Science and Innovation, which includes the Science Applications International Corporation, Dynetics Corp., Teledyne Brown Engineering Inc., and Millennium Engineering and Integration Company, all of Huntsville.