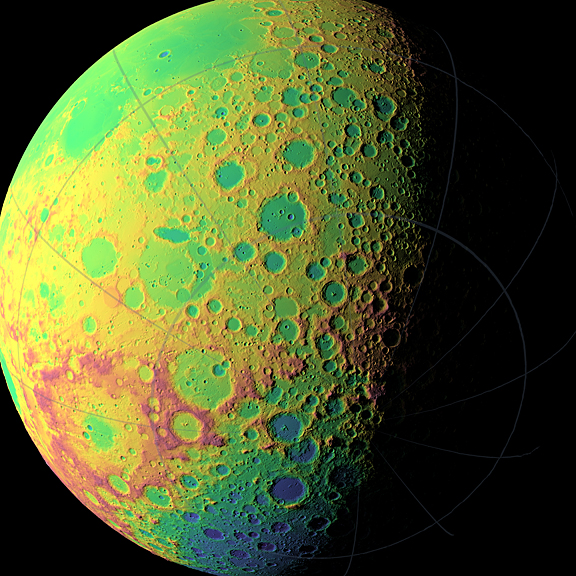 NASA’s Lunar Reconnaissance Orbiter is allowing researchers to create the most precise and complete map to date of the moon’s complex, heavily cratered landscape.

“This dataset is being used to make digital elevation and terrain maps that will be a fundamental reference for future scientific and human exploration missions to the moon,” said Dr. Gregory Neumann of NASA’s Goddard Space Flight Center in Greenbelt, Md. “After about one year taking data, we already have nearly 3 billion data points from the Lunar Orbiter Laser Altimeter on board the LRO spacecraft, with near-uniform longitudinal coverage. We expect to continue to make measurements at this rate through the next two years of the science phase of the mission and beyond. Near the poles, we expect to provide near-GPS-like navigational capability as coverage is denser due to the spacecraft’s polar orbit.” Neumann will present the map at the American Geophysical Union meeting in San Francisco December 17.

The Lunar Orbiter Laser Altimeter (LOLA) works by propagating a single laser pulse through a Diffractive Optical Element that splits it into five beams. These beams then strike and are backscattered from the lunar surface. From the return pulse, the LOLA electronics determines the time of flight which, accounting for the speed of light, provides a precise measurement of the range from the spacecraft to the lunar surface. Range measurements, combined with accurate tracking of the spacecraft’s location, are used to build a map revealing the contours of the lunar landscape. The five beams create a two-dimensional spot pattern that unambiguously reveals slopes. LOLA will also measure the spreading of the return pulse to get the surface roughness and the change in the transmitted compared to the return energy of the pulse to determine surface reflectance.

The new LOLA maps are more accurate and sample more places on the lunar surface than any available before. “The positional errors of image mosaics of the lunar far side, where direct spacecraft tracking – the most accurate — is unavailable, have been one to ten kilometers (about 0.62 to 6.2 miles),” said Neumann. “We’re beating these down to the level of 30 meters (almost 100 feet) or less spatially and one meter (almost 3.3 feet) vertically. At the poles, where illumination rarely provides more than a glimpse of the topography below the crater peaks, we found systematic horizontal errors of hundreds of meters (hundreds of yards) as well.” In terms of coverage, the nearly three billion range measurements so far by LRO compare to about eight million to nine million each from three recent international lunar missions, according to Neumann. “They were limited to a mile or so between individual data points, whereas our measurements are spaced about 57 meters (about 187 feet) apart in five adjacent tracks separated by about 15 meters (almost 50 feet).”

“Recent papers have clarified some aspects of lunar processes based solely on the more precise topography provided by the new LOLA maps,” adds Neumann, “such as lunar crater density and resurfacing by impacts, or the formation of multi-ring basins.”

“The LOLA data also allow us to define the current and historical illumination environment on the moon,” said Neumann. Lunar illumination history is important for discovering areas that have been shaded for long periods. Such places, typically in deep craters near the lunar poles, act like cold storage, and are capable of accumulating and preserving volatile material like water ice.

The landscape in polar craters is mysterious because their depths are often in shadow. The new LOLA dataset is illuminating details of their topography for the first time. “Until LRO and the recent Japanese Kaguya mission, we had no idea of what the extremes of polar crater slopes were,” said Neumann. “Now, we find slopes of 36 degrees over several kilometers (several thousands of yards) in Shackleton crater, for example, which would make traverses quite difficult and apparently causes landslides. The LOLA measurements of shadowed polar crater slopes and their surface roughness take place at scales from lander size to kilometers. These measurements are helping the LRO science team model the thermal environment of these craters, and team members are developing temperature maps of them.”

LRO and LOLA were built and are managed by NASA Goddard. The research was funded by NASA’s Exploration Systems Mission Directorate at NASA Headquarters in Washington.

For images, refer to: http://www.nasa.gov/mission_pages/LRO/news/lola-topo-map.html