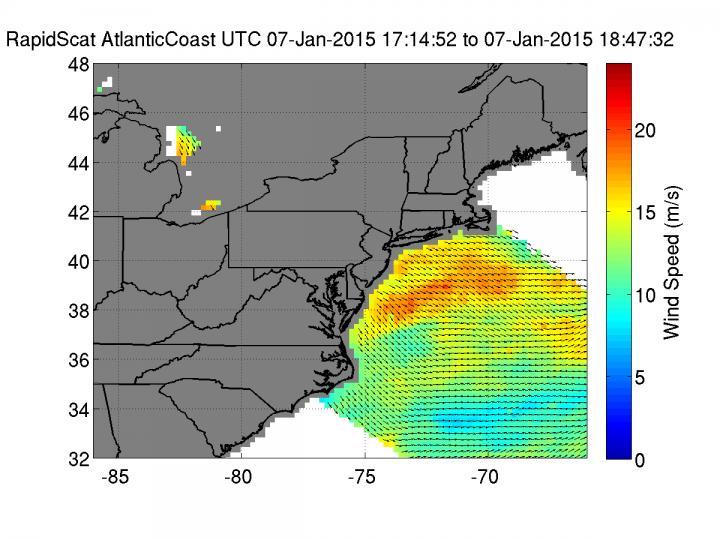 The strong cold front that ushered in frigid Arctic air to two-thirds of the eastern U.S. brought in strong winds and bitter wind chills. NASA’s ISS-RapidScat instrument measured those winds off the coastal Atlantic.

Residents along the northeastern and Mid-Atlantic coast of the U.S. started experiencing bitter wind chills on January 7, 2015 as ISS-RapidScat measured coastal winds from its perch aboard the International Space Station or ISS. Those wind chills continued on January 8.

On Thursday, January 8, 2015, NOAA’s National Weather Service Weather Prediction Center in College Park, Maryland noted that air temperatures will be 20 to 25 degrees below average from the Tennessee Valley to the Mid-Atlantic. Wind chill values will be near zero in Portland, Maine, Boston, Massachusetts, and New York City during the day and night of January 8. As far south as Norfolk, Virginia, wind chills will be in the teens during the day and at night.

The National Weather Service defines wind chill as the term used to describe the rate of heat loss on the body (humans and animals) resulting from the combined effect of low temperature and wind. As winds increase, heat is carried away from the body at a faster rate, driving down both the skin temperature and eventually the internal body temperature. For the NWS wind chill chart, visit: http://www.nws.noaa.gov/om/winter/windchill.shtml. For information on frostbite, visit: http://www.nws.noaa.gov/om/winter/cold.shtml.