Beyond the orbit of Neptune reside countless icy rocks known as trans-Neptunian objects (TNOs). One of the biggest, Pluto, is classified as a dwarf planet. The region also supplies us with comets such as famous Comet Halley. Most TNOs are small and receive little sunlight, making them faint and difficult to spot.

Now, astronomers using clever techniques to cull the data archives of NASA’s Hubble Space Telescope have added 14 new TNOs to the catalog. Their method promises to turn up hundreds more.

“Trans-Neptunian objects interest us because they are building blocks left over from the formation of the solar system,” explained lead author Cesar Fuentes, formerly with the Harvard-Smithsonian Center for Astrophysics and now at Northern Arizona University.

As TNOs slowly orbit the Sun, they move against the starry background, appearing as streaks of light in time exposure photographs. The team developed software to analyze hundreds of Hubble images hunting for such streaks. After promising candidates were flagged, the images were visually examined to confirm or refute each discovery. 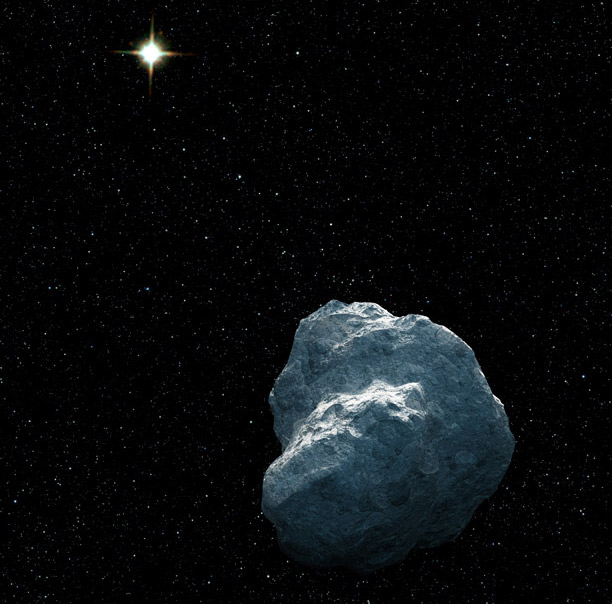 This is an artist’s concept of a craggy piece of Solar System debris that belongs to a class of bodies called trans-Neptunian objects (TNOs). Astronomers culling the data archives of NASA’s Hubble Space Telescope have added 14 new TNOs to the catalog. The newfound TNOs range from 25 to 60 miles (40-100 km) across. Their method promises to turn up hundreds more. In this illustration, the distant Sun is reduced to a bright star at a distance of over 3 billion miles.
Credit: NASA, ESA, and G. Bacon (STScI)

They found 14 objects, including one binary (two TNOs orbiting each other like a miniature Pluto-Charon system). All were very faint, with most measuring magnitude 25-27 (more than 100 million times fainter than objects visible to the unaided eye).

By measuring their motion across the sky, astronomers calculated an orbit and distance for each object. Combining the distance and brightness (plus an assumed albedo, or reflectivity), they then estimated the size. The newfound TNOs range from 25 to 60 miles (40 to 100 km) across.

Unlike planets, which tend to have very flat orbits (known as low inclination), some TNOs have orbits significantly tilted from the ecliptic (high inclination). The team examined the size distribution of TNOs with low- versus high-inclination orbits to gain clues about how the population has evolved over the past 4.5 billion years.

Generally, smaller trans-Neptunian objects are the shattered remains of bigger TNOs. Over billions of years, these objects smack together, grinding each other down. The team found that the size distribution of TNOs with low- versus high-inclination orbits is about the same as objects get fainter and smaller. Therefore, both populations (low and high inclination) have similar collisional histories.

This initial study examined only one-third of a square degree of the sky, meaning that there is much more area to survey. Hundreds of additional TNOs may lurk in the Hubble archives at higher ecliptic latitudes. Fuentes and his colleagues intend to continue their search.

“We have proven our ability to detect and characterize TNOs even with data intended for completely different purposes,” Fuentes said.

This research has been accepted for publication in The Astrophysical Journal and is available online.