The largest ring is twice the diameter of the planet’s previously known rings. The rings are so far from the planet, they are being called Uranus’ “second ring system.” One of the new moons shares its orbit with one of the rings. Analysis of the Hubble data also reveals the orbits of Uranus’ family of inner moons have changed significantly over the past decade.

“The detection of these new interacting rings and moons will help us better understand how planetary systems are formed and sustained, which is of key importance to NASA’s scientific exploration goals,” said Dr. Jennifer Wiseman, program scientist for Hubble at NASA Headquarters.

Since dust orbiting Uranus is expected to be depleted by spiraling away, the planet’s rings must be continually replenished with fresh material. “The new discoveries demonstrate that Uranus has a youthful and dynamic system of rings and moons,” said Mark Showalter of the SETI Institute, Baltimore.

Meteoroid impacts continually blast dust off the surface of Mab. The dust then spreads out into a ring around Uranus. Mab’s ring receives a fresh infusion of dust from each impact. Nature keeps the ring supplied with new dust while older dust spirals away or bangs back into the moon.

Showalter and Lissauer have measured numerous changes to the orbits of Uranus’ inner moons since 1994. The moon’s motions were derived from earlier Hubble and Voyager observations. “This appears to be a random or chaotic process, where there is a continual exchange of energy and angular momentum between the moons,” Lissauer said. His calculations predict moons would begin to collide as often as every few million years, which is extraordinarily short compared to the 4.5 billion year age of the Uranian system. 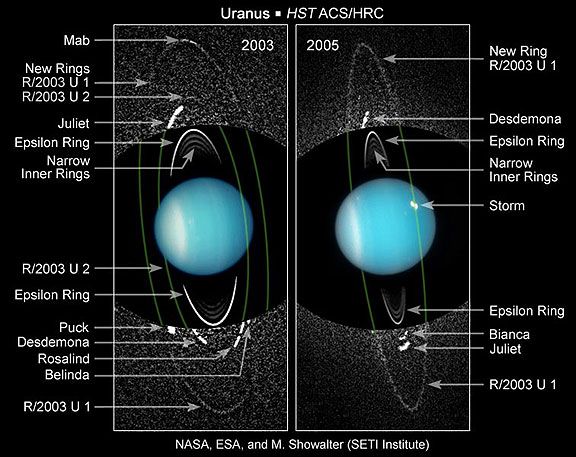 Showalter and Lissauer believe the discovery of the second ring, which orbits closer to the planet than the outer ring, provides further evidence that collisions affect the evolution of the system. This second ring has no visible body to re-supply it with dust. The ring may be a telltale sign of an unseen belt of bodies a few feet to a few miles in size. Showalter proposes that a previous impact to one of Uranus’ moons could have produced the observed debris ring.

Hubble uncovered the rings in August 2004 during a series of 80, four- minute exposures of Uranus. The team later recognized the faint new rings in 24 similar images taken a year earlier. Images from September 2005 reveal the rings even more clearly.

Showalter also found the rings in archival images taken during Voyager 2’s flyby of Uranus in 1986. Uranus’s first nine rings were discovered in 1977 during observations of the planet’s atmosphere. During the Voyager encounters, two other inner rings and 10 moons were discovered. However, no one noticed the outer rings, because they are extremely faint and much farther from the planet than expected. Showalter was able to find them by a careful analysis of nearly 100 Voyager images.

Because the new rings are nearly transparent, they will be easier to see when they tilt edge-on. The new rings will increase in brightness every year as Uranus approaches its equinox, when the sun shines directly over the planet’s equator. When it happens in 2007, all of the rings will be tilted edge-on toward Earth and easier to study. These research data will appear in an upcoming issue of the journal Science.

The Hubble Space Telescope is a project of international cooperation between NASA and the European Space Agency. The Space Telescope Science Institute in Baltimore conducts Hubble science operations. The Institute is operated for NASA by the Association of Universities for Research in Astronomy, Inc., Washington. The Harvard-Smithsonian Center for Astrophysics in Cambridge, Mass. is a joint collaboration between the Smithsonian Astrophysical Observatory and the Harvard College Observatory. For images and information about Hubble and this research on the Web, visit: http://www.nasa.gov/hubble or http://hubblesite.org/news/2005/33