The Smithsonian’s National Air and Space Museum Trophy for Lifetime Achievement, the museum’s highest honor, has been awarded to two distinguished NASA recipients, former astronaut and research pilot C. Gordon Fullerton and planetary scientist John R. Casani. The 2009 winners received their awards at a private evening ceremony at the National Air and Space Museum building on the National Mall in Washington, D.C. April 29.

Fullerton fulfilled three distinguished and remarkable careers in aeronautics and spaceflight with the U.S. Air Force and NASA. He served as a bomber and research test pilot during a 30-year career in the U.S. Air Force, retiring from that service as a lieutenant colonel in 1988. He spent much of that career as an astronaut in NASA’s Apollo, Skylab and Space Shuttle programs.

After serving on the support crews for the Apollo 14, 15, 16 and 17 lunar missions, Fullerton was assigned to one of the two flight crews that piloted the space shuttle prototype Enterprise during the Approach and Landing Test program at NASA’s Dryden Flight Research Center at Edwards Air Force Base in 1977. Fullerton then piloted the eight-day STS-3 space shuttle orbital flight test mission in March 1982, and commanded the STS-51F Spacelab 2 mission on the shuttle orbiter Challenger in 1985. 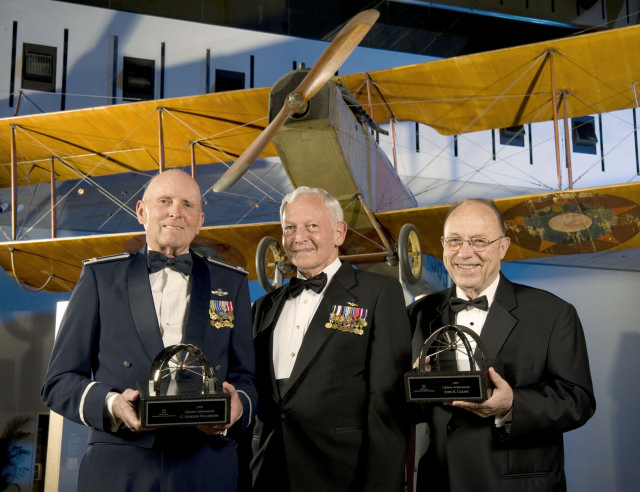 Fullerton then transferred to NASA Dryden, serving NASA for 22 more years as a flight research test pilot at the field center. He was project pilot for a variety of research and support aircraft while at Dryden, ranging from modified high-performance F-15, F-18 and X-29 aircraft to NASA’s DC-8 airborne science laboratory and the modified 747 Shuttle Carrier Aircraft before concluding his NASA career. His last post was chief of the flight crew branch of Dryden’s Flight Operations directorate before he retired from NASA in January 2008.

Fullerton logged more than 380 hours in spaceflight and more than 16,000 hours of flight time in 135 different aircraft. A consummate pilot, Fullerton is recognized for his lifelong contributions to flight airworthiness and safety and to the exacting and dangerous field of flight research.

In a career spanning five decades at the Jet Propulsion Laboratory, Casani’s work has affected discoveries on every major planet. Currently Special Assistant to the Director at JPL, Casani served as chief engineer or project manager on pioneering deep-space programs from Mariner missions to Voyager, Galileo and Cassini. At the very genesis of robotic planetary exploration, he mastered the challenges of designing craft to perform tasks never before attempted. His leadership and engineering expertise have advanced knowledge of the solar system through missions that have yielded increasingly detailed
— and beautiful — images and data.

He is a recipient of several NASA awards, including the Distinguished Service Medal. He received the American Institute of Aeronautics and Astronautics Space System Award, the von Karman Lectureship, the National Space Club Astronauts Engineer Award, and the AAS Space Flight Award. He holds a BSEE and an Honorary Doctor of Science degree from the Pennsylvania and an honorary degree in Aerospace Engineering from the University of Rome. He is a Fellow of the AIAA
and is a member of the National Academy of Engineering and the International Astronautics Academy.

Established in 1985, the NASM’s Lifetime Achievement Award recognizes outstanding achievements in the fields and history of aerospace science and technology.