In an unusual observation, a team of scientists has scanned the northern polar region of Earth with NASA’s Chandra X-ray Observatory. The results show that the aurora borealis, or “northern lights,” also dance in X-ray light, creating changing bright arcs of X-ray energy above the Earth’s surface. 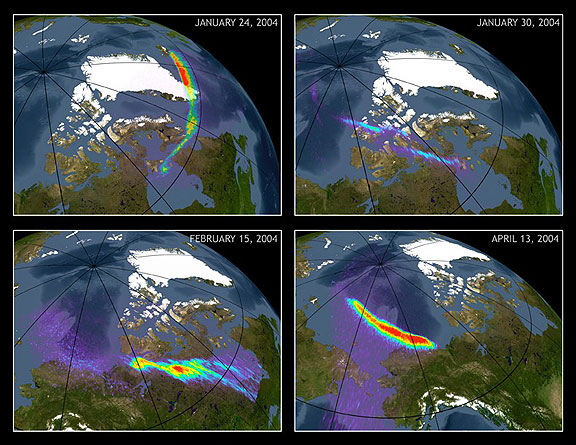 The researchers, led by Dr. Ron Elsner of NASA’s Marshall Space Flight Center in Huntsville, Ala., used Chandra to observe the Earth 10 times over a four-month period in 2004. The images were created from approximately 20-minute scans during which Chandra was aimed at a fixed point in the sky and the Earth’s motion carried the auroral regions through Chandra’s field of view.

From the ground, the aurora are known to change dramatically over time, and this is also the case in X-ray light. The X-rays in this sample of the Chandra observations, which have been superimposed on an approximate representation of the Earth, are seen here.

Auroras are produced by solar storms that eject clouds of energetic charged particles. These particles are deflected when they encounter the Earth’s magnetic field, but in the process large electric voltages are created. Electrons trapped in the Earth’s magnetic field are accelerated by these voltages and spiral along the magnetic field into the polar regions. There they collide with atoms high in the atmosphere and emit X-rays. Chandra has also observed dramatic auroral activity on Jupiter.

Dr. Anil Bhardwaj is the lead author on a paper describing these results in the Journal of Atmospheric and Solar-Terrestrial Physics. Dr. Bhardwaj was a co-investigator on this project and worked with Dr. Elsner at NASA’s Marshall Space Flight Center while this research was conducted.

For information about NASA and agency programs on the Web, visit: http://www.nasa.gov