The most distant jet ever observed was discovered in an
image of a quasar made by NASA’s Chandra X-ray Observatory.

Extending more than 100,000 light-years from the supermassive
black hole powering the quasar, the jet of high-energy
particles provides astronomers with information about the
intensity of the cosmic microwave background radiation 12
billion years ago.

The discovery of this jet was a surprise to the astronomers,
according to team members. Astronomers had previously known
the distant quasar GB1508+5714 to be a powerful X-ray source,
but there had been no indication in previous images of any
complex structure or a jet.

“This jet is especially significant because it allows us to
probe the cosmic background radiation 1.4 billion years after
the big bang,” said Aneta Siemiginowska of the Harvard-
Smithsonian Center for Astrophysics in Cambridge, Mass., lead
author of a report on this research in the November 20
Astrophysical Journal Letters. Prior to this discovery, the
most distant confirmed X-ray jet corresponded to a time about
3 billion years after the big bang. 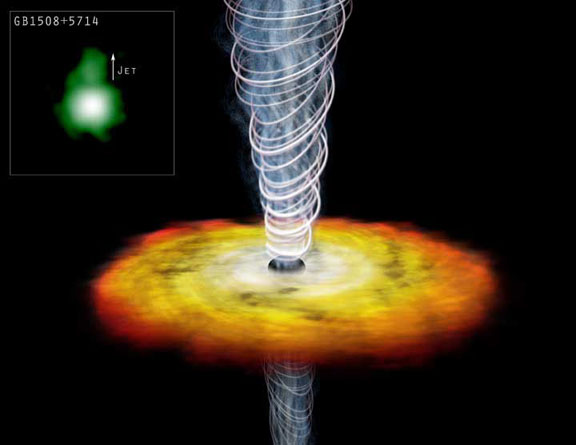 Quasars are thought to be galaxies that harbor an active
central supermassive black hole fueled by infalling gas and
stars. This accretion process is often observed to be
accompanied by the generation of powerful high-energy jets.

As the electrons in the jet fly away from the quasar at near
the speed of light, they move through the sea of cosmic
background radiation left over from the hot early phase of the
universe.

When a fast-moving electron collides with one of these
background photons, it can boost the photon’s energy up into
the X-ray band. The X-ray brightness of the jet depends on the
power in the electron beam and the intensity of the background
radiation.

“Everyone assumes that the background radiation will change in
a predictable way with time, but it is important to have this
check on the predictions,” said Siemiginowska. “This jet is
hopefully just the first in a large sample of these distant
objects that can be used to tell us how the intensity of the
cosmic microwave background changed over time.”

“In fact, if this interpretation is correct, then discovery of
this jet is consistent with our previous prediction that X-ray
jets can be detected at arbitrarily large distances!” said
team member Dan Schwartz, also of the Harvard-Smithsonian
Center for Astrophysics.

Chandra originally observed GB 1508+5714 with the purpose of
studying the X-ray emission from the dust located between the
Earth and the far-flung quasar. The jet was found by
Siemiginowska and her colleagues when they examined the data
once it became available publicly in the Chandra archive.

This led another astronomer to then carefully look at radio
observations of the object. Indeed, archived Very Large Array
data confirmed the existence of the jet associated with the
quasar GB 1508+5714. A paper on the radio observations of GB
1509+5714 has been accepted by Astrophysical Journal Letters
from Teddy Cheung of Brandeis University in Waltham, Mass.

Another group of astronomers led by Weimen Yuan of the
University of Cambridge, United Kingdom, independently
reported the discovery of the extended emission in GB
1508+5714 in X-rays. In a paper to be published in an upcoming
issue of the Monthly Notices of the Royal Astronomical
Society, the authors note that significant energy is being
deposited in the outer regions of the host galaxy at a very
early stage. This energy input could have a profound effect on
the evolution of the galaxy by triggering the formation of
stars, or inhibiting the growth of the galaxy through
accretion of matter from intergalactic space.

Additional information on these results can be found at: