A rare celestial event was captured by NASA’s Chandra X-ray Observatory as
Titan — Saturn’s largest moon and the only moon in the Solar System with a
thick atmosphere — crossed in front of the X-ray bright Crab Nebula. The
X-ray shadow cast by Titan allowed astronomers to make the first X-ray
measurement of the extent of its atmosphere.

On January 5, 2003, Titan transited the Crab Nebula, the remnant of a
supernova explosion that was observed to occur in the year 1054. Although
Saturn and Titan pass within a few degrees of the Crab Nebula every 30
years, they rarely pass directly in front of it. 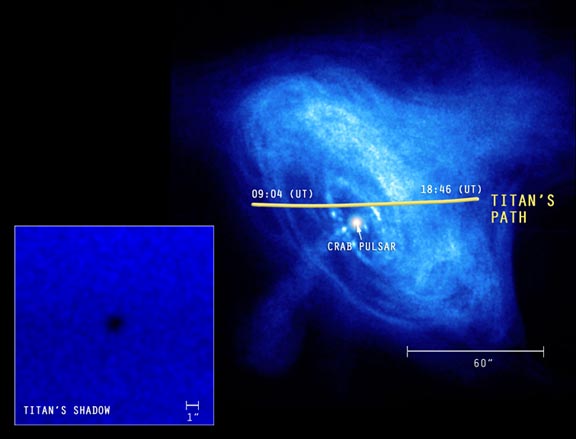 “This may have been the first transit of the Crab Nebula by Titan since the
birth of the Crab Nebula,” said Koji Mori of Pennsylvania State University
in University Park, and lead author on an Astrophysical Journal paper
describing these results. “The next similar conjunction will take place in
the year 2267, so this was truly a once in a lifetime event.”

Chandra’s observation revealed that the diameter of the X-ray shadow cast by
Titan was larger than the diameter of its solid surface. The difference in
diameters gives a measurement of about 550 miles (880 kilometers) for the
height of the X-ray absorbing region of Titan’s atmosphere. The extent of
the upper atmosphere is consistent with, or slightly (10-15%) larger, than
that implied by Voyager I observations made at radio, infrared, and
ultraviolet wavelengths in 1980.

“Saturn was about 5% closer to the Sun in 2003, so increased solar heating
of Titan may account for some of this atmospheric expansion,” said Hiroshi
Tsunemi of Osaka University in Japan, one of the coauthors on the paper.

The X-ray brightness and extent of the Crab Nebula made it possible to study
the tiny X-ray shadow cast by Titan during its transit. By using Chandra to
precisely track Titan’s position, astronomers were able to measure a shadow
one arcsecond in diameter, which corresponds to the size of a dime as viewed
from about two and a half miles.

Unlike almost all of Chandra’s images which are made by focusing X-ray
emission from cosmic sources, Titan’s X-ray shadow image was produced in a
manner similar to a medical X-ray. That is, an X-ray source (the Crab
Nebula) is used to make a shadow image (Titan and its atmosphere) that is
recorded on film (Chandra’s ACIS detector).

Titan’s atmosphere, which is about 95% nitrogen and 5% methane, has a
pressure near the surface that is one and a half times the Earth’s sea level
pressure. Voyager I spacecraft measured the structure of Titan’s atmosphere
at heights below about 300 miles (500 kilometers), and above 600 miles (1000
kilometers). Until the Chandra observations, however, no measurements
existed at heights in the range between 300 and 600 miles.

Understanding the extent of Titan’s atmosphere is important for the planners
of the Cassini-Huygens mission. The Cassini-Huygens spacecraft will reach
Saturn in July of this year to begin a four-year tour of Saturn, its rings
and its moons. The tour will include close flybys of Titan that will take
Cassini as close as 600 miles, and the launching of the Huygens probe that
will land on Titan’s surface.

“If Titan’s atmosphere has really expanded, the trajectory may have to be
changed,” said Tsunemi.

The paper on these results has been accepted and is expected to appear in a
June 2004 issue of The Astrophysical Journal. Other members of the research
team were Haroyoski Katayama (Osaka University), David Burrows and Gordon
Garmine (Penn State University), and Albert Metzger (JPL). Chandra observed
Titan from 9:04 to 18:46 UT on January 5, 2003, using its Advanced CCD
Imaging Spectrometer instrument.

Additional information and images are available at: