By SpaceRef Editor
May 28, 2002
Filed under 2001 Mars Odyssey, Jet Propulsion Laboratory, US 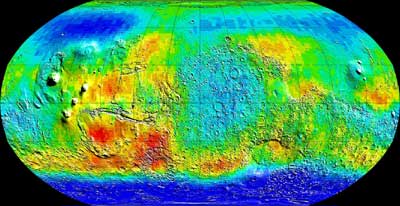 Observations by NASA’s 2001 Mars Odyssey spacecraft show a global view of Mars in intermediate-energy, or epithermal, neutrons. Soil enriched by hydrogen is indicated by the deep blue colors on the map, which show a low intensity of epithermal neutrons. Progressively smaller amounts of hydrogen are shown in the colors light blue, green, yellow and red. The deep blue areas in the polar regions are believed to contain up to 50 percent water ice in the upper one meter (three feet) of the soil. Hydrogen in the far north is hidden at this time beneath a layer of carbon dioxide frost (dry ice). Light blue regions near the equator contain slightly enhanced near-surface hydrogen, which is most likely chemically or physically bound because water ice is not stable near the equator. The view shown here is a map of measurements made during the first three months of mapping using the neutron spectrometer instrument, part of the gamma ray spectrometer instrument suite. The central meridian in this projection is zero degrees longitude. Topographic features are superimposed on the map for geographic reference.

NASA’s Jet Propulsion Laboratory manages the 2001 Mars Odyssey mission for NASA’s Office of Space Science, Washington, D.C. Investigators at Arizona State University in Tempe, the University of Arizona in Tucson, and NASA’s Johnson Space Center, Houston, operate the science instruments. The gamma-ray spectrometer was provided by the University of Arizona in collaboration with the Russian Aviation and Space Agency, which provided the high-energy neutron detector, and the Los Alamos National Laboratories, New Mexico, which provided the neutron spectrometer. Lockheed Martin Astronautics, Denver, is the prime contractor for the project, and developed and built the orbiter. Mission operations are conducted jointly from Lockheed Martin and from JPL, a division of the California Institute of Technology in Pasadena.