Astronomers at the Space Telescope Science Institute today unveiled the deepest portrait of the visible universe ever achieved by humankind. Called the Hubble Ultra Deep Field (HUDF), the million-second-long exposure reveals the first galaxies to emerge from the so-called “dark ages,” the time shortly after the big bang when the first stars reheated the cold, dark universe. The new image should offer new insights into what types of objects reheated the universe long ago.

This historic new view is actually two separate images taken by Hubble’s Advanced Camera for Surveys (ACS) and the Near Infrared Camera and Multi-object Spectrometer (NICMOS). Both images reveal galaxies that are too faint to be seen by ground-based telescopes, or even in Hubble’s previous faraway looks, called the Hubble Deep Fields (HDFs), taken in 1995 and 1998.

“Hubble takes us to within a stone’s throw of the big bang itself,” says Massimo Stiavelli of the Space Telescope Science Institute in Baltimore, Md., and the HUDF project lead. The combination of ACS and NICMOS images will be used to search for galaxies that existed between 400 and 800 million years (corresponding to a redshift range of 7 to 12) after the big bang. A key question for HUDF astronomers is whether the universe appears to be the same at this very early time as it did when the cosmos was between 1 and 2 billion years old.

The HUDF field contains an estimated 10,000 galaxies. In ground-based images, the patch of sky in which the galaxies reside (just one-tenth the diameter of the full Moon) is largely empty. Located in the constellation Fornax, the region is below the constellation Orion.

The final ACS image, assembled by Anton Koekemoer of the Space Telescope Science Institute, is studded with a wide range of galaxies of various sizes, shapes, and colors. In vibrant contrast to the image’s rich harvest of classic spiral and elliptical galaxies, there is a zoo of oddball galaxies littering the field. Some look like toothpicks; others like links on a bracelet. A few appear to be interacting. Their strange shapes are a far cry from the majestic spiral and elliptical galaxies we see today. These oddball galaxies chronicle a period when the universe was more chaotic. Order and structure were just beginning to emerge.

Installed in 2002 during the last servicing mission to the Hubble telescope, the ACS has twice the field of view and a higher sensitivity than the older workhorse camera, the Wide Field Planetary Camera 2, installed during the 1993 servicing mission. “The large discovery efficiency of the ACS is now being exploited in sky surveys such as the HUDF,” Stiavelli says.

The NICMOS sees even farther than the ACS. The NICMOS reveals the farthest galaxies ever seen, because the expanding universe has stretched their light into the near-infrared portion of the spectrum. “The NICMOS provides important additional scientific content to cosmological studies in the HUDF,” says Rodger Thompson of the University of Arizona and the NICMOS Principal Investigator. The ACS uncovered galaxies that existed 800 million years after the big bang (at a redshift of 7). But the NICMOS may have spotted galaxies that lived just 400 million years after the birth of the cosmos (at a redshift of 12). Thompson must confirm the NICMOS discovery with follow-up research.

“The images will also help us prepare for the next step from NICMOS on the Hubble telescope to the James Webb Space Telescope (JWST),” Thompson explains. “The NICMOS images reach back to the distance and time that JWST is destined to explore at much greater sensitivity.” In addition to distant galaxies, the longer infrared wavelengths are sensitive to galaxies that are intrinsically red, such as elliptical galaxies and galaxies that have red colors due to a high degree of dust absorption. 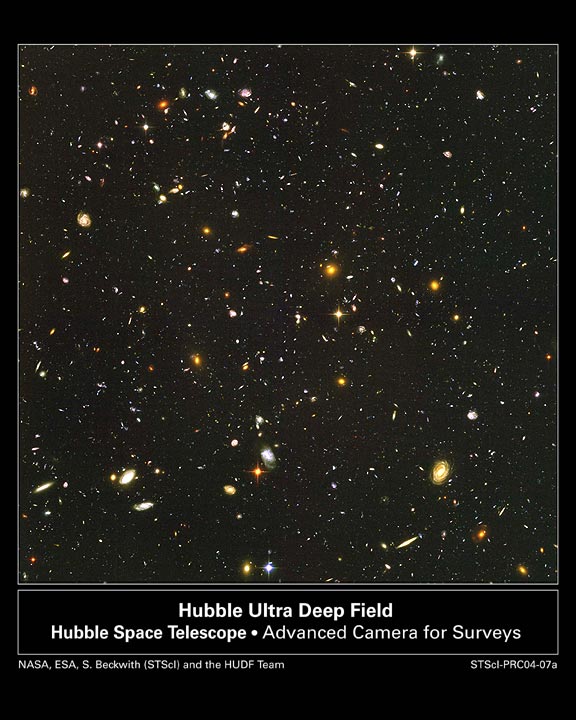 Click on this image to enlarge. Hi res images are online here

The entire HUDF also was observed with the advanced camera’s “grism” spectrograph, a hybrid prism and diffraction grating. “The grism spectra have already yielded the identification of about a thousand objects. Included among them are some of the intensely faint and red points of light in the ACS image, prime candidates for distant galaxies,” says Sangeeta Malhotra of the Space Telescope Science Institute and the Principal Investigator for the Ultra Deep Field’s ACS grism follow-up study. “Based on those identifications, some of these objects are among the farthest and youngest galaxies ever seen. The grism spectra also distinguish among other types of very red objects, such as old and dusty red galaxies, quasars, and cool dwarf stars.”

Galaxies evolved so quickly in the universe that their most important changes happened within a billion years of the big bang. “Where the HDFs showed galaxies when they were youngsters, the HUDF reveals them as toddlers, enmeshed in a period of rapid developmental changes,” Stiavelli says.

Hubble’s ACS allows astronomers to see galaxies two to four times fainter than Hubble could view previously, and is also very sensitive to the near-infrared radiation that allows astronomers to pluck out some of the farthest observable galaxies in the universe. This will hold the record as the deepest-ever view of the universe until ESA, together with NASA, launches the James Webb Space Telescope in 2011.

Though ground-based telescopes have, to date, spied objects that existed just 500 million years after the big bang (at a redshift of 10), they need the help of a rare natural zoom lens in space, called a gravitational lens, to see them. However, the ACS can reveal typical galaxies at these great distances. Even much larger ground-based telescopes with adaptive optics cannot reproduce such a view. The ACS picture required a series of exposures taken over the course of 400 Hubble orbits around Earth. This is such a big chunk of the telescope’s annual observing time that Institute Director Steven Beckwith used his own Director’s Discretionary Time to provide the needed resources.

The HUDF observations began Sept. 24, 2003 and continued through Jan. 16, 2004. The telescope’s ACS camera, the size of a phone booth, captured ancient photons of light that began traversing the universe even before Earth existed. Photons of light from the very faintest objects arrived at a trickle of one photon per minute, compared with millions of photons per minute from nearer galaxies.

Just like the previous HDFs, the new data are expected to galvanize the astronomical community and lead to dozens of research papers that will offer new insights into the birth and evolution of galaxies.