NASA’s current mission in orbit around the moon, the Lunar Reconnaissance Orbiter, or LRO, has been providing crucial insights about our nearest celestial neighbor since its launch in June. At a scientific meeting today, researchers unveiled the latest findings from three instruments of the powerful suite of seven aboard the satellite. LRO is expected to return more data about the moon than all previous orbital missions combined.

At the American Geophysical Union meeting in San Francisco, scientists discussed the latest findings from the LRO Camera, or LROC, the Cosmic Ray Telescope for the Effects of Radiation, or CRaTER, and the Diviner Lunar Radiometer Experiment. Each instrument is returning surprising data and helping scientists map the moon in incredible detail and understand the lunar environment.

LROC has now mapped in high resolution all the Apollo landing sites and 50 sites that were identified by NASA’s Constellation Program to be representative of the wide range of terrains present on the moon.

“From a practical, scientific standpoint, the Apollo landing sites have served as a fantastic source of calibration for the LROC Narrow Angle Cameras,” said Mark Robinson, LROC principal investigator at Arizona State University in Tempe. “Since the locations of some of the hardware left by the astronauts are known to about nine feet absolute accuracy, we can tie the Narrow Angle Camera geometric and timing calibration to the coordinates of the Apollo Laser Ranging Retroreflectors and Apollo Lunar Surface Experiments Packages. This ground truth enables more accurate coordinates to be derived for virtually anywhere on the moon. Scientists are currently analyzing brightness differences of the surface material stirred up by the Apollo astronauts, comparing them with the local surroundings to estimate physical properties of the surface material. Such analyses will provide critical information for interpreting remote sensing data from LRO, as well as from India’s Chandrayaan-1, and Japan’s Kaguya missions.”

Robinson added, “The 50 Constellation sites have been imaged to some extent at meter or better spatial resolution by the LROC Cameras.” The globally distributed sites were chosen to provide Constellation project engineers with a range of lunar surface characteristics that they might encounter. Robinson said, “The high-resolution images reveal a moon whose surface is geologically complex, scientifically compelling, and far more varied than one might expect on the basis of the limited number of landing sites from previous missions.”

LRO’s Diviner instrument has discovered that the bottoms of polar craters in permanent shadow can be brutally cold. Mid-winter nighttime surface temperatures inside the coldest craters in the north polar region dip down to 26 Kelvin (416 below zero Fahrenheit, or minus 249 degrees Celsius). “These are the coldest temperatures that have been measured thus far anywhere in the solar system,” said David Paige, Diviner principal investigator at the University of California, Los Angeles. “These regions are cold enough to trap a wide range of compounds such as water, carbon dioxide, and organic molecules. There could be all kinds of interesting compounds trapped there.”

LRO’s Crater instrument is measuring the amount of space radiation at the moon to help determine the level of protection required for astronauts during lengthy expeditions on the moon or to other solar system destinations. “This surprising solar minimum, or quiet period for the sun regarding magnetic activity, has led to the highest level of space radiation in the form of Galactic Cosmic Rays, or GCRs, fluxes and dose rates during the era of human space exploration,” said Harlan Spence, Crater principal investigator of Boston University and the University of New Hampshire, Durham. “The rarest events – cosmic rays with enough energy to punch through the whole telescope – are seen once per second, nearly twice higher than anticipated. Crater radiation measurements taken during this unique, worst-case solar minimum will help us design safe shelters for astronauts.”

GCRs are electrically charged particles – electrons and atomic nuclei – moving at nearly the speed of light into the solar system. Magnetic fields carried by the solar wind deflect many GCRs before they approach the inner solar system. However, the sun is in an unusually long and deep quiet period, and the interplanetary magnetic fields and solar wind pressures are the lowest yet measured, allowing an unprecedented influx of GCRs.

Scientists expected the level of GCRs to drop as LRO got closer to the moon for its mapping orbit. This is because GCRs come from all directions in deep space, but the moon acts as a shield, blocking the particles behind it across about half the sky in close lunar proximity. However, the rate did not drop as much as expected. “This is likely due to interactions between the Galactic Cosmic Rays and the lunar surface,” said Spence. “The primary GCRs produce secondary radiation by shattering atoms in the lunar surface material; the lunar surface then becomes a significant secondary source of particles, and the resulting radiation dose is thereby 30-40 percent higher than expected.”

Cosmic rays also originate closer to home, from stormy magnetic activity on the sun. The sun goes through a cycle of activity, approximately 11 years long, from quiet to stormy and back again. During stormy periods, events like solar flares, magnetic explosions in the sun’s atmosphere, propel charged particles to high speeds. “We’re eager to see a big solar flare, so we can evaluate the hazards from solar-generated cosmic rays, but we’ll probably have to wait a couple years until the sun wakes up,” said Spence. 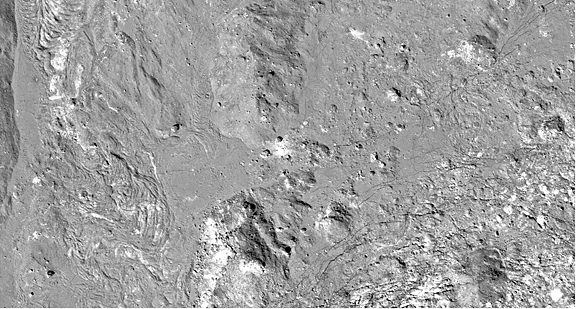 Giordano Bruno is one of the youngest large craters (22 km diameter) on the Moon. How old is “youngest”? Written accounts of twelfth century observations of a bright flash on the Moon may record the event that formed Giordano Bruno crater? That idea was proposed after the first high resolution pictures of the crater were analyzed from the Apollo era of lunar exploration. Scientists could see that the crater was very young, and was in the area of the Moon corresponding to the bright flash, so it seemed possible that the flash and crater were related. More recently a team of scientists analyzing high resolution images acquired by the Japanese lunar orbiter Kaguya estimated that the crater formed more than one million years ago. Very young by lunar standards, but certainly not consistent with the 12th century eyewitness reports! The Kaguya team determined the age of Giordano Bruno by counting the number of craters that formed on the crater subsequent to its formation. Were some of the small impacts discovered on the crater actually formed as late stage ejecta from the Giordano impact event itself rained down on the crater? If so the age may be younger than the current estimate. Hopefully, in the near future the true age of Giordano Bruno can be determined by radiometric age dating of impact melt rocks returned by the next generation of lunar explorers.

The very high resolution images being returned by LROC are revealing impact crater features in exquisite detail. Impact melt deposits display a wide range of forms on the floor, terraces, and flanks of Giordano Bruno. Wrinkles seen in upper left indicates the viscous nature of melt as it flowed against the crater wall (far left). Although formed by a different process, impact melts flow in much the same way as lava flows, forming lobes and exhibiting channels and levees. Like lava flows, they cease to move when their source is depleted or the melt cools and freezes into solid rock. The distribution of impact melts in and around impact craters provides important markers of the energy and dynamics of large scale impacts. As LROC collects more images of young craters scientists will be able to more accurately model impact processes and better understand the details of these incredibly energetic events. The scene is about 2200 m across; image resolution is 1.6 meters.