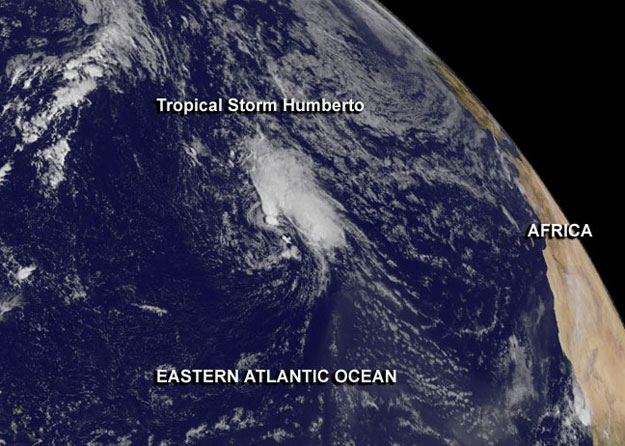 Humberto is the second “zombie” tropical storm of the Atlantic Ocean season. That is, it’s the second tropical storm that degenerated into a remnant low pressure area only to make a comeback as a tropical storm. NASA’s HS3 hurricane mission sent an unmanned Global Hawk Aircraft out to the eastern Atlantic to investigate Humberto on Sept. 16.

On Sunday, Sept. 15, Humberto weakened to a remnant low pressure area when it hit an area of strong wind shear. The wind shear eased and Humberto regained tropical storm strength on Sept. 16, making it the second “zombie” storm in the Atlantic Ocean basin this year. The first was Tropical Storm Gabrielle that fell apart and re-formed in early September in the western Atlantic.

NASA’s GOES Project at the NASA Goddard Space Flight Center uses the data gathered by NOAA’s GOES series of satellites and makes them into images and animations. On Sept. 16 an image was created that showed Humberto had regained form as a tropical storm.

At 11 a.m. EDT/1500 UTC, re-born Tropical Storm Humberto had maximum sustained winds near 40 mph/65 kph. The National Hurricane Center expects slow strengthening over the next couple of days. It was centered near latitude 27.2 north and longitude 43.2 west, about 1,200 miles/1,930 km southwest of the Azores Islands. Humberto is moving toward the west-northwest near 8 mph/13 kph and is expected to move northwest and then the north-northwest

NASA’s Global Hawk 872 unmanned aircraft took off at 10:42 a.m. EDT from Runway 22 at NASA’s Wallops Flight Facility, Wallops Island, Va., Sept. 16 to investigate the zombie storm. NASA 872 will disperse dropsondes throughout Humberto and gather data on the environment of the storm as it did on Sept. 5 with Gabrielle, the first zombie storm of the season.

Global Hawk aircraft are well-suited for hurricane investigations because they can fly for as long as 28 hours and over-fly hurricanes at altitudes greater than 60,000 feet (18.3 km).

HS3 is a mission that brings together several NASA centers with federal and university partners to investigate the processes that underlie hurricane formation and intensity change in the Atlantic Ocean basin. Among those factors, HS3 will address the controversial role of the hot, dry and dusty Saharan Air Layer in tropical storm formation and intensification and the extent to which deep convection in the inner-core region of storms is a key driver of intensity change. The HS3 mission will operate between Aug. 20 and Sept. 23.