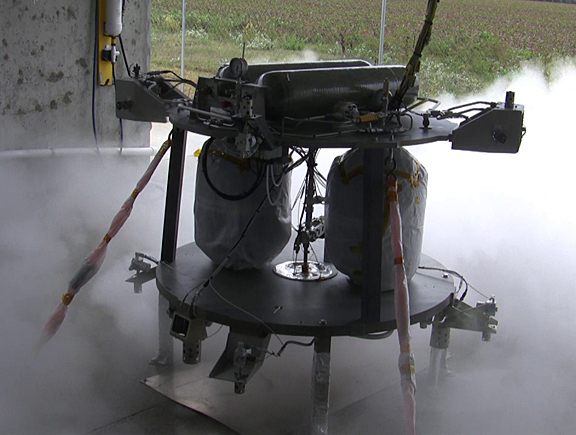 NASA’s Robotic Lunar Lander Development Project at Marshall Space Flight Center in Huntsville, Ala., has completed a series of hot fire tests and taken delivery of a new propulsion system for integration into a more sophisticated free-flying autonomous robotic lander prototype. The project is partnered with the Johns Hopkins University Applied Physics Laboratory in Laurel, Md., to develop a new generation of small, smart, versatile robotic landers to achieve scientific and exploration goals on the surface of the moon and near-Earth asteroids.

The new robotic lander prototype will continue to mature the development of a robotic lander capability by bringing online an autonomous flying test lander that will be capable of flying up to sixty seconds, testing the guidance, navigation and control system by demonstrating a controlled landing in a simulated low gravity environment.

By the spring of 2011, the new prototype lander will begin flight tests at the U.S. Army’s Redstone Arsenal Test Center in Huntsville, Ala.

The prototype’s new propulsion system consists of 12 small attitude control thrusters, three primary descent thrusters to control the vehicle’s altitude, and one large “gravity-canceling” thruster which offsets a portion of the prototype’s weight to simulate a lower gravity environment, like that of the moon and asteroids. The prototype uses a green propellant, hydrogen peroxide, in a stronger concentration of a solution commonly used in homes as a disinfectant. The by-products after use are water and oxygen.

“The propulsion hardware acceptance test consisted of a series of tests that verified the performance of each thruster in the propulsion system,” said Julie Bassler, Robotic Lunar Lander Development Project Manager. “The series culminated in a test that characterized the entire system by running a scripted set of thruster firings based on a flight scenario simulation.”

The propulsion system is currently at Teledyne Brown’s manufacturing facility in Huntsville, Ala., for integration with the structure and avionics to complete the new robotic lander prototype. Dynetics Corp. developed the robotic lander prototype propulsion system under the management of the Von Braun Center for Science and Innovation both located in Huntsville, Ala.

“This is the second phase of a robotic lander prototype development program,” said Bassler. “Our initial “cold gas” prototype was built, delivered and successfully flight tested at the Marshall Center in a record nine months, providing a physical and tangible demonstration of capabilities related to the critical terminal descent and landing phases for an airless body mission.”

The first robotic lander prototype has a record flight time of ten seconds and descended from three meters altitude. This first robotic lander prototype began flight tests in September 2009 and has completed 142 flight tests, providing a platform to develop and test algorithms, sensors, avionics, ground and flight software and ground systems to support autonomous landings on airless bodies, where aero-braking and parachutes are not options.

For more photos of the hardware visit: www.nasa.gov/roboticlander