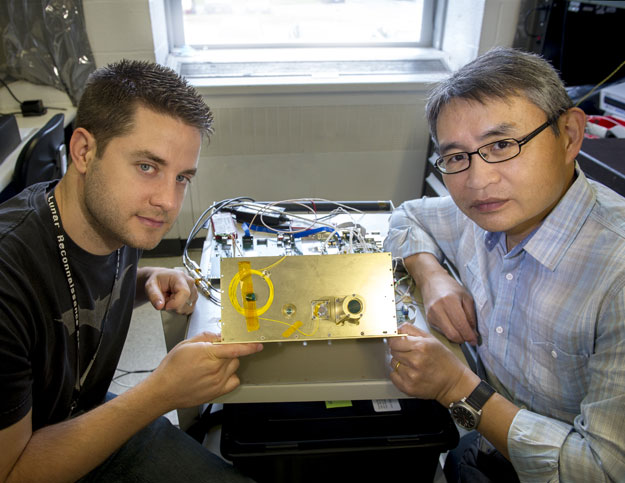 Nat Gill and Tony Yu are developing new lidar systems for satellite servicing and asteroid retrieval. They are shown here with hardware they have developed for the Goddard Rendezvous Solid-state Scanning Lidar. Image Credit:  NASA/W. Hrybyk

Building, fixing, and refueling space-based assets or rendezvousing with a comet or asteroid will require a robotic vehicle and a super-precise, high-resolution 3-D imaging lidar that will generate real-time images needed to guide the vehicle to a target traveling at thousands of miles per hour.

A team of technologists at NASA’s Goddard Space Flight Center in Greenbelt, Maryland, now is developing a next-generation 3-D scanning lidar — dubbed the Goddard Reconfiguable Solid-state Scanning Lidar (GRSSLi) — that could provide the imagery needed to execute these orbital dances. “We have made a tremendous amount of progress,” said Nat Gill, GRSSLi principal investigator at Goddard. “We have a long way to go, but we hope to validate the GRSSLi system this fall.”

The current system has achieved a technology-readiness level of five. In the parlance of NASA engineers, this means that once the team completes this iteration of GRSSLi, the team will be ready to build another system that would undergo vibration and thermal-vacuum testing.

Centimeter-Level Resolution Over a Range of Distances

GRSSLi is a next-generation scanning lidar based on technologies developed by the Army Research Laboratory, which later transferred the technology to Spectrolab, Inc., a wholly owned subsidiary The Boeing Co. The company now markets the instrument as the SpectroScan 3D.

GRSSLi, however, will take 3-D imaging lidar to the next level — all from a small, low-cost, low-weight platform capable of centimeter-level resolution over a range of distances, from meters to kilometers, said GRSSLi Co-Principal Investigator Tony Yu, who received Goddard Internal Research and Development (IRAD) program funding to help advance GRSSLi and its close cousin, a non-scanning 3-D imaging lidar.

Equipped with a low-power, eye-safe laser, a micro-electro-mechanical scanner, and a single photodetector, GRSSLi will “paint” a scene with the scanning laser and its detector will sense the reflected light to create a high-resolution 3-D image at kilometer distances — a significant increase in capability over current imaging lidars that are effective only at meter distances. Just as important, the instrument is equipped with onboard “vision” algorithms or software that interpret the three-dimensional image returned by the lidar. These algorithms estimate location and attitude — or in other words, the pose — of a target relative to the lidar.

“The SpectroScan 3D is a low-cost lidar, but it can’t provide centimeter-level (less than an inch) resolution beyond 30 meters (~98 feet),” Yu said. “We are retrofitting this lidar system with a high-energy laser system to extend the range to beyond one kilometer.” GRSSLi currently has a limited range of about 20 meters (~66 feet), Yu said. This year, the goal is to extend the range to 100 meters (0.6 miles) by increasing the power of the laser transmitter and adding a more sensitive detector.

The lidar, however, wouldn’t be limited to servicing and repairing satellites and other orbiting assets, Yu said. Under the same IRAD task, Yu and Gill are working to advance a non-scanning version of GRSSLi that would be ideal for close approaches to asteroids. “We view the 3-D scanning lidar as an intermediate step to a non-scanning lidar system,” Yu said.

This particular instrument would employ a flash lidar, which doesn’t paint a scene with a mechanical scanner, but rather illuminates the target with a single pulse of laser light — much like a camera flash. The advantage is the elimination of moving parts that could be prone to failure. A telescope then would capture the returning photons and image them on a photon-sensitive detector array. Each pixel of that array would measure the photons’ times of flight to create a 3-D image of the target.

Although flash lidars are available commercially — and, in fact, one is baselined for the Goddard-led OSIRIS-REx mission — they do not produce high-resolution images from kilometer (mile) distances, a capability that would benefit science and military applications, Yu said.

“A need exists for long-to-short range, low-cost, reliable multifunctional imaging lidars, not only for asteroid rendezvous and planetary rovers, but also for satellite servicing,” Yu said. “We are making progress, but we do have a way to go.”