NASA scientists have that found cirrus clouds, formed by
contrails from aircraft engine exhaust, are capable of
increasing average surface temperatures enough to account for
a warming trend in the United States that occurred between
1975 and 1994.

“This result shows the increased cirrus coverage,
attributable to air traffic, could account for nearly all of
the warming observed over the United States for nearly 20
years starting in 1975, but it is important to acknowledge
contrails would add to and not replace any greenhouse gas
effect,” said Patrick Minnis, senior research scientist at
NASA’s Langley Research Center in Hampton, Va. The study was
published April 15 in the Journal of Climate. “During the
same period, warming occurred in many other areas where
cirrus coverage decreased or remained steady,” he added.

“This study demonstrates that human activity has a visible
and significant impact on cloud cover and, therefore, on
climate. It indicates that contrails should be included in
climate change scenarios,” Minnis said. 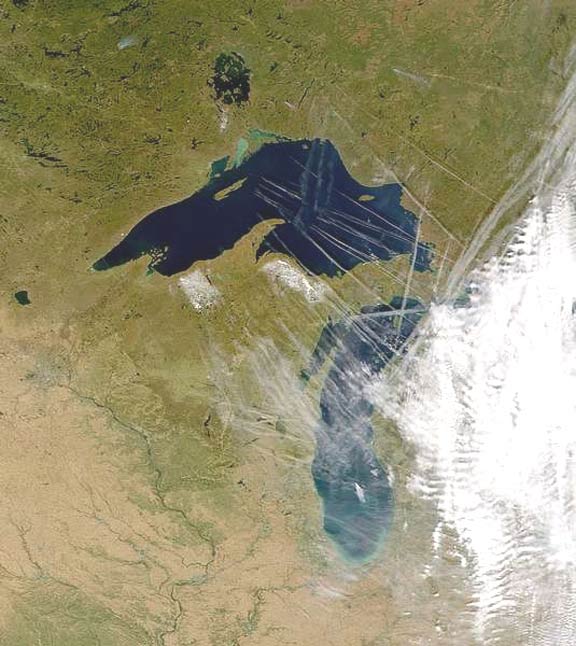 Minnis determined the observed one percent per decade
increase in cirrus cloud cover over the United States is
likely due to air traffic-induced contrails. Using published
results from NASA’s Goddard Institute for Space Studies (New
York) general circulation model, Minnis and his colleagues
estimated contrails and their resulting cirrus clouds would
increase surface and lower atmospheric temperatures by 0.36
to 0.54 degrees Fahrenheit per decade. Weather service data
reveal surface and lower atmospheric temperatures across
North America rose by almost 0.5 degree Fahrenheit per decade
between 1975 and 1994.

Both air traffic and cirrus coverage increased during the
period of warming despite no changes in the NCEP humidity at
jet cruise altitudes over the United States. By contrast,
humidity at flight altitudes decreased over other land areas,
such as Asia, and was accompanied by less cirrus coverage,
except over Western Europe, where air traffic is very heavy.

Cirrus coverage also rose in the North Pacific and North
Atlantic flight corridors. The trends in cirrus cover and
warming over the United States were greatest during winter
and spring, the same seasons when contrails are most
frequent. These results, along with findings from earlier
studies, led to the conclusion that contrails caused the
increase in cirrus clouds.

“This study indicates that contrails already have substantial
regional effects where air traffic is heavy, such as over the
United States. As air travel continues growing in other
areas, the impact could become globally significant,” Minnis
said.

Humidity is the amount of water vapor in the air and
determines how long contrails remain in the atmosphere.
Contrails that persist for an extended period of time are
most likely to impact the climate.

Contrails form high in the atmosphere when the mixture of
water vapor in the aircraft exhaust and the air condenses and
freezes. Persisting contrails can spread into extensive
cirrus clouds that tend to warm the Earth, because they
reflect less sunlight than the amount of heat they trap. The
balance between Earth’s incoming sunlight and outgoing heat
drives climate change.

For information about this research on the Internet, visit:

For information about NASA on the Internet, visit: