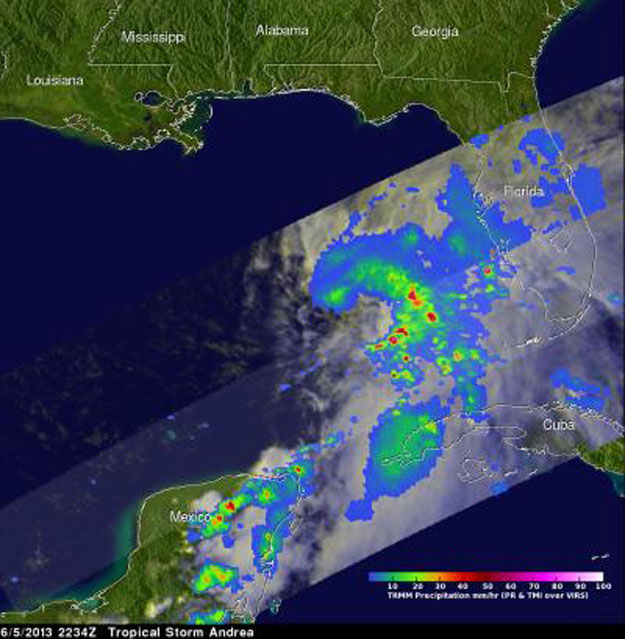 NASA’s TRMM satellite passed over Tropical Storm Andrea right after it was named, while NASA’s Terra satellite captured a visible image of the storm’s reach hours beforehand. TRMM measures rainfall from space and saw that rainfall rates in the southern part of the storm was falling at almost 5 inches per hour.

NASA’s Terra satellite passed over Tropical Storm Andrea on June 5 at 16:25 UTC (12:25 p.m. EDT) and the Moderate Resolution Imaging Spectroradiometer or MODIS instrument, captured a visible image of the storm. At that time, Andrea’s clouds had already extended over more than half of Florida.

At 8 p.m. EDT on Wednesday, June 5, System 91L became the first tropical storm of the Atlantic Ocean hurricane season. Tropical Storm Andrea was centered near 25.5 North and 86.5 West, about 300 miles (485 km) southwest of Tampa, Fla. At the time Andrea intensified into a tropical storm, its maximum sustained winds were near 40 mph (65 kph).

NASA’s Tropical Rainfall Measuring Mission or TRMM satellite flew directly above tropical storm Andrea on June 5 at 2234 UTC (6:34 p.m. EDT) just an hour after the National Hurricane Center named the storm. A rainfall analysis from TRMM’s Microwave Imager and Precipitation Radar (PR) instruments showed that moderate to heavy rain was wrapping around the eastern side of the storm. The heaviest rainfall of 124.5 mm per hour (~4.9 inches per hour) from TRMM PR data was found on Andrea’s southeast side.

NASA’s GOES Project at NASA’s Goddard Space Flight Center in Greenbelt, Md. created an animation that shows the development of System 91L into Tropical Storm Andrea, and its progression over June 4, 5 and 6, as it heads for a landfall in Florida.

A Tropical Storm Warning is in effect for the west coast of Florida from Boca Grande to Indian Pass, from Flagler Beach, Fla. to Cape Charles Light, Va., the Pamlico and Albemarle Sounds, and the lower Chesapeake Bay south of New Point Comfort, Va. For the most up to date forecasts, visit the National Hurricane Center web page at: http://www.nhc.noaa.gov.