According to a NASA scientist, the pieces to a years-old scientific puzzle have come together to confirm warmer water temperatures are creeping into the Earth’s colder areas. Those warm waters are increasing melting and accelerating ice flow in polar areas.

This conclusion appears in an article by Robert Bindschadler, a glaciologist at NASA’s Goddard Space Flight Center in Greenbelt, Md. His article is in the March 24 issue of Science magazine. 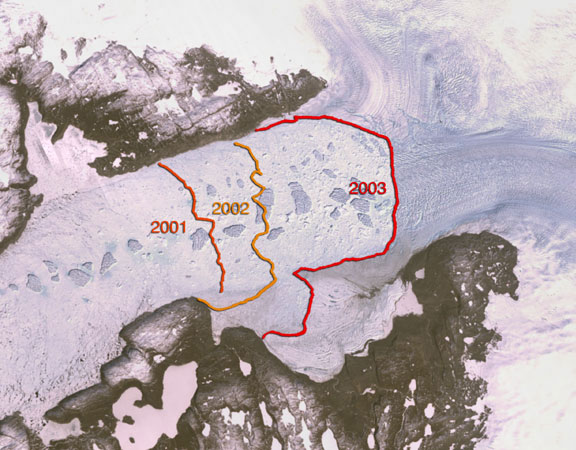 Image: Jakobshavn Glacier Retreat 2001-2003: Jakobshavn Isbrae holds the record as Greenland’s fastest moving glacier and major contributor to the mass balance of the continental ice sheet. Starting in late 2000, following a period of slowing down in the mid 1990s, the glacier showed significant acceleration and nearly doubled its discharge of ice. The following image from the Landsat satellite shows the retreat of Jakobshavn’s calving front from 2001 to 2003. Credit: NASA

Temperatures collected from ships and buoys showed a warming of all oceans. That increase began before satellite sensors detected temperature increases of sea surfaces. Most of the warming was limited to the oceans’ upper 1000 meters (.62 mile), except in the North Atlantic. In the cold North Atlantic waters, heat penetrated even deeper. This warming has increased the melting of sea ice in the North Atlantic. Overall ocean heat content changes are monitored by ocean altimetry missions like TOPEX and Jason-1 and the on site Argo buoy network floats that broadcast measurements to a satellite. These provide information on ocean temperatures.

It has another effect, however, which may potentially be of great significance to sea level rise, and that is that these warm waters are beginning to melt the underside of the floating fringes of the Greenland ice sheet, even at great depths, It is these fringes that have been holding back vast stores of ice locked up in the Greenland ice sheet, and as this ice has been melting, the glaciers have hastened their flow to the sea.

A recent assessment in the changes in speed and the amount of snow and ice around Greenland confirms a large melting of outflow glaciers and acceleration of ice flow. Three large glaciers, the Kangerdlugssuaq, Helheim and Jakobshavns Isbrae have been melting at a rapid rate over the past several years. Jakobshavns, the largest outlet glacier on Greenland’s east coast, has been annually thinning at 15 meters (49.2 feet) since 1997. The other two glaciers have also been thinning. Kangerdlugssuaq at 40 meters (131.2 feet) per year and Helheim at 25 meters per year (82.0 feet), which can’t be explained by normal melting. All of these glaciers have also been accelerating. This isn’t just happening in Greenland, scientists are seeing similar behavior in Antarctica as well.

“Deep outlet glaciers around both major ice sheets are accelerating and thinning means warm water has reached them,” Bindschadler said. “I see no process to reverse this and expect increased ice sheet discharge to continue and probably to spread with the result being further accelerations to sea level rise.”

“Understanding just how significant these rapid losses are to the overall ice sheet balance requires a comprehensive look at melt, accumulation and flow characteristics over the entire ice sheet,” said Waleed Abdalati, head of the Cryospheric Sciences Branch at Goddard. “Various satellite and aircraft observations are providing this critical information and are shaping our understanding of Greenland’s behavior. The story is still unfolding, but the dramatic changes at the margins are quite striking.”

The evidence is clear to Bindschadler that increased snowfall predicted in a warmer climate can’t possibly keep up.

While it is true that the piece is opinion, it fits previously disconnected pieces of the climate and ice puzzle together and attempts to draw conclusions. The conclusions cannot be verified without new measurements, and NASA is compiling them with satellites like ICESat. ICESat enables scientists to precisely measure changes in the elevation of ice and snow on glaciers and ice sheets as they respond to a changing climate.

In an effort to understand these changes, NASA continues to monitor sea surface temperatures; and, the behavior of glaciers and ice sheets around the world.

Bindschadler said as sea ice diminishes over time in the Arctic and parts of the Antarctic, warmer waters in polar areas will come closer to the surface. They will reach shallower tidewater glaciers, and increase melting at their bases triggering additional ice flow into the oceans. Over time, the warmer waters also will move northward along Greenland’s coasts initiating acceleration and thinning of additional glaciers, leading to additional sea level rise.