Though the Viking Landers in the 1970s observed the shadow of
one Mars’ two moons, Phobos, moving across the landscape, and
Mars Pathfinder in 1997 observed Phobos emerge at night from
the shadow of Mars, no previous mission has ever directly
observed a moon pass in front of the sun from the surface of
another world. 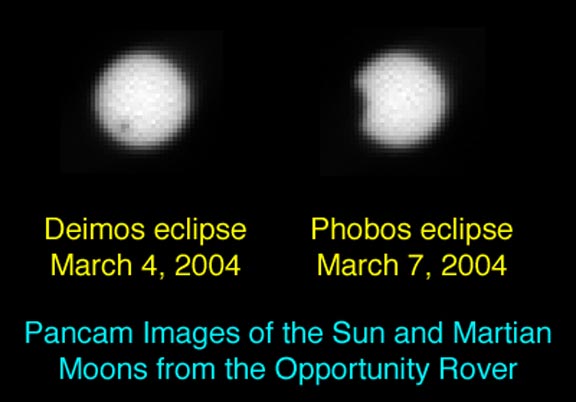 The current rovers began their eclipse-watching campaign this
month. Opportunity’s panoramic camera caught Mars’ smaller
moon, Deimos, as a speck crossing the disc of the sun on March
4. The same camera then captured an image of the larger moon,
Phobos, grazing the edge of the sun’s disc on March 7.

Rover controllers at NASA’s Jet Propulsion Laboratory (JPL),
Pasadena, Calif., are planning to use the panoramic cameras on
both Opportunity and Spirit for several similar events in the
next six weeks. Dr. Jim Bell of Cornell University, Ithaca,
N.Y., lead scientist for those cameras, expects the most
dramatic images may be the one of Phobos planned for March 10.

“Scientifically, we’re interested in timing these events to
possibly allow refinement of the orbits and orbital evolution
of these natural satellites,” Bell said. “It’s also exciting,
historic and just plain cool to be able to observe eclipses on
another planet at all,” he said.

Depending on the orientation of Phobos as it passes between the
sun and the rovers, the images might also add new information
about the elongated shape of that moon.

Phobos is about 27 kilometers long by about 18 kilometers
across its smallest dimension (17 miles by 11 miles). Deimos’
dimensions are about half as much, but the pair’s difference in
size as they appear from Mars’ surface is even greater, because
Phobos flies in a much lower orbit.

The rovers’ panoramic cameras observe the sun nearly every
martian day as a way to gain information about how Mars’
atmosphere affects the sunlight. The challenge for the eclipse
observations is in the timing. Deimos crosses the sun’s disc in
only about 50 to 60 seconds. Phobos moves even more quickly,
crossing the sun in only 20 to 30 seconds.

Scientists use the term “transit” for an eclipse in which the
intervening body covers only a fraction of the more-distant
body. For example, from Earth, the planet Venus will be seen to
transit the sun on June 8, for the first time since 1882.
Transits of the sun by Mercury and transits of Jupiter by
Jupiter’s moons are more common observations from Earth.

From Earth, our moon and the sun have the appearance of almost
identically sized discs in the sky, so the moon almost exactly
covers the sun during a total solar eclipse. Because Mars is
farther from the sun than Earth is, the sun looks only about
two-thirds as wide from Mars as it does from Earth. However,
Mars’ moons are so small that even Phobos covers only about
half of the sun’s disc during an eclipse seen from Mars.

JPL, a division of the California Institute of Technology in
Pasadena, manages the Mars Exploration Rover project for NASA’s
Office of Space Science, Washington. Images and additional
information about the project are available from JPL at:

Images of those two events are available online at:

and from Cornell University at: