By SpaceRef Editor
January 13, 2011
Filed under Asteroids and Comets, Jet Propulsion Laboratory, US 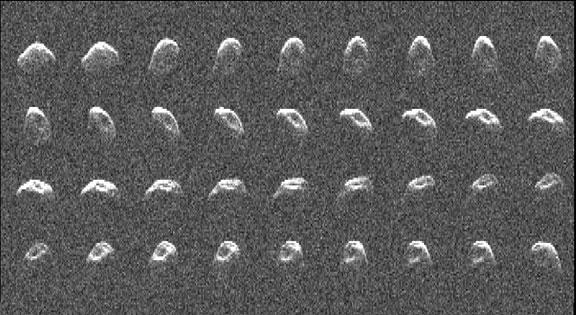 Radar imaging at NASA’s Goldstone Solar System Radar in the California desert on Dec. 11 and 12, 2010, revealed defining characteristics of recently discovered asteroid 2010 JL33. The images have been made into a short movie that shows the celestial object’s rotation and shape. A team led by Marina Brozovic, a scientist at NASA’s Jet Propulsion Laboratory in Pasadena, Calif., made the discovery.

“Asteroid 2010 JL33 was discovered on May 6 by the Mount Lemmon Survey in Arizona, but prior to the radar observations, little was known about it,” said Lance Benner, a scientist at JPL. “By using the Goldstone Solar System Radar, we can obtain detailed images that reveal the asteroid’s size, shape and rotational rate, improve its orbit, and even make out specific surface features.”

Data from the radar reveal 2010 JL33 to be an irregular, elongated object roughly 1.8 kilometers (1.1 miles) wide that rotates once every nine hours. The asteroid’s most conspicuous feature is a large concavity that may be an impact crater. The images in the movie span about 90 percent of one rotation.

At the time it was imaged, the asteroid was about 22 times the distance between Earth and the moon (8.5 million kilometers, or 5.3 million miles). At that distance, the radio signals from the Goldstone radar dish used to make the images took 56 seconds to make the roundtrip from Earth to the asteroid and back to Earth again.

The 70-meter (230-foot) Goldstone antenna in California’s Mojave Desert, part of NASA’s Deep Space network, is one of only two facilities capable of imaging asteroids with radar. The other is the National Science Foundation’s 1,000-foot-diameter (305 meters) Arecibo Observatory in Puerto Rico. The capabilities of the two instruments are complementary. The Arecibo radar is about 20 times more sensitive, can see about one-third of the sky, and can detect asteroids about twice as far away. Goldstone is fully steerable, can see about 80 percent of the sky, can track objects several times longer per day, and can image asteroids at finer spatial resolution. To date, Goldstone and Arecibo have observed 272 near-Earth asteroids and 14 comets with radar. JPL manages the Goldstone Solar System Radar and the Deep Space Network for NASA.

More information about asteroid radar research is at: http://echo.jpl.nasa.gov/ .

More information about the Deep Space Network is at: http://deepspace.jpl.nasa.gov/dsn .