By SpaceRef Editor
December 17, 2010
Filed under Commerce, NASA HQ, US 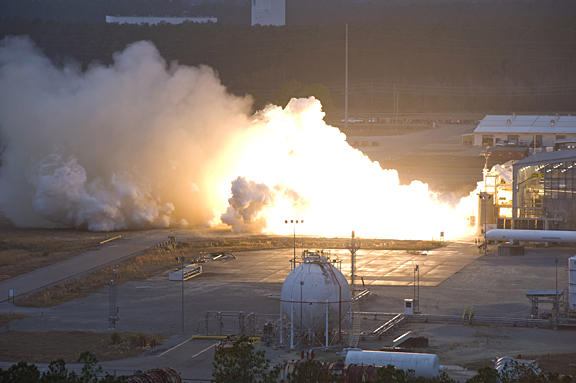 “Once again, the Orbital and Aerojet team have achieved a major milestone with the AJ26 engine,” said Doug Cooke, associate administrator for the Exploration Systems Mission Directorate at NASA Headquarters in Washington. “This success moves Orbital closer to its goal of providing NASA with commercial space transportation services to the space station.”

The 55-second firing was the second in a series of verification tests being conducted at the south Mississippi facility. A third hot-fire test also is planned to verify tuning of engine control valves.

“This second test of the AJ26 engine not only moves Orbital’s commercial space transport plans a step ahead, but also demonstrates again the quality and versatility of Stennis facilities and the expertise of our test and support team,” Stennis Director Patrick Scheuermann said.

The AJ26 engine is designed to power the Taurus II space vehicle on flights to low Earth orbit. NASA’s partnership with Orbital was formed under the agency’s Commercial Orbital Transportation Services joint research and development project. The company is under contract with NASA to provide eight cargo missions to the space station through 2015.

For information about Stennis, visit: http://www.nasa.gov/centers/stennis