This view from where NASA’s Mars Exploration Rover Spirit stood on the rover’s 149th martian day, or sol (June 3, 2004), shows terrain the rover has crossed since then. The yellow line traces the path Spirit has taken since arriving at the “Columbia Hills.” Labels show the informal names of rocks the rover has studied along the way. Spirit is currently headed east, traversing the flanks of the hills en route to an overlook above a steep valley that is out of view from this perspective. Scientists hope to find more layered rocks that will tell a story of ancient water on Mars.

Spirit has traveled 498 meters (more than one-quarter of a mile) and ascended 20 meters (66 feet) above the plains since arriving at the “Columbia Hills” on sol 156 (June 11, 2004). It covered much of that distance driving on only five of its six wheels.

The images used to make this approximately true-color mosaic were taken with Spirit’s panoramic camera from about 300 meters (984 feet) away from the base of the hills, using filters centered at wavelengths of 600, 530 and 480 nanometers. 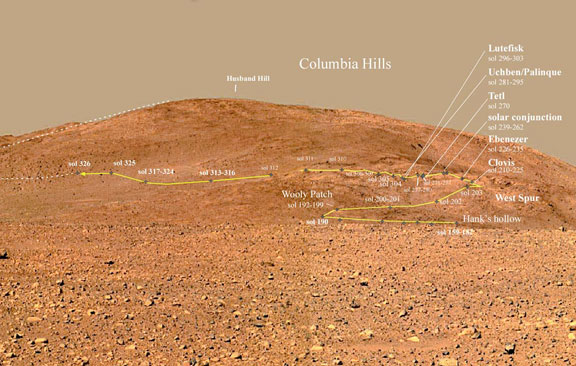