NASA’s Opportunity rover has examined an odd volcanic rock on the
plains of Mars’ Meridiani Planum region with a composition unlike
anything seen on Mars before, but scientists have found similarities
to meteorites that fell to Earth.

“We think we have a rock similar to something found on Earth,” said
Dr. Benton Clark of Lockheed Martin Space Systems, Denver,
science-team member for the Opportunity and Spirit rovers on Mars. The
similarity seen in data from Opportunity’s alpha particle X-ray
spectrometer “gives us a way of understanding ‘Bounce Rock’ better,”
he said. Bounce Rock is the name given to the odd, football-sized
rock because Opportunity struck it while bouncing to a stop inside
protective airbags on landing day.

The resemblance helps resolve a paradox about the meteorites, too.
Bubbles of gas trapped in them match the recipe of martian atmosphere
so closely that scientists have been confident for years that these
rocks originated from Mars. But examination of rocks on Mars with
orbiters and surface missions had never found anything like them,
until now. 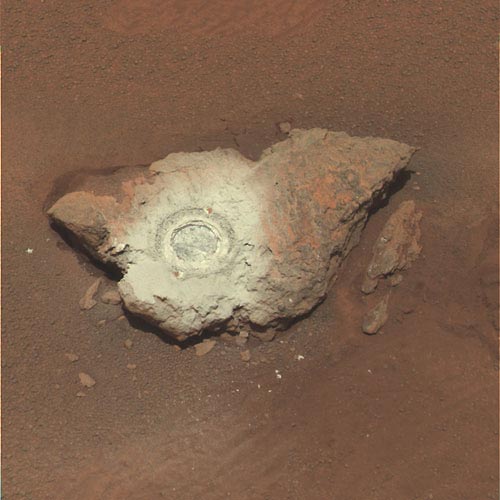 “There is a striking similarity in spectra,” said Christian Schroeder,
a rover science-team collaborator from the University of Mainz,
Germany, which supplied both Mars rovers’ Moessbauer spectrometer
instruments for identifying iron-bearing minerals.

Mars Exploration Rover scientists described two such meteorites in
particular during a Mars Exploration Rover news conference at NASA’s
Jet Propulsion Laboratory, Pasadena, Calif. One rock, named Shergotty,
was found in India in 1865 and it gave its name to a class of
meteorites called shergottites. A shergottite named EETA79001 was
found in Antarctica in 1979 and has an elemental composition even
closer to Bounce Rock’s. Those two and about 18 other meteorites
found on Earth are believed to have been ejected from Mars by the
impacts of large asteroids or comets hitting Mars.

Opportunity’s miniature thermal emission spectrometer indicates that
the main ingredient in Bounce Rock is a volcanic mineral called
pyroxene, said science-team collaborator Deanne Rogers of Arizona
State University, Tempe. The Moessbauer spectrometer also identified
pyroxene in the rock. The high proportion of pyroxene makes it unlike
not only any other rock studied by Opportunity or Spirit, but also
unlike the volcanic deposits mapped extensively around Mars by a
similar spectrometer on NASA’s Mars Global Surveyor orbiter, Rogers
said.

Thermal infrared imaging by another orbiter, Mars Odyssey, suggests a
possible origin for Bounce Rock. An impact crater about 25 kilometers
wide (16 miles wide) lies about 50 kilometers (31 miles) southwest of
Opportunity. The images show that some rocks thrown outward by the
impact that formed that crater flew as far as the distance to the
rover. “Some of us think Bounce Rock could have been ejected from this
crater,” Rogers said.

Opportunity is driving eastward, toward a crater dubbed “Endurance”
that might offer access to thicker exposures of bedrock than the rover
has been able to examine so far. With new software to improve mobility
performance, the rover may reach Endurance within two weeks, said
JPL’s Jan Chodas, flight software manager for both Mars Exploration
Rovers.

Mission controllers at JPL successfully sent new versions of flight
software to both rovers. Spirit switched to the new version
successfully on Monday, and Opportunity did late Tuesday.

A parting look at the small crater in which Opportunity landed is part
of a full 360-degree color panorama released at the news conference.
The view combines about 600 individual frames from the rover’s
panoramic camera, said science-team collaborator Jason Soderblom of
Cornell University, Ithaca, N.Y. It is called the Lion King panorama
because it was taken from a high-ground viewpoint at the edge of the
crater, like the high-ground viewpoint used by animal characters in
the Lion King story.